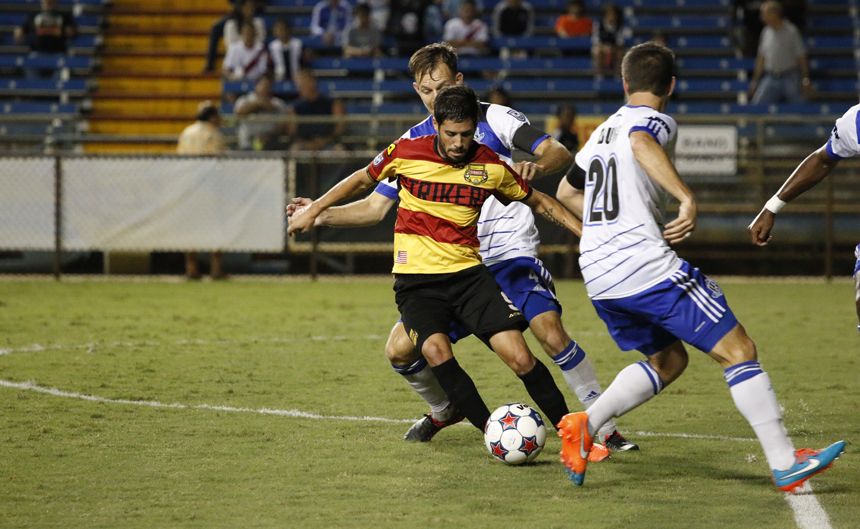 With a single second half goal from midfielder Pecka, the Fort Lauderdale Strikers remained in the driver’s seat for the final playoff spot in the NASL. It was enough for a 1-0 victory over FC Edmonton on the penultimate match-day of the season.

Though the result knocked the Eddies out of postseason contention, it put the south Florida side in position to clinch a playoff berth next weekend with a win at home over already-eliminated Ottawa.

A draw will likely also ensure a postseason berth for the Strikers who have a four-goal advantage over fifth-place Carolina for the first NASL tiebreaker of goal differential.

The Fort Lauderdale win was their fourth in their last six games, all of which have come without a loss.

Here’s a look back at the rest of the weekend’s action in the NASL:

The Spaniard scored his second goal in two weeks to help the RailHawks to a 2-0 win over Atlanta to keep Carolina within tow points of the final playoff spot.

The RailHawks will likely need a win and a Strikers loss to ensure a playoff spot for the first time since 2012.

COSMOS ALL BUT ASSURE NO. 3 SEED

With a 2-2 draw against struggling Tampa Bay, the NASL’s marquee franchise are all-but assured of avoiding No. 1 seeded Minnesota United in the first round of the playoffs.

Results could leave the Cosmos level on points with current fourth-place side Fort Lauderdale, but New York owns a goal differential that is 12 better than their southern rivals. That means the Cosmos will likely travel to No. 2 seeded San Antonio.

Winless in their last nine games, Tampa Bay began the game in the lead thanks to the first of two goals from midfielder Evans Frimpong.

The Cosmos came back with goals from Hagop Chirishian and Euro 2008 winner Marcos Senna before Frimpong scored his second of the match in the 90th minute to split the points.

With a 13-game unbeaten streak heading into Saturday’s match against No. 2 seeded San Antonio, the Scorpions were always facing a tough challenge, and it was the Texan side who finally gave the Loons their first home loss since 2013.

San Antonio midfielder Cesar Elizondo scored the only goal for the visitors in what was seen as a possible Soccer Bowl Preview.

After a poor expansion season, Indy Eleven are finally rounding into form as the club garnered their first-ever three-game winning streak in franchise history.

Goals from Jhulliam and on-loan Chicago Fire midfielder Victor Pineda proved to be enough to give the strongly-supported side a victory over fellow expansion side Ottawa, who scored a consolation goal in the 90th minute through substitute Oliver.

With the win, the Eleven are level on points with the Fury in the combined season, though feature a goal differential that is seven worse than their Canadian rivals.

What did you think of NASL Week 17? Which performances impressed you the most? Which team is looking like a title contender?