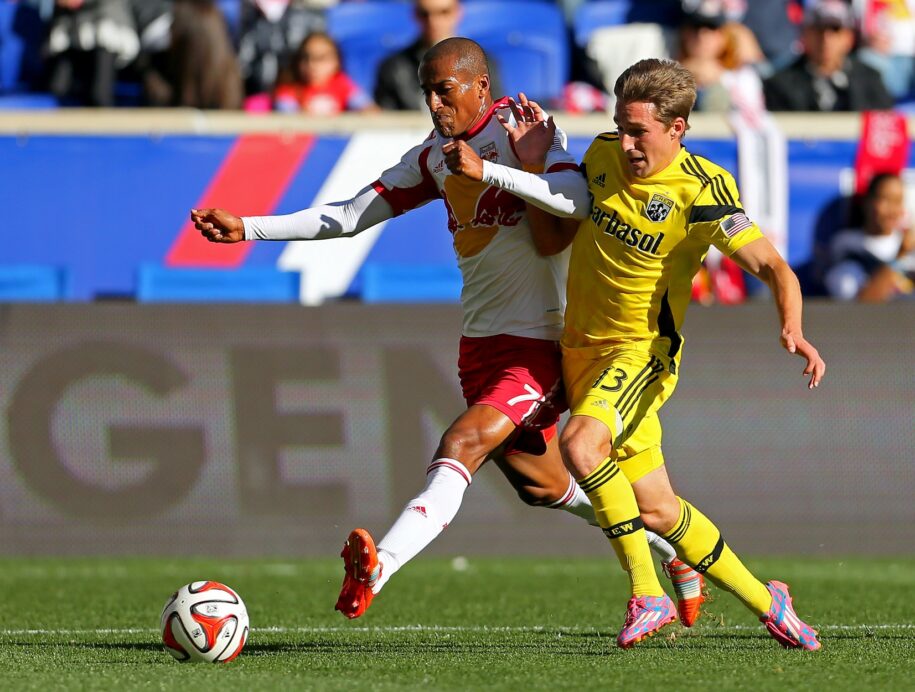 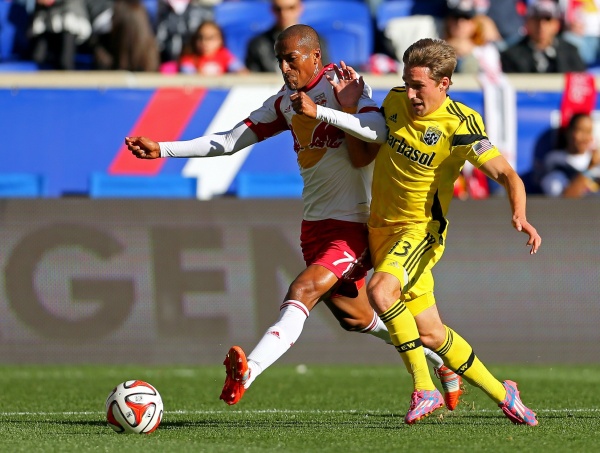 In a matchup that could turn out to be a potential playoff preview, the Columbus Crew appeared to be a team with all of the makings of a true postseason threat.

The Crew overwhelmed the Red Bulls, 3-1, Sunday at Red Bull Arena, as Ethan Finlay picked up a goal and two assists to deal the Red Bulls their first home loss in eight games. With the win, the Crew moved up to fourth place in the Eastern Conference ahead of the Red Bulls, and leave the Crew tied on points with third-placed Sporting Kansas City heading into the final week of the season.

After exchanging chances throughout the first 17 minutes, Crew forward Aaron Schoenfeld opened the scoring with a finish from close range to give the visitors the lead.

Schoenfeld benefitted from the service of Finlay, who found the lanky forward in the center of the box with a cross from the right side. After muffing his first touch, Schoenfeld recovered in time to fire a shot past Red Bulls goalkeeper Luis Robles to put the Crew ahead.

“I feel like I’ve been knocking on the door for a couple weeks now,” Schoenfeld said of the goal, “and I was just glad to finally break through.”

“His work rate along deserved a couple of goals,” added Crew head coach Gregg Berhalter to describe Schoenfeld’s efforts. “You know the amount of energy expended and you know there’s nothing better than when you see a player rewarded for that type of intensity and that type of work.

The Crew added to their lead 17 minutes later through Finlay, whose finish came as a result of a perfectly placed through-ball from former Red Bull Tony Tchani.

With the Crew on the counter, Tchani slid a pass through the Red Bulls backline to a streaking Finlay, who tapped it past Robles to open a two-goal lead.

“It was just strange how the ball got through,” Robles said of Tchani’s pass. “It threw me off. I was a little late coming off my line because I couldn’t believe that ball got through.”

The Red Bulls pulled a goal back in the 58th minute through Lloyd Sam, whose rocket of a shot beat goalkeeper Steve Clark to push the score to 2-1.

After receiving the ball on the right side, Sam split a pair of Crew defenders with some tricky dribbling. The winger then eyed up the far post and unleashed a shot past Clark and into the top corner to restore the Red Bulls’ hopes.

However, those hopes were all but ended by Schoenfeld, who smashed home his second goal of the game to restore the two goal lead.

Finlay once again proved to be the Crew’s catalyst, as the midfielder picked up his second assist of the game on Schoenfeld’s finish. After driving into the box from the right side in the 80th minute, Finlay found a wide open Schoenfeld in the center of the box and, with no Red Bulls defenders closing, the Crew forward fired home to secure all three points.

“It’s been a long time coming,” said Finlay of Schoenfeld’s play. “It was good to be able to set him up… He had a great warm up. He won’t tell you, but he was banging them in in the warm up. When he does that, he’s feeling it and you saw two great finishes today by him.”

“The biggest thing is that we came in and we weren’t scared and we played our game,” Schoenfeld added. “You see the passes that we string together at times and it’s awesome. That was the part that led to success.”

The Crew have a chance to avoid the dreaded wild card game in the final weekend of the regular season when they play host to the Philadelphia Union, while the Red Bulls finish their season with a visit to Sporting Park to take on Sporting KC.