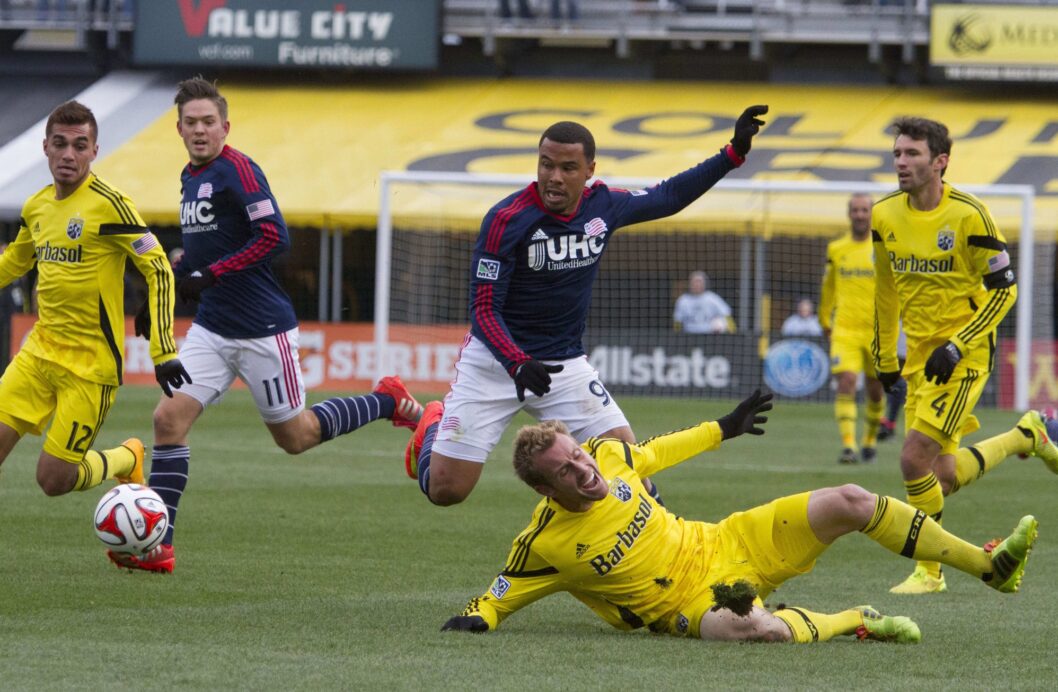 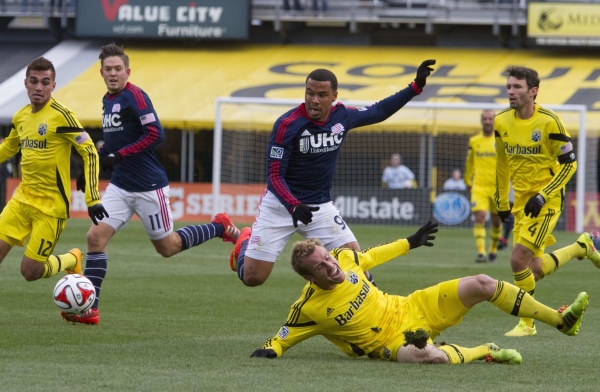 The visiting Revolution routed the Columbus Crew, 4-2, to take a commanding lead of their Eastern Conference semifinals series in the MLS Cup playoffs. Charlie Davies scored a pair of goals for the Revolution, sandwiched by a thrilling free kick goal from Chris Tierney and a crafty goal from Lee Nguyen.

“It’s always difficult to play on the road and I thought we did a nice job tonight and it was a battle all the way through,” Revolution head coach Jay Heaps said. “A lot of goals and a lot of chances. I thought we probably could have had more and we’ve got to tighten ourselves up a little bit, but in the end, you want to get goals and points on the road so that was good from us tonight.”

Justin Meram and Federico Higuain scored for the Crew in the defeat.

After a frenetic start that saw both teams threaten to score, the Revolution went up 1-0 through a Kelyn Rowe free kick that was sent past Crew goalkeeper Steve Clark with a diving header from Davies in the 34th minute.

“It’s definitely something to be very happy about with my performance today,” Davies said as he scored his first career MLS playoff goals.

The Crew hit one back in the 64th minute when Meram found himself open in the box, slotting home and making up partially for his first half miss when he was one-on-one with Revolution goalkeeper Bobby Shuttleworth.

“I felt at that time we were getting momentum,” Crew head coach Gregg Berhalter said. “I was looking more for the 2-2 [score] than 2-1 or 3-1. That’s what we were looking to go for. That probably was our strong stretch of the match when we really started taking momentum in the game, and I felt like give this group another time period to keep that momentum going.”

It didn’t take long though for the Revolution to re-take momentum away from the hosts for good. MVP candidate Lee Nguyen raced forward after being played a ball from Jermaine Jones and dribbled for more than 50 yards at the Crew defense.

After faking a pass, Nguyen slotted home calmly in the 70th minute to put the Revolution up, 3-1.

“Jermaine played me a great ball and I just tried to take the space,” Nguyen said. “Charlie opened up wide left to give me an option, and then I saw Jermaine streaking down too so I was waiting for him to open up that lane. I looked back and he wasn’t there, I think he got knocked down. I just kind of realized I needed to take it on, took a touch, took it past (my defender) and was able to slot it in the opposite corner.”

Davies added the Revolution’s fourth with a tremendous curling effort from around 30 yards out, taking the space given to him by the Crew centerbacks before whacking the ball past Clark.

“Charlie was excellent. I thought he worked hard, I think he could have had more,” Heaps said. “He was close to putting away a couple of other chances. I kind of was on Charlie this week, it wasn’t his best week of training. I thought it was kind of interesting because he said that to me, sometimes when he doesn’t train his best he usually performs on the weekend and that is what he did.”

The Crew gave the home fans one final moment to cheer about when Jose Goncalves was whistled for a handball in second half stoppage time. Higuain stepped up to take the penalty kick and sent a cheeky panenka past Shuttleworth to cut the deficit in half.

“Leading up to the game, we were training well and we were pretty sharp,” Crew centerback Tyson Wahl said. “But I think we showed all around, top to bottom, a little bit of immaturity. They came in and set the tone and physically outplayed us. They deserved to win.”

Following the match, Heaps called some of the officiating decisions, “strange,” as tensions looked to be boiling over in the opening 30 minutes. However, the opening goal from Davies seemed to settle both sides down and make them focus solely on soccer and not engaging in rough play.

“In the end, I thought ‘damn you just hate to see it get crazy at the end’ and you’ve got to turn around and play the same team, so you’ve got to be smart.”