Heaps has Revs on cusp of MLS Cup glory 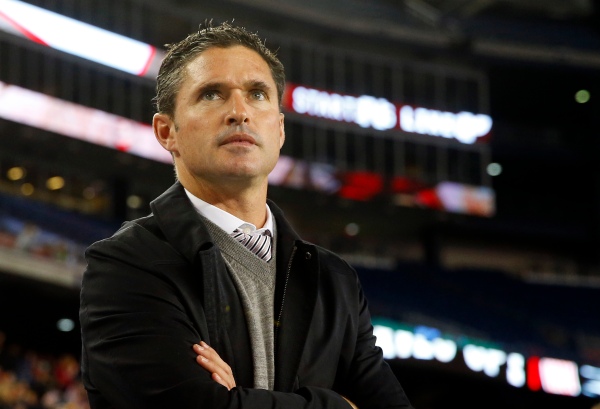 TORRANCE, Calif. — When it comes to MLS Cups, Jay Heaps has been here before. Four times, in fact. He has experienced all the media hoopla, maneuvered through the various distractions, and dealt with the range of emotions.

Heaps is as experienced in dealing with this situation as any other member of the New England Revolution, which is why his role this week is even more important than usual.

The Revolution landed in Los Angeles on Thursday evening after taking a cross-country flight that had an unexpected delay in Texas. When they finally arrived to their hotel, they met with reporters, answering several questions about their upcoming MLS Cup Final match-up against the favored LA Galaxy.

New England’s players talked about the importance of needing to defend as a unit and build on their recent road success. What was not discussed in as much detail, but is equally as vital to the club’s chances of winning its first MLS Cup trophy this Sunday at StubHub Center is the manner in which Heaps prepares and inspires his team.

Heaps, now in his third year as a head coach, has done a near flawless job of that in recent weeks. He has not only guided the club to its fifth MLS Cup Final, but done so by pushing all the right buttons en route to going an incredible 11-0-1 since their last defeat – a 1-0 loss away to the Columbus Crew on Sept. 20.

It’s been down to a combination of his in-game management and tactics that the Revolution have enjoyed so much success as of late, as well as his ability to provide a balance between being businesslike and personable.

“I think this is the important stuff for everything,” said midfielder Jermaine Jones. “This is why we stand right now where we stand, why we have that in the locker room, and you can see that everybody in the team have fun together. I think it starts first by the coaches and they can give it back to the team good.

“The best point was we lost the game in Columbus (during the regular season), and he was not go crazy or change his whole stuff. He tried to come at the team with (the message that) everybody have to be more focused, have to be more concentrated, and if you guys don’t do it, you will not come to the final. I like coaches like this and they don’t give you some (strict discipline) like you run. I know coaches like that, too, so I will say what he do is really good.”

Keeping his players happy has been part of the recipe to New England’s impressive stretch run. Heaps’ affable demeanor has trickled down into the group, which was obvious during each of the Revolution’s last two playoff series. The club was always serious and respectful of its opponents, but never fazed by the moment and always loose, too.

Getting to this point was a work in process, however. Heaps took over the club he used to play for ahead of the 2012 season, and he experienced some serious lumps along the way. New England finished in ninth place in the Eastern Conference in his first year in charge, losing 17 of their 34 games.

The next year, things started to pick up. The Revolution showed promise on their way to finishing in third place and returning the postseason. They were ousted by eventual MLS Cup champions Sporting Kansas City, but took a step in the right direction in 2013 with a team that was young and exciting.

The club’s nucleus returned this season, and, after the introduction of midseason acquisition Jones, helped the Revolution play some of the best soccer that New England has seen in recent years.

“One of things I wanted to do was build a core group of guys and then add the pieces later,” said Heaps. “I thought that was key, that we had a really good core in place and then you add the right piece after. If you do it the other way – if you have the one player and you’re trying to build it around – it sometimes becomes difficult.

“I felt that was the right way to do it.”

Heaps’ approach paid off. Not only did the Revolution finish in second place in the Eastern Conference in the regular season – this despite suffering a club-worst eight-game losing streak that stretched from late May until late July – but also continued to play their exciting brand of soccer.

Heaps, 38, also helped several of his players perform to the best of their abilities. Lee Nguyen reached new heights with his game-changing performances that he was named an MLS MVP finalist. Jones was the subject of much national praise for his seamless transition into the league. Attackers Charlie Davies and Teal Bunbury revived careers that looked to be on serious freefalls.

“He’s the type of guy you want to play for,” goalkeeper Bobby Shuttleworth said. “As a player, he was grinding and working hard and I think he’s kind of instilled that into our team since he’s gotten here. We have a lot of players that are willing to go that extra mile for him because he’s had our back since he’s got here.

“I know for me, personally, he’s been tremendous for me in developing since he got here. I think a lot of the guys are very proud to play for him.”

Heaps is now entering familiar territory, albeit from a different position. He was a starter on the Revolution for each of their four previous trips to the MLS Cup Final, all of which crushingly ended in defeat.

But now that he is back on MLS’s biggest stage, Heaps once again has a chance to bring glory to his team. He might not say it, as he traditionally opts to deflect questions about himself in an effort to put the focus on the team, but this is just as golden an opportunity for himself as it is for New England.

How Heaps prepares his team and keeps them concentrated and light in the coming days will go a long way in determining if the Revolution can finally lift an MLS Cup. His abundance of experience in dealing with the build-up to the title game should help plenty, however.

“Now that we’re here, our focus is 100 percent on the game on Sunday,” said Heaps. “I think early in the week it’s about tickets, it’s about family and that’s all great because they’re part of the process, they’re apart of this whole thing. But once we land here, it’s to maintain that focus and gear up for the game on Sunday.”