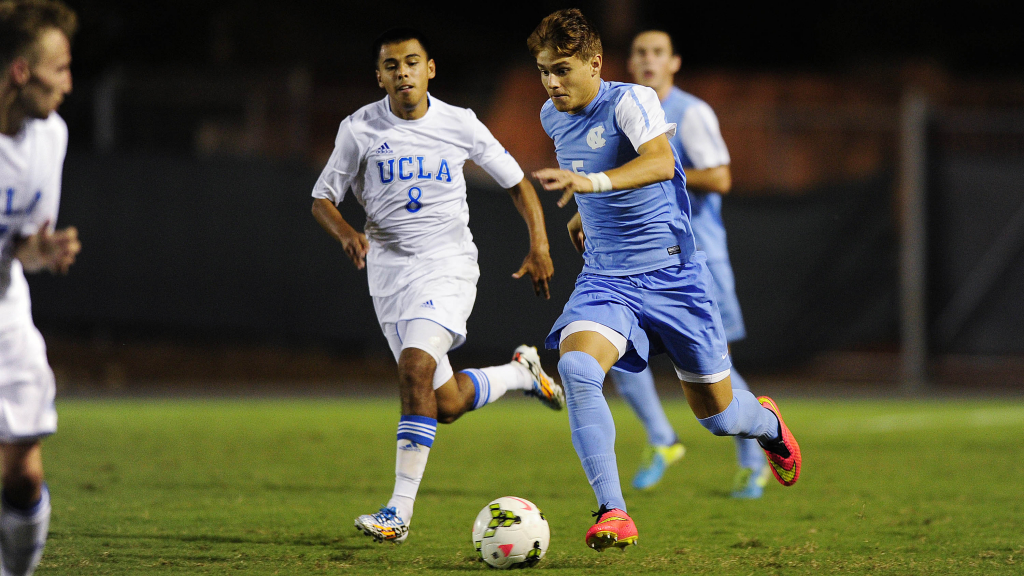 The last time No. 1 UCLA and NCAA darkhorse North Carolina met in the College Cup, the Tar Heels knocked the Bruins out of the semifinals on their way to winning it all in 2011.

Now, these traditional powerhouses will meet yet again Saturday night in this year’s quarterfinals as the two teams attempt to reach the semifinal round for the first time since 2011.

Bruins midfielder and MAC Hermann Trophy semifinalist Leo Stolz is having a spectacular senior year, leading his side in goals and assists with nine and six, respectively. His two-assist performance helped the Bruins top Pac-12 rival California for the first time in three matches this season.

Meanwhile, in each of the three NCAA tournament matches this year, a new Tar Heel forward has stepped up for a team that arguably has the most prolific offense, scoring 49 goals this year, a nation best.

Tar Heel Forwards Andy Craven, Tyler Engel and Rob Lovejoy have all scored at least two goals in the NCAA tournament. Craven is also a Hermann Trophy semifinalist and has a co-nation-leading 14 goals. The Tar Heels lost to UCLA, 0-1, earlier this season, but both sides enter this match determined to reach the College Cup semifinals once again.

Check out the other quarterfinal matchups below:

Another team that is entering uncharted territory: UMBC. As a program, no Retrievers’ team has made it this far in a Division I NCAA tournament, and they have done it the hard way — winning all three matches on the road.

Retrievers forward Mamadou Kansaye converted a penalty kick against Louisville to see them through, but just like fellow quarterfinalist Providence, they have not conceded a single goal in the NCAA tournament.

UMBC may be unbeaten in their last nine matches, but the Blue Jays are familiar with the quarterfinals, making it three times in the last four years.

Blue Jays sophomore and MAC Hermann Trophy semifinalist Fabian Herbers sparked his side past Xavier in the NCAA second round with the first goal of the match. Herbers has 10 goals and eight assists this year, and has led the Blue Jays to have the best record of the remaining teams.

The Spartans have advanced to the NCAA quarterfinals for the second year in a row now, but they will host Big East champion Providence, who have not allowed a goal in both tournament matches.

The Friars have reached a stage of the tournament they have never been to before after topping UC Irvine, 1-0, in the second round of play. Forward Markus Naglestad scored the lone goal, and he leads his side with 10 on the year.

Other contributors, like Mac Steeves with seven goals and Fabio Machado with five goals and seven assists, have helped the Friars reach this point, but they have never beaten the Spartans in their small history against one another.

The Spartans forced overtime and edged Washington, 4-3, in penalty kicks to advance to the NCAA quarterfinals yet again, but they benefited from an own goal to spark their comeback. The Spartans boast a balanced attack with five players having more than four goals and the two co-leaders having only five. So in order for them to reach the semifinals, they will need good play from the team, specifically MAC Hermann Trophy semifinalist Jay Chapman.

The Cavaliers knocked out reigning national champion Notre Dame in the third round, but they will still play another away match as they meet the Hoyas Saturday.

Similar to Michigan State, the Cavaliers rely on team play rather than individual performance. Out of the teams remaining, Virginia has scored the least amount of goals, 25, this season. Senior and team-leading goalscorer Eric Bird did not play in the upset victory, but the Cavaliers would like to have him available for Saturday’s affair.

During the regular season, the Hoyas did not allow many goals, but they have allowed at least one in both of their NCAA tournament matches so far. However sophomore defender and MAC Hermann Trophy semifinalist Josh Yaro will hope to prevent the Cavaliers from knocking them out of this year’s tourney.