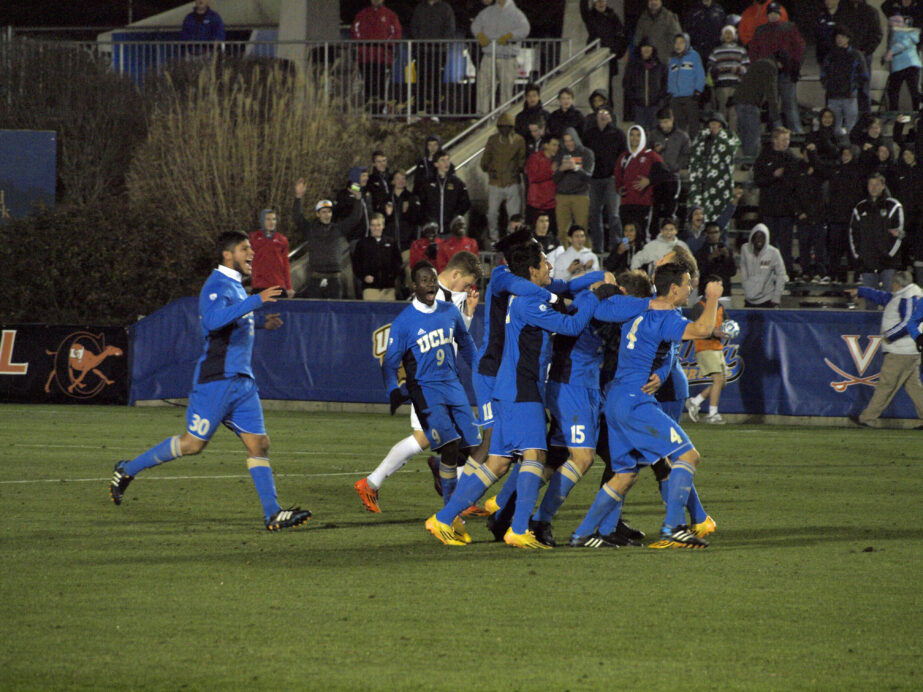 Cary, N.C. — In their third overtime game of the tournament, the UCLA Bruins found their golden goal.

The Bruins knocked out the Providence Friars, 3-2, after scoring a golden goal in the second overtime period, as Chad Gasper’s shot deflected off a Providence defender and in to send UCLA to the College Cup final against Virginia.

“I had a feeling it would come to my area and just swung away, and I got a lucky deflection,” Gasper said. “As the coaches like to say, good things happen when you put the ball on target, and that’s what happened.”

With less than three minutes remaining in the first half, UCLA took the initial lead after Bruins forward Larry Ndjock finished at a tight angle. Ndjock’s initial shot was saved by Friars goalkeeper Keasel Broome, but the rebound fell at his feet, and he calmly slotted it into the empty net.

“Tonight’s match was a microcosm of basically what our postseason has been like,” Bruins head coach Jorge Salcedo said. “We had some moments of real quality, we had some moments with some difficulties in the match, but I attribute the challenging moments that we had to the quality of opponent we had.”

The Friars did not stop pressing, and they found their outlet down the left side. In the 65th minute, Thomas Ballenthin swung in a cross from the left and forward Mac Steeves powered the header home for the equalizer. Approximately nine minutes later, the two connected yet again down the left side. This time, Steeves volleyed in the go-ahead goal.

“We scored some good goals all year through combination play,” Friars head coach Craig Stewart said after the match. “(Thomas) is an attacking full back who looks to advance, and he has a great left foot, sending in a great ball with a great finish.”

But the Bruins did not give up, and the two forwards combined to find the second equalizer of the evening. Forward Abu Danladi attacked the right and sent in a deflected arching cross. Ndjock waited for it to come across the box, then he headed it past Broome for his second of the night.

“Abu, everybody knows, is a great forward,” Ndjock said of his partner. “He’s a great player, and we just tried to help each other today.”

The two could not find a winner in the first overtime period, but in the 105th minute, Gasper sent a one-time shot toward goal, and it was deflected into the net off of a Providence defender in the box. For the third time in this year’s NCAA tournament, UCLA played extra time and still progressed.

The Friars had never made it to this part of the NCAA tournament, and they felt like they could have been in the final.

“I think all three goals could have been avoided,” Friars midfielder Phil Towler said. “I think that there have been times during the season where it has gone our way, and tonight, obviously, it didn’t three different times.”

UCLA will meet Virginia in the College Cup final on Sunday. The Bruins have won the title four times in program history, but they have not won it since 2002.