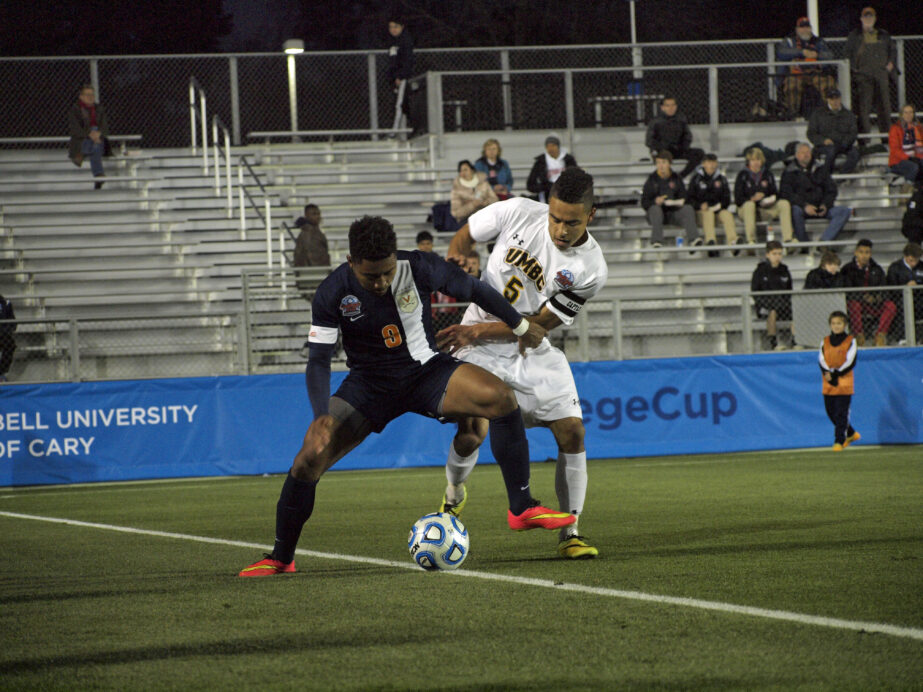 Cary, N.C. — The Virginia Cavaliers are heading to the 2014 College Cup final after knocking out tournament underdog UMBC, 1-0, in the first semifinal.

The Retrievers conceded their first goal in the 2014 NCAA tournament in the 5th minute on a finish from the Cavaliers’ Darius Madison. After the Retrievers dominated possession throughout the first few minutes, Cavaliers midfielder Pablo Aguilar pounced on a bad touch in the attacking half and slipped Darius Madison a pass to his right.

Madison blasted the shot across Retrievers goalkeeper Billy Heavner, silencing the boisterous Retrievers crowd behind him.

“I took a good touch and put it in the back of the net,” Madison said after the match. “I think it did wonders for us because we’re always defensive first, and it allowed us to sit back and relax and just focus on our tactics more.”

Cavaliers head coach George Gelnovatch said his side has a team-mentality of not conceding goals, while praising Madison for the timing of his finish.

“The corners were coming as a result of the crosses, us trying to clear them and stuff like that, and statistically speaking, if you have a team that’s committed to defending like we are, and you’re crossing the ball all the time, I like our odds,” he said. “(Madison) picked the perfect time to have a good game, and I hope he has one Sunday.”

Retrievers head coach Pete Caringi Jr. said the ball was not bouncing their way today, but he made sure to credit the Virginia defense for their ability to stay structured throughout the whole match.

“The first 15 minutes of the game, we were surprised on how they came back out and dropped back,” he said. “They scored an early goal, and that was the first goal we have given up in the tournament, and that caught us off guard.”

The Cavaliers have won six NCAA championships with their last one coming in 2009, which was also the last time the College Cup was played in Cary, North Carolina. They will play the winner of the second semifinal match, either UCLA or Providence.