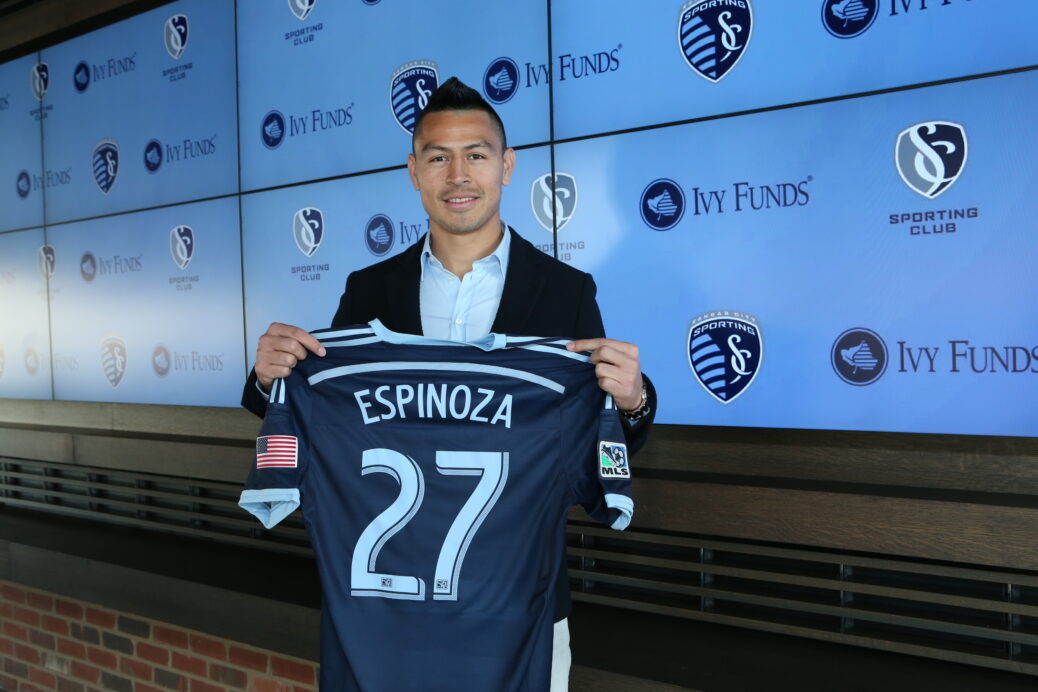 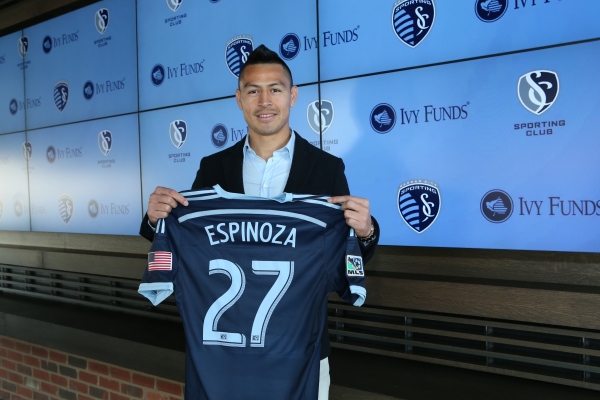 KANSAS CITY, Mo. — Prior to leaving the club who drafted him for the Premier League and Wigan Athletic a little more than two years ago, Roger Espinoza made a promise to Peter Vermes.

If he ever wished to return, he was to call right away.

Vermes and Espinoza would speak often following his free transfer to the English side.

“Every once in a while we would joke and he would say, ‘Hey, maybe I want to come back,'” Vermes added. “But that was just joking around and banter.”

Still, the Sporting Kansas City manager knew deep down that the call would come. It took just a year and seven months.

“I knew my contract was coming to an end. I had to think about what I wanted to do,” Espinoza said Tuesday after being officially introduced again as a Sporting KC player. “I already had the experience of being in Europe, and that’s what I wanted to know: what it was like to be there. Had I not gone, I would not have been very happy with myself. I called Peter, spoke to him and decided to come back.”

However, the move wasn’t going to be easy. Wigan was relegated to the Championship following the 2013 season in which the club stunningly captured the FA Cup title over Manchester City. Espinoza was rarely seeing the field, but injuries kept him tied to the team as an asset, and unable to return to Sporting KC.

One thing was for certain, though: Espinoza wanted to come back, and Vermes and the entire organization in Kansas City wanted him back. Eyes quickly turned to January, and the ball started to get rolling.

“After awhile they (Wigan) said, ‘We can let you go — we don’t want you here if you don’t want to be here — but we want a transfer,’ Espinoza recalled. “I would have been fine with a transfer anywhere else in the world, but not Kansas City. I’m not okay with that. I left here on a free transfer. I thought it was fair for them to return the favor back.

“I kept telling them, ‘I’m not going anywhere else but Kansas City.’ I came back to them later and we shook hands that they would let me come back. It just took a matter of time for people to come back from injuries.”

December 30 was the day. A 10-man Wigan side featuring Espinoza dropped three points to Sheffield Wednesday at home. Following the match, Espinoza told the front office that he was leaving the next day.

Reports stateside started to pick up as a result. Then, Tuesday, all was made official when Espinoza and Vermes sat down to make the announcement that Sporting KC fans have been begging for since his departure in November 2012.

“It’s simple, he’s coming back here,” Vermes said. “He found out what it was like over here and he wanted to come back to Sporting Kansas City because of the way things are done here. And I seriously mean that. I know this club is special, it’s a special environment.”

“I remember telling Peter, ‘I love Kansas City.’ I wanted to stay here, but I had a dream to play in the Premier League,” he said. “Thankfully that dream came true. I always knew I would come back to Kansas City, I just didn’t know when it would be.”

With his transfer completed, approved by the league early Tuesday morning, Espinoza will rest and prepare for February’s preseason training. Though enough has changed since his departure, including the club earning a second MLS Cup, to warrant a “transition period”, Vermes expects his talented midfielder to pick up on everything and lead what is now one of Major League Soccer’s most talented midfields.

“What I think is great is that he’s been here and he understands everything,” Vermes said. “He was one of the main components in building the culture and ethos of this club. Him getting back into that will be pretty quick.”

On March 8, Espinoza will return to where everything started in terms of his rise in the world of soccer. It’s been a long journey from Kansas City to England and back, but Espinoza cannot wait to return to place he’s long called home.