USMNT starts well, but fades in second half as Chile rallies for comeback win 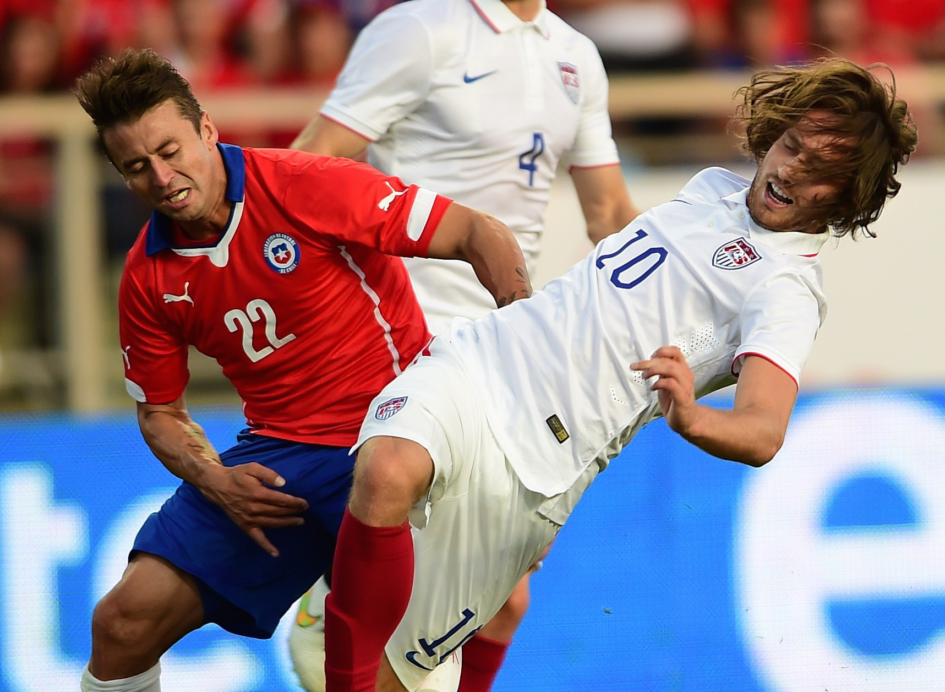 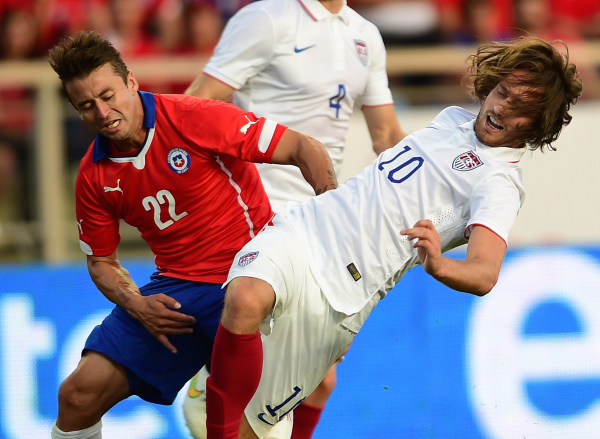 A new formation at the start of a new year showed some promise, but the U.S. Men’s National Team couldn’t avoid starting 2015 with another winless result.

The U.S. began 2015 with a 3-2 road loss to Chile on Wednesday evening, falling prey to a second-half brace from Mark Gonzalez at Estadio El Teniente. Brek Shea and Jozy Altidore gave the Americans two separate leads in the first half, but the U.S. faded after switching formations at halftime and failed to come out victorious for the fifth straight match.

Jurgen Klinsmann’s side, which started the friendly in a new-look 3-5-2 lineup but switched to a 4-4-2 in the second half, was punished by Gonzalez’s excellent play on the Chile left flank.

Gonzalez set up the hosts’ first equalizer in the 10th minute, and went on to beat U.S. goalkeeper Nick Rimando with a pair of strikes in the second stanza that came nine minutes apart.

Three U.S. players made their international debuts in the match, with D.C. United’s Steve Birnbaum earning a start in the three-man back line and Wil Trapp and Gyasi Zardes coming off the bench.

Shea and Altidore each netted their first goals for the U.S. since joining MLS clubs this winter. Shea netted the opener six minutes in after latching onto a superb aerial ball from centerback Matt Besler, and Altidore one-timed his 26th international goal in the 31st when Mix Diskerud fed the striker with a short pass inside the penalty area.

Chile had several chances of its own against a 3-5-2 formation that saw the U.S. find success out wide but struggle with possession. Gonzalez set up Chile’s first goal, crossing a ball from the left that Roberto Gutierrez nodded home perfectly after shaking free from a stagnant Besler.

U.S. right wingback DeAndre Yedlin had a good opportunity four minutes later to put his side back in front, but pulled his shot wide of the Chilean goal.

The Americans, who appeared to be avoiding hitting long balls in an effort to build out of the back, almost conceded on two other looks in the first half. Another Gutierrez headed goal was called back for offside, and Rimando came up with a huge block from close range to deny Diego Valdes after centerback Jermaine Jones committed a poor turnover.

Klinsmann deployed the U.S. in a 4-4-2 to start the second half, but the Americans were unable to keep up with Chile’s tempo and conceded a number of good looks.

Gonzalez eventually evened the match in the 65th minute, racing in behind the defense and firing a Bryan Carrasco pass to the near post past Rimando.

Nine minutes later, Gonzalez found the winner when he blasted a rebound into the back of the net with an impressive effort.

The U.S. struggled to create much in the second half, but almost found a third through a Michael Bradley blast from distance that was denied by the crossbar.

The Americans will now return back to the United States to prepare for a Feb. 8 friendly at home against Panama.

What did you think of the USMNT’s 3-2 loss to Chile? Who impressed/disappointed you? What are your early impressions on the 3-5-2 formation that Klinsmann used?