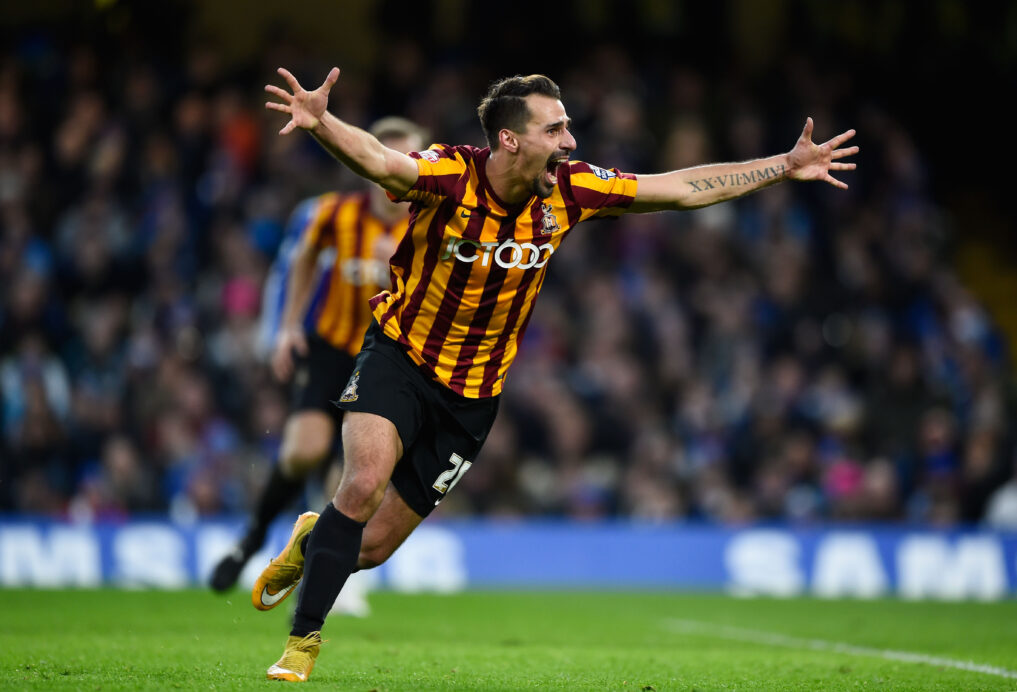 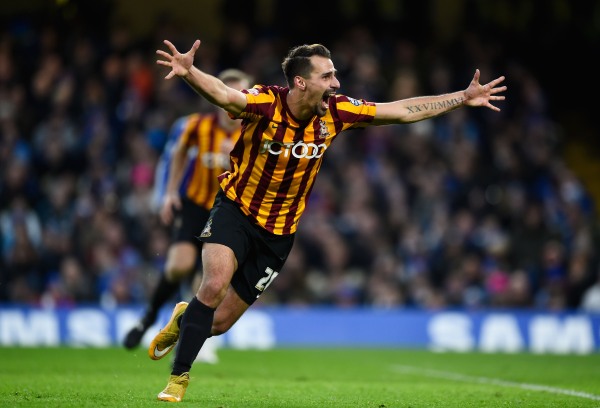 England’s top three teams will have to wait until next year to add another FA Cup to the trophy cabinet.

League One side Bradford City shocked English Premier League leaders Chelsea, rallying from a 2-0 deficit to post a  4-2 comeback victory. The Blues were up 2-0 after 37 minutes before their League One visitors struck back.

Goals from Gary Cahill and Ramires had Chelsea cruising in the fourth-round match, but Jonathan Stead’s 40th minute goal for Bradford gave them some momentum ahead of halftime.

The Bantams used that as a springboard for three more unanswered goals in an unprecedented display. Chelsea threw on Willian, Cesc Fabregas and Eden Hazard in the final 20 minutes, just as Felipe Morais equalized for Bradford and Andrew Halliday scored the winner in the 81st minute.

Mark Yeates’ 90th minute goal was the icing on the cake for what will surely be the shock of the round on a day filled with surprises.

Manchester City was also stunned on Saturday, dropping a 2-0 decision against Middlesbrough. There were also losses for Swansea City, Southampton, and Tottenham.

Here is a rundown of Saturday’s action throughout Europe:

Manchester City might rethink its future mid-season friendly plans after they crashed out of the FA Cup in the fourth round.

Fresh off the plane from a trip to Dubai, the Citizens suffered a shocking 2-0 loss to Championship side Middlesbrough.

After a goalless first half, Boro struck first through sheer determination. Albert Adomah beat goalkeeper Willy Caballero to a poor Man City back pass and poked it past the Argentine. Patrick Bamford, on loan from Chelsea, rushed in to touch the ball into an empty net to give the underdogs the lead.

Bamford secured the dream result in stoppage time when he set up a Kike finish to seal City’s fate.

Third-placed Southampton was also eliminated in a 3-2 loss to Crystal Palace at home. In a five-goal first half, Palace grabbed the crucial goal with a  38th-minute strike from Marouane Chamakh.

In the early match, Blackburn upset Swansea in a 3-1 win. Elsewhere, Tottenham was undone by a 2-1 Leicester City comeback effort. Liverpool will replay its game against Bolton after a 0-0 draw.

Here are all the results from Saturday’s FA Cup action:

Chasing a win late, Real Madrid was comfortable with its leading scorers prowling in the Cordoba goal area.

That was until Cristiano Ronaldo decided to strike a Cordoba defender, kick another and receive a red card in the 82nd minute. The moment of madness was followed by an 89th minute Gareth Bale penalty to seal a 2-1 Real win.

It was all part of a frantic final 10 minutes in which Cordoba’s Federico Nicolas Cartabia was also sent off for his second yellow card. He blocked a Bale free kick with his arm inside the box to set up the winning goal.

Cordoba put pressure on the league leaders with 11 shots, four of which were on goal. Nabil Ghilas gave them the lead in the third minute with a converted penalty kick.

Real was fortunate to get the late win since La Liga title rivals Barcelona breezed past Elche 6-0. Lionel Messi and Neymar each scored twice after Gerard Pique broke the deadlock in the 35th minute. Pedro capped the win with a stoppage time goal.

The win keeps Barcelona one point behind Real, though Los Blancos have a game in hand.

Dimitar Berbatov’s 57th minute goal kept AS Monaco in the UEFA Champions League race in a 1-0 win against Lille.

Monaco stretched their winning streak to four games, and they remain unbeaten since Nov. 29 in all competitions.

Cagliari climbed out of the relegation zone in a 2-1 win against Sassuolo.

Luca Rossettini scored a goal at both ends, putting Cagliari ahead before a 77th minute own goal leveled things up. Two minutes after that unfortunate moment, Duje Cop gave them the valuable win.