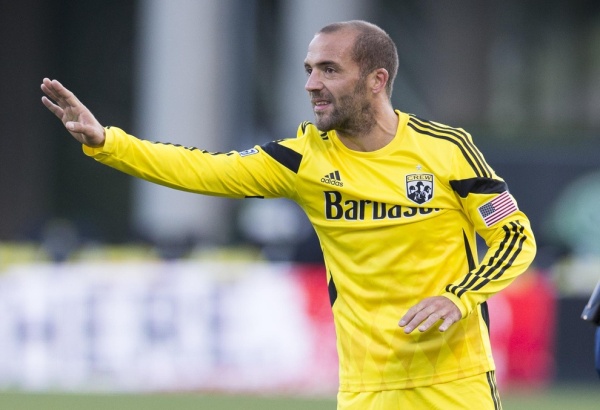 The latter part of Federico Higuain’s 2014 was derailed due to injuries, but the Columbus Crew attacking midfielder is back to full health and ready to kick off a new season.

After battling a string of nagging injuries, Higuain was finally forced to sit out the second-leg of the Crew’s playoff series with the Revolution with a torn calf muscle. But three months later, the Argentine is happy with how his recovery has gone.

“I feel good, I feel very good,” Higuain said on a conference call. “The injury (from last year) is no longer there. I feel good now for preseason, we’re trying to put ourselves in form here and it’s looking good.”

Despite the health issues, Higuain tallied 11 goals and seven assists last season. In January, he signed a new Designated Player deal to keep him with the Crew through 2016. The club called  Higuain’s deal “the largest contract ever signed” in Crew history.

Over the club’s three years in MLS, the Montreal Impact have quickly slid down the league’s attendance list. Entering 2015, team owner and president Joey Saputo worries they could slip even further.

Attendance in Montreal was down about 15 percent last year alone as the Impact struggled through a season that saw them finish at the bottom of the standings.

“If people are saying ‘Let’s see what kind of team we have before buying season tickets,’ I can say we did our part,” Saputo told the CBC. “We changed the team.

“We saw what wasn’t working last year. We brought in 11 new players. The 12th player, our fans, is tougher to sign.”

With only about 5,000 season tickets sold, the Impact project that the club could place as low as 13th in MLS attendance this season. That’s a big departure 2012, when they broke into MLS and posted the third-highest attendance in the league.

With the knockout stages of the CONCACAF Champions League looming later this month, the Montreal Impact needed a goalkeeper.

As a result, German Kristian Nicht has joined the Montreal Impact on a short-term loan from NASL’s Indy Eleven.

“We needed to add Kristian due to a unique circumstance,” said technical director Adam Braz in a statement. “We needed another goalkeeper for the Champions League as Maxime Crepeau has a shoulder injury and Eric Kronberg is ineligible for the tournament after having played with Sporting KC.”

The 32-year-old goalkeeper will stay with the Impact through March 4.

Nicht spent the majority of his career in the German first and second divisions, but has been in North America since 2012. After two seasons with USL PRO’s Rochester Rhinos, he moved to Indy Eleven last year and made 29 starts during the 2014 season.

The Seattle Sounders kicked off their preseason slate with a 5-0 win against UCLA on Wednesday night in Walnut, Calif.

Obafemi Martins and Lamar Nagle found the net in the first 45 minutes. Chad Barrett, Kenny Cooper and Michael Azira each added a goal in the second half.

The Sounders will scrimmage the Los Angeles Galaxy on Friday, then return to Washington for a week-long training stint at the team’s Starfire complex.

New Designated Player signing Shaun Maloney captained the Fire in his first appearance for the team and played the first 45 minutes.

The Fire’s best chance came in the opening minutes, when Kennedy Igboananike was played in behind the Norwich defense and tried to chip the goalkeeper, but was denied by a diving save.

What do you expect from Higuain this season? Concerned with the Impact’s attendance? What do you make of Thursday’s preseason results?