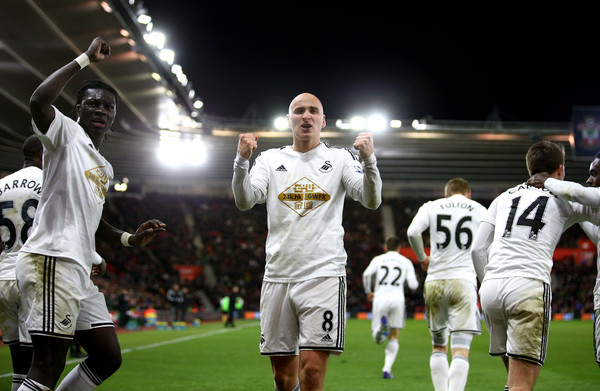 Five of the Premier League’s 20 clubs currently feature an American owner, and Swansea City may soon become the sixth to join that group.

Club director Huw Cooze revealed Monday that Americans John Jay Moores and Charles Noell, owners of the San Diego Padres, have been in negotiations with the club since last fall with the aim of acquiring a 30 percent stake in the team.

Swansea is the only Premier League club represented by a Supporters Trust, who own 21 percent of the team.

“Talks are ongoing and there’s nothing on the table yet, no offer,” Cooze said. “But I would imagine they would make that offer and be coming in here in the next month or so. If they do we’ll have to cross that bridge then, but the Americans and our own shareholders know the Supporters’ Trust shares are not for sale. They never will be and they appreciate that, and we will work with them if it happens.

“The club’s lawyers are dealing with things as we speak, but people here still feel they have a big part to play even if the Americans come in. It is only 30 percent of the shareholding they are interested in purchasing at this present time, but the Supporters’ Trust will not sell any of its shares and it will be others that get slowly diluted.”

Here are some more of Monday afternoon’s news and notes:

CAPELLO UNDER PRESSURE TO QUALIFY FOR EURO 2016

Fabio Capello’s mission is clear: qualify for Euro 2016 or face the consequences.

Russian Football Union president Nikolai Tolstykh says that Capello’s contract states that he could be fired if the nation fails to qualify for the continental tournament. Russia currently sit third in their qualifying group, five points behind first-place Austria.

“The contract provides the RFU with the possibility of sacking the coach in case of the team’s poor results,” Tolstykh said according to L’Equipe. “The non-qualification of the team for Euro 2016 would be seen as a breach of contract.”

It didn’t take much convincing for Tim Sherwood to accept the position as manager of Aston Villa.

Sherwood, who was officially announced as manager on Sunday, says that the decision was a “no brainer”, despite the current struggles that see the team sitting five points from last place.

“When I got the call it was a no brainer,” Sherwood said according to BBC. “I said ‘yes, I’ll take the job’ then negotiate afterwards. Everyone is surprised to see where they are. But they are not here for no reason. They are a giant club with a lot of history. I will do whatever I can to take us over the line.

“When I came here as a player I found it a difficult place to get a result. I want to turn it into a fortress. I’ve come from one big club to another big club. It is a fantastic opportunity for me. I will give 100% to keep Villa in the Premier League and then try to move it on in the future.”

Zlatan Ibrahimovic did his best to try and raise awareness for world hunger, but Paris Saint-Germain manager Laurent Blanc is far from happy with his striker’s actions.

While the manager admitted his sympathy for the cause, Blanc was frustrated with Ibrahimovic’s decision to celebrate by removing his shirt to reveal the names of those suffering from hunger. Blanc says that the Swede’s ensuing yellow card could have cost both Ibrahimovic and the team in the long-run.

”I was aware of his commitment to the foundation, but personally I didn’t know that he’d had several names tattooed on him,” Blanc said according to Fox Sports. ”If it was to show his tattoos then it worked because it made the front page of every website in the world, so in that sense it was very successful for him and for the foundation. But it cost us a yellow card.

”Imagine if the game had become more heated and that he’d got a second yellow card. The game would have been over for us,” Blanc added. ”I don’t know if taking his shirt off was a good thing. I hope he won’t take his shirt off if he scores tomorrow because he will get another yellow card. So it’s something to ponder.’

Wilfried Bony joined Manchester City for training for the fist time Monday after spending the past month at the African Cup of Nations with the Ivory Coast. (REPORT)

FIFA have clarified that Barcelona can sign players but not register them through their current transfer ban. (REPORT)

Hulk has signed a two-year extension to remain with Russia’s Zenit through 2018-19. (REPORT)

What do you think of the potential Swansea bid? How do you expect Russia to fare in Euro qualifying? How will Sherwood impact Aston Villa?