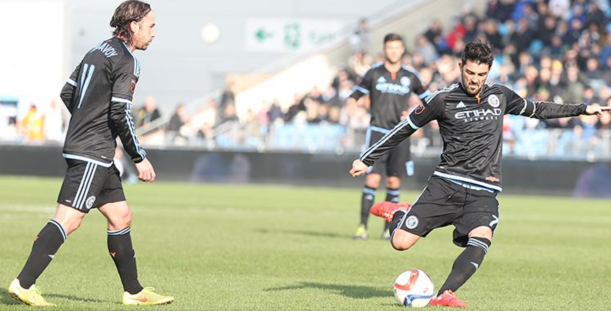 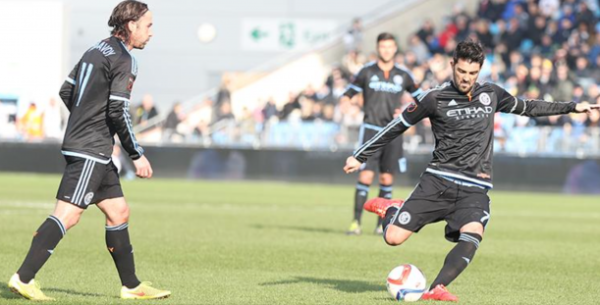 New York City FC opened its preseason by knocking off St. Mirren, 2-0, but the MLS newcomers found themselves on the opposite end of that scoreline when they took the field on Sunday.

Danish club Brondby handed NYCFC a 2-0 defeat on Sunday at Manchester’s City Football Academy. The match, which saw goals from Brondby’s Martin Ornskov and Ferhan Hasani, served as the NYCFC debut for Mix Diskerud, who was with the U.S. Men’s National Team for the club’s prior friendly.

Despite the result, head coach Jason Kreis says that Sunday’s loss was a major learning experience, as the club needed some mistakes to reflect on.

“We would have loved to have a better performance in our back pocket going home,” Kreis said, “but in some ways we needed some negativity as well.

“We know there is a lot of work to be done.”

NYCFC takes the field again on Saturday against Orlando City at the Carolina Challenge Cup.

Here are some more MLS preseason results from the weekend:

To the victors go to the spoils and, for D.C. United, the spoils came in the form of an armadillo trophy.

The game’s lone goal came via Chris Rolfe, who scored the winner with a long-range effort. Following a Fabian Espindola free kick, Rolfe collected, evaded a defender and fired a shot from distance into the top corner.

With the victory, D.C. United took home the tournament’s armadillo trophy, which turned out to be a favorite of defender Bobby Boswell.

“I can say without a doubt it’s the most unique,” Boswell said. “It’s one thing to be an armadillo, but it’s a different thing to have a gunslinger belt on. For me, that takes it to the next level. D.C. United better keep their doors locked because if not, it’s coming home to me in my house.”

The two sides will meet again Friday in Frisco, Texas.

Chris Wondolowski wasted little time upon his return to the San Jose Earthquakes from the U.S. Men’s National Team.

The forward scored in the 43rd minute as the Earthquakes topped the Colorado Rapids, 2-0, Sunday.

Wondolowski’s finish came in the closing moments of the first half on a sequence that was set up by the speed of Jordan Stewart. After getting down the left side, Steward played a ball to Shea Salinas who proceeded to find Wondolowski. The Rapids failed to clear their lines, giving the forward a chance to finish from close range and open the scoring.

The Earthquakes’ second finish came from JJ Koval, who fired home a Leandro Barrera assist in the 75th minute.

Following the victory, the Earthquakes will be back in action Sunday against Sacramento Republic, while the Rapids kick off the Desert Diamond Cup Wednesday against Sporting KC.

Following a loss to FC Dallas in the opening round of the ATX Pro Challenge, the Columbus Crew were given a chance to rebound Sunday agains the tournament’s hosts.

The Crew did just that by picking up a 1-0 victory over the Austin Aztex to claim third place in the tournament.

Chad Barson provided the game’s lone goal in the 85th minute by tapping home a back-post cross from Justin Meram.

The Crew’s next outing will take place Wednesday in Bradenton, Florida for a matchup with Congolese side TP Mazembe.

Pedro Morales led the way for the Vancouver Whitecaps in a matchup that ended up being a goalscoring frenzy.

Morales contributed a goal and two assists as the Whitecaps topped the University of Victoria, 6-0, on Sunday.

The Chilean midfielder was joined on the scoresheet by Russel Teibert, Marco Bustos, Ovtavio Rivero, Diego Rodriguez and Kianz Froese.

The Whitecaps will now travel to Portland for the Simple Invitational which will kickoff with Saturday’s matchup with the Portland Timbers.

What do you think of this weekend’s results? Which games and players stood out to you?