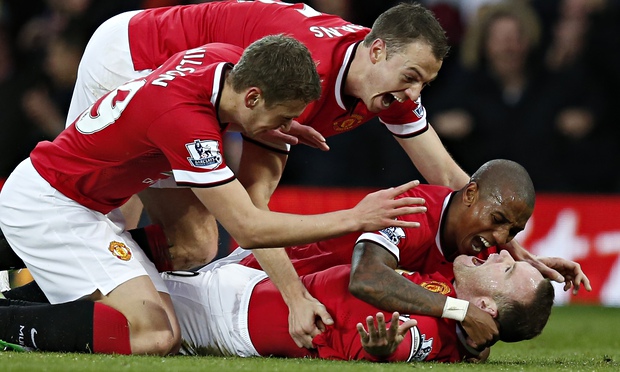 In search of goals, Manchester United turned to one of its most reliable sources in the past decade.

Wayne Rooney scored twice in the Red Devils 2-0 win against Sunderland, making him the first player in English Premier League history to score 10-or-more goals in 11 seasons. The goals came about 20 minutes apart in the second half, but they had been expected for much longer than that.

After surviving a spell of Sunderland dominance in the opening minutes, Man United totally bossed the game. The Black Cats were pinned back during the majority of the time and had to deal with nine shots on target.

The Red Devils were still unable to turn all of this into a goal, and as a result were about to replace Radamel Falcao. Just before that, the Colombian brought a long-ball down neatly in the box and was subsequently pulled down by John O’Shea.

Oddly it was another former Man United center back, Wes Brown, who was sent off in a decision that will surely be corrected by the FA. Regardless, Rooney dispatched the penalty for a 1-0 lead.

He then scored his first goal from open play since Dec. 26 when he headed in the rebound from Adnan Januzaj’s shot. With the win, Man United jumps over Arsenal into third place.

Elsewhere in Europe, a late effort from Borussia Dortmund sealed a win against rivals Schalke. Barcelona brushed Granada aside in La Liga play, and Lyon received a hit in its French league title fight.

Here is more from the action across Europe’s top leagues on Saturday:

The Saints fell 1-0 in what was thought to be a winnable game against West Brom. It is their second straight defeat and third game without a win as a UEFA Champions League spot begins to slowly move further away.

Southampton had enough of the ball to at least grab an equalizer, but 10 of its 13 shots were off the mark. The Baggies’ effort was more smash-and-grab.

Craig Dawson knocked down a long-free kick inside the Southampton area, where Saido Berahino controlled the ball before shooting it into the roof of the net in just the second minute.

Down in London, Crystal Palace continued to find success away from home. A 3-1 win against city rivals West Ham gave Palace its fifth consecutive victory on the road and temporarily moved the team up to 12th.

Here are all the results from England:

Borussia Dortmund is officially on a roll.

Die Schwarzgelben’s late effort against rivals Schalke gave them a 3-0 win and a fourth-consecutive victory in the Bundesliga. After starting the year at the bottom of the table, Dortmund now sits in ninth place, five points away from the relegation zone.

Schalke failed to register a single shot on target while dealing with 13 on goal at the other end. But Dortmund’s attacking prowess did not produce a goal until 12 minutes remained on the clock.

Pierre-Emerick Aubameyang scored after Dortmund successfully recycled a partially cleared free-kick in the 78th minute, and that opened the flood gates. The provider of that opening goal, Henrick Mkhitaryan, then struck a minute later when he connected on a cross at the back post.

Goalkeeper Timon Wellenreuther’s disastrous 15 minutes in the Schalke goal was completed when Marco Reus stole the ball from his feet and poked it into the back of the net.

Here is a full look at the results from Germany:

Barcelona kept the pressure on league leaders Real Madrid with a 3-1 win against Granada.

The Catalan side immediately bounced back from a surprising loss to Malaga last week in typical dominant fashion. Barcelona put nine shots on target, and the opener finally came in the 25th minute.

Luis Suarez’s cross went all the way across the goal before Ivan Rakitic was able to put the ball away. The two switched roles just four minutes inside the second half when Suarez met Rakitic’s cross to double the lead.

Granada showed some fight, enough to put four shots on target and pull a goal back in the 53rd minute. Marc Bartra tripped Lassana Bangoura as the attacker ran inside the box, and midfielder Fran Rico stepped up to convert the penalty.

The two-goal lead was restored for Barcelona, again through Rakitic and Suarez. The Croatian’s long ball forward was corralled by Suarez, who instead of working for a close range finish opted to roll the ball to Lionel Messi for the easy tap-in.

The door is open for Paris Saint-Germain.

Lille did it for the defending champions by beating league leaders Lyon, 2-1, their first defeat in a 12-game streak that stretches back to the end of November. PSG can take first place in Ligue 1 win a win against Monaco on Sunday.

Lyon began the match per usual, with Corentin Tolisso scoring in just the third minute for the lead. A four minute span in the second half saw that advantage disappear.

Idrissa Gueye pulled one back in the 56th minute before Marcos Lopes scored the winning goal in the 60th minute to hand Lille its second league win in six outings.