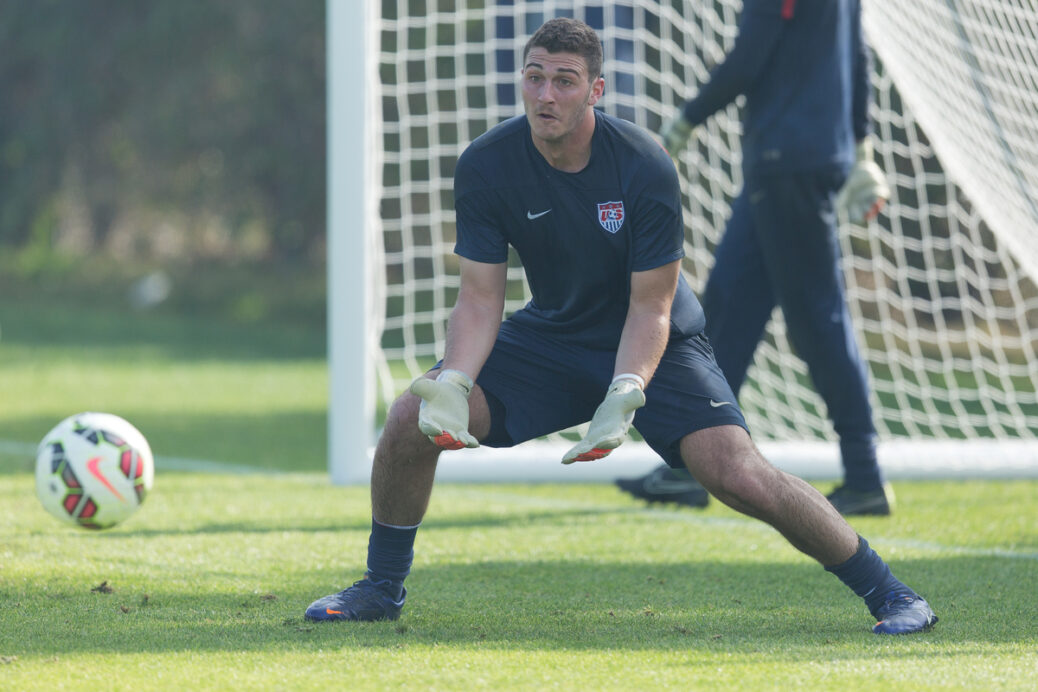 CHAMPIONSGATE, Fla. — Alex Bono was nervous. Heading to grab breakfast one day last month, he was told to introduce himself to some of his new teammates. While that might not seem like a big deal and par for the course for someone who had played three years in the ever-evolving world that is college soccer, it was the people who he had to approach and greet that made him a little tense.

Bono was taking part in his first meal with the U.S. Men’s National Team and had to talk to the larger-than-life players that he had been watching and rooting for just seven months prior at the World Cup. He had to lose the fan habit of calling them by their last names — Bradley, Dempsey, Jones were now Michael, Clint, Jermaine –– and begin talking to them in person like he would anyone else. He was now one of them.

The start of the new year has been as busy as it has been unforgettable for Bono, a 20-year-old goalkeeper who was playing for Syracuse just three months ago. Bono has received a crash course in professional soccer since January, earning a surprising call-up from U.S. head coach Jurgen Klinsmann for the annual winter camp just days before being drafted into MLS by a club with high expectations.

Things have been coming at him at warp speed, but he doesn’t mind it one bit. How could he? He is living the dream he spent most of his life hoping for.

“It’s been almost surreal,” Bono recently told SBI. “From thinking I was going back to school when the year started to being in national camp 10 days later, 11 days later, it was something that I didn’t really feel the full affect of until I got a chance to sit back and kind of let it sink in.”

Along with establishing himself as a prospect in the U.S. pipeline, Bono is also one of the newest members of Toronto FC. Drafted at sixth overall in the 2015 MLS Draft, the 6-foot-3 goalkeeper joined Toronto after spending three impressive seasons at Syracuse. After a stellar junior campaign that saw him emerge as one of the best in the nation, Bono quickly found himself making the sudden transition from college star to pro rookie.

As talented as Bono is and as much potential as he possesses, the Baldwinsville, New York, native knows he is now a “small fish in a really, really big ocean.” He is hungry to get on the playing field as soon as possible, but knows it will probably take some time given his age, lack of experience, and the fact that Toronto has a seasoned starter in Joe Bendik.

“We just talked about his future, especially in the goalkeeper position there’s definitely not a rush to things,” TFC head voach Geg Vanney told SBI of a conversation he had with Bono before the draft. “It’s a position that you have to mature into and you have to put your work in and you have to be able to see and read the game behind a team at a much higher level than maybe he was used to prior to this.

“He has all the tools, he’s a great personality, he has this natural leadership ability in him, he’s vocal behind the group and, for him, it’s just keeping working day to day and adding pieces to his game and continuing to grow in his presence and he’ll be fine. He’s got all the attributes to be a very good goalkeeper.”

While he admitted spending many sleepless nights thinking about the draft, and was eagerly looking forward to the process, Bono was not at the draft, and was not watching when Don Garber announced his name as the sixth player chosen that day. The U.S. had a morning training session on the day of the MLS Draft, and while Bono tried to watch the early parts of it on his cellphone, he had to leave for practice before Toronto FC selected him.

Bono didn’t learn where he had been drafted from Garber, but rather from Jurgen Klinsmann, who gathered the U.S. team in a huddle before announcing the news of Bono’s selection and congratulating the young goalkeeper.

“It was weird that I’m in a training session while all my friends and draftees are in Philadelphia getting called up and going to the podium and that sort of thing,” said Bono. “It was weird for me that the guys in the circle (at training) knew before I did. Michael Bradley knew before I did that I was going to play for his team, and from that perspective it was a little bit weird, but it was a heck of a way to find out where I’d be playing my football.”

Days before that neat moment with Klinsmann — who said “the college fun is over” with a trademark chuckle — and the U.S. players, Bono had another cool and unforgettable experience. He had flown to St. Louis with a few other top college soccer players for the Hermann Trophy presentation when his cell phone rang. It was an unfamiliar number from Orange County.

Wondering who it was, Bono picked up the call. The person on the other line said he was Jurgen Klinsmann. Thinking it was a prank, Bono played along and kept the conversation going until he realized this was no joke.

“I was so excited that I was shaking in the airport with a couple of the other Hermann finalists — ‘Is this kid okay?’ — but I had no clue it was coming,” said Bono, who admitted to wearing the white, collared U.S. jersey last year as a fan. “I couldn’t have dreamed of having a better phone call that day.”

While Bono did not win the Hermann award, he did claim a number of new followers on both his Twitter and Instagram accounts following the official U.S. roster release. People from all corners of the country were curious as to who this relatively unfamiliar college player was that Klinsmann was bringing into camp, and some were even critical as to why a player who lacked professional experience was being called in.

Bono was a bit astonished by all the feedback. Not necessarily because of the negative comments, but because of the sheer volume of it all. It was nothing like he had ever experienced before.

Still, it was a reminder of the world he lives in. Boni is a professional soccer player now, and new, attention-grabbing challenges just come with the territory.

“My goal is to adjust and be ready to go at the MLS level as soon as I possibly can,” said Bono. “When the coach thinks I’m ready, I want to be thrown into the fire and I want to learn while I’m there (also) while winning games in the process. That’s the ultimate goal.