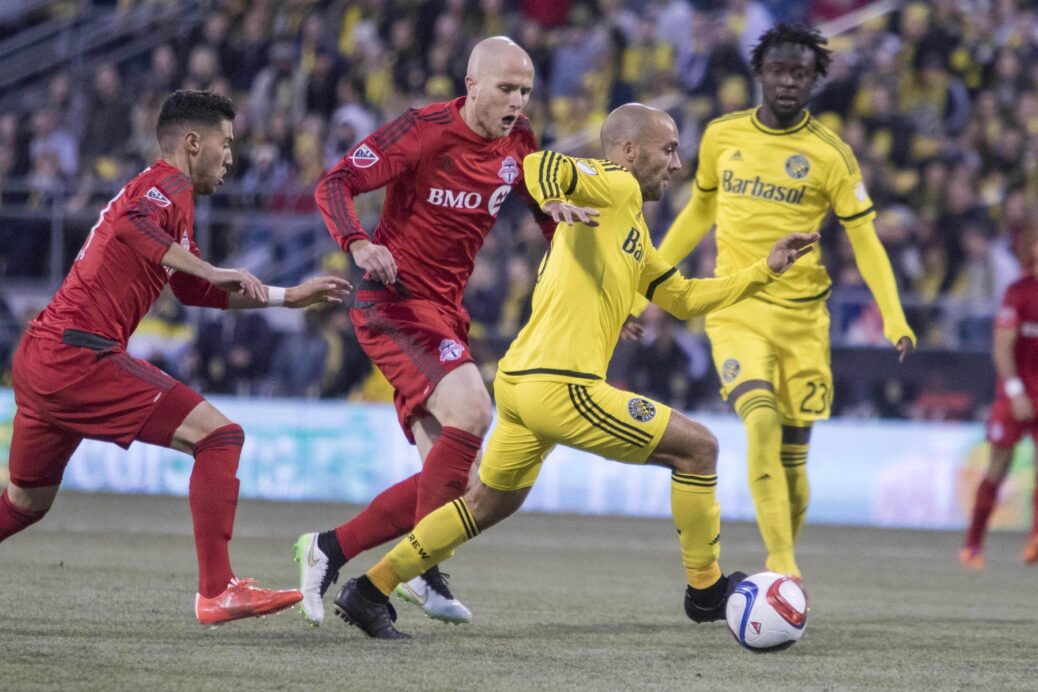 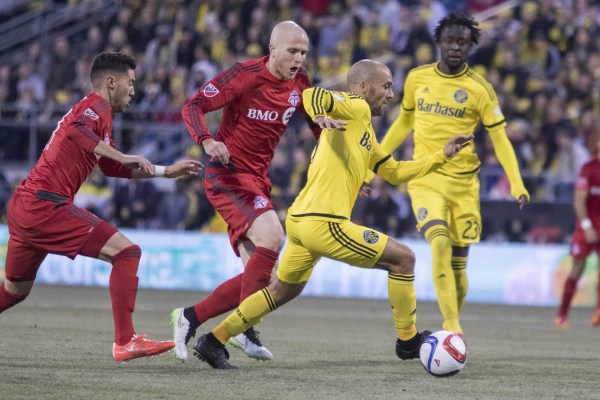 Michael Bradley found himself complaining about questionable referee’s decisions made against his Toronto FC squad quite a bit last year. On Saturday night, another referee gave the U.S. Men’s National Team star plenty of reason to complain.

A highly-questionable red card issued to Justin Morrow in first-half stoppage time paved the way for the Columbus Crew to dominate and eventually pull away from 10-man TFC as goals from Justin Meram and Kei Kamara sparked a 2-0 Crew victory at MAPFRE Stadium.

The Crew outplayed TFC for much of the first half, controlling possession and creating more chances after withstanding some heavy pressing from TFC in the first 25 minutes of the match. Columbus eventually took control, but TFC’s defense was standing firm before the tide-turning call from referee David Gantar.

Ethan Finlay raced in on goal when Morrow slid and appeared to deliver a clean tackle where he clearly reached the ball with ease. Finlay tumbled over Morrow in the process and Gantar, trailing the play, deemed Morrow’s tackle a foul. With Morrow being the last man between Finlay and goal, Ganter chose to stick by his initial call and issued a red card.

Toronto FC head coach Gregg Vanney tried to compensate for the man disadvantage by making a pair of defensive substitutions at haltime bringing in Nick Hagglund and Ashtone Morgan for Steven Caldwell and Jonathan Osorio. The moves were an attempt to give TFC a more mobile defense to cope with being a man down, but the moves hardly helped.

Columbus took full advantage of the red card in the second half, controlling play and eventually breaking through when Meram headed home a Finlay cross in the 57th minute. Just four minutes later, Kamara headed home a perfect cross from Francis that squeezed the life out of an already-fatigued TFC side. That goal also gave Kamara a chance to show off a new goal celebration as he handed out hard hats to a pair of fans and posed for pictures in an ode to the Crew’s old logo.

The victory marked the 13th straight season the Crew have won their home opener, and improved them to 1-1 on the season. Greg Berhalter’s side will have a week off before returning to action on March 28 against the New York Red Bulls at home.

Toronto FC will look to regroup with a bye week before returning to action on March 29 with a visit to Real Salt Lake.

What did you think of the match? Think the red card was a mistake, or think the referee got it right? See the Crew being a force in the East? Not sold on TFC yet?