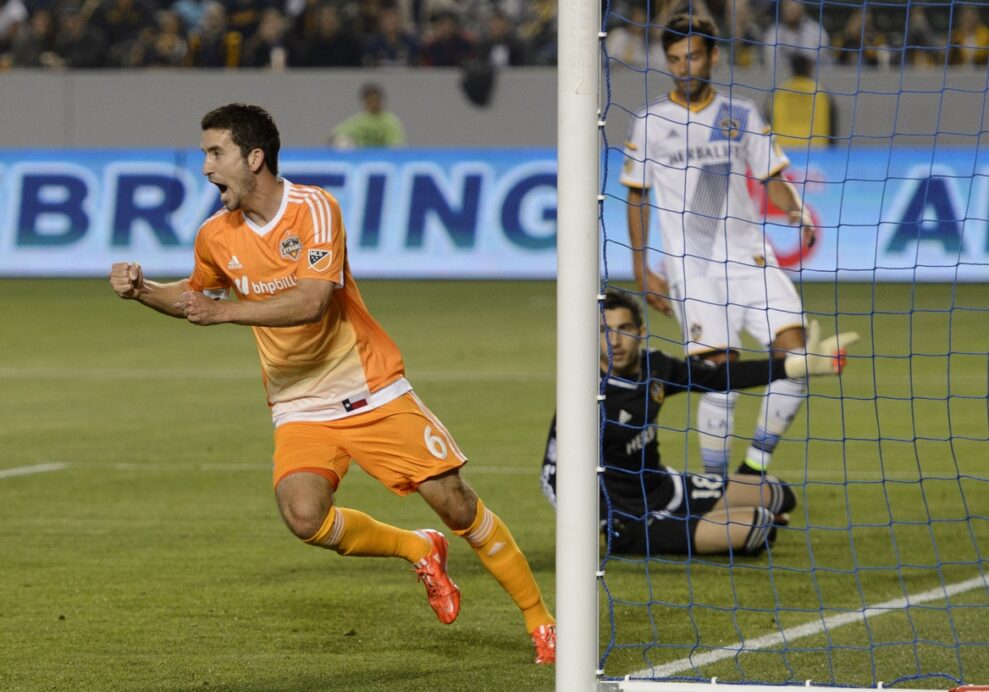 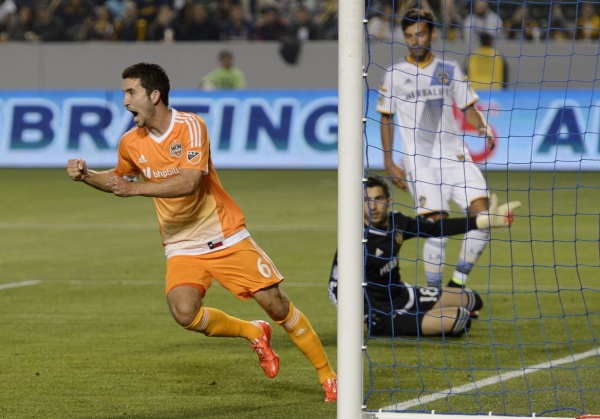 CARSON, Calif. – The Houston Dynamo gave the defending champion LA Galaxy all they could handle on a balmy Saturday night, and earned a hard-fought 1-1 draw before an announced crowd of 19, 087 at the Stub Hub Center in Carson.

In a weekend that saw precious little scoring in MLS, the Western Conference foes began the night with an offensive flurry, posting two goals in the first 12 minutes of the match.

Houston’s pace proved a difficult challenge for the Galaxy all night, and in particular the orange found much joy down the Galaxy flanks throughout the first half.  But it was the Dynamo trademark, the set piece, that undid an early Galaxy advantage.

Houston leveled accounts in the twelfth minute when Giles Barnes earned a corner after sprinting past both Galaxy center backs and playing the ball out off a sliding Leonardo.  Boniek Garcia looped the ensuing corner kick long, and David Horst headed back across the goal mouth, where it dropped inside the goal area onto the foot of Nathan Sturgis, who tapped it home.

“After we got the goal, they came back and scored on us on a good set piece” said Galaxy center back Omar Gonzalez in the locker room after the match. “The guy I was marking (Horst) was a big guy as well. It was a tough matchup. We’ve been working real hard on set pieces in practice all week.  I’m pretty sure we’ll be working on them again a lot more this week.”

Galaxy captain Robbie Keane opened the scoring on the night in the 3rd minute when he took possession of the ball just inside the center circle and treated the crowd to an electric run through the Houston midfield and back line, culminating with a clever poke underneath sprawling Houston goalkeeper Tyler Deric, who came well off his line to try to stop the hard charging Irishman but couldn’t get there on time.  Keane’s shot ricocheted off Deric’s undercarriage, popped up in the air, and casually bounced across the goal line as a helpless Dynamo defense looked on.

“I got the ball in a space I like, in between the lines, and I was able to keep going and keep going, and they kept dropping off,” said Keane of his early goal. “I beat the defender and managed to get my shot away.  It was a good start for us, but we couldn’t capitalize on it.”

Although Keane contributed the Galaxy’s only goal, he could have had more.  In the 47th minute he missed a wide open sitter high from just inside the area, on a ball he had ample time to set up.   It was symptomatic of the Galaxy play on the evening, ragged and less than beautiful.

“We need to get better” Keane continued. “I keep saying it will take four or five games, and we’re only three games in, but still, when you have a game like tonight, that’s there for the taking, and you get the early lead, at home, and then you give a silly goal away, you’re going to get punished. Especially against a team like that, that’s so good on set pieces.”

If it looked like the remainder of the night would provide the goal scoring fireworks the rest of the league failed to provide on the weekend, that never emerged.  The remainder of the game turned into a bruising affair, in which the Dynamo lost two players to injury – Ricardo Clark and DaMarcus Beasley – and at the end of which referee Juan Guzman felt obliged to add four minutes of extra time to each half.

The second half was all Galaxy.  The home side held possession for 70% of the second half, and fired off nine shots to Houston’s one.  But the winning goal never emerged, and it would be the Dynamo high-fiving one another as they escape Los Angeles with a well deserved point, while the Galaxy can only shake their heads at how their second half onslaught could not make up for their shaky play in the first half.

“They played well” said Galaxy head coach Bruce Arena after the match. “But to concede a goal like that, shortly after we scored, that’s not good. On the night we weren’t very good, to be honest with you.  We lost too many battles on the night.  I thought they played harder than us over 90 minutes, and I think that made the difference.”

The Dynamo will head home and host the Colorado Rapids on March 28th.  The Galaxy will travel across country to battle DC United on the same night.