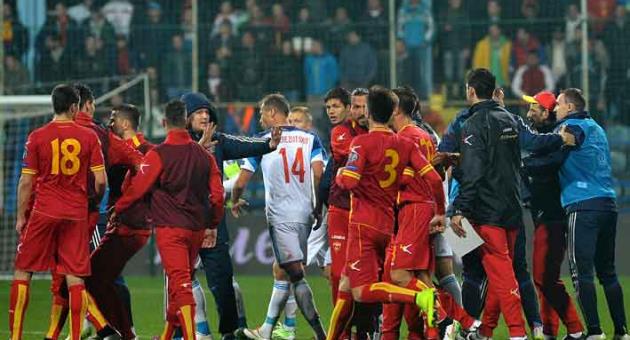 EURO 2016 Qualifying returned this weekend with some memorable action as most nations took part in their fifth game thus far.

Controversy highlighted the weekend, as Friday’s matchup between Russia and Montenegro was abandoned after numerous incidents of home fans throwing objects at the visiting Russian players, prompting a brawl in the second half.

Elsewhere, Harry Kane scored a debut goal for England, while Wales managed to blank Israel, who was previously unbeaten, 3-0, on the road courtesy of a double from Gareth Bale.

In addition, Spain edged past Ukraine in a battle for second thanks to Alvaro Morata’s debut strike for his country, while, Slovenia and Switzerland both recorded victories to reach nine points in group E, sitting second and third respectively.

Here is all that occurred in EURO qualifying this weekend:

36-year-old Eiður Guðjohnsen scored on his return to the field for Iceland before Birkir Bjarnasson’s brace ended the hopes and dreams of hosts Kazakhstan, leaving them still only with one point.

The Czech Republic was left frustrated by the Latvians, forced to settle for a draw in front of their home fans. They dominated the stats, but lady luck and decent keeping and defending from the visitors left them begging for just one more goal.

This was one of Turkey’s most-concentrated performances yet as they were leading 1-0 all the way up the the 92nd minute before Galatasaray midfielder Wesley Sneijder’s effort was headed home by Klaas-Jan Huntelaar. The hosts had more chances and possession, but the play of the night was Burak Yilmaz dragging to his right inside the area to rip home off of a defender.

Welch stars Gareth Bale and Aaron Ramsey made mince-meat of Israel, making sure to end the hosts’ perfect-start to overlap them atop the group. Israel still have a game in-hand, as they will host Belgium in a couple of days time to play their fifth game of qualifying.

Andorra was undone by the brilliance of Manchester City striker Edin Dzeko, who hit home a hat-trick to finally give Bosnia-Herzegovina their first win of qualifying.

Belgium mastered their opponent with the power of passing, dazzling and scorching in front of frame as Edin Hazard, Maraouane Fellaini (2), Christian Benteke and Michy Batshuayi each found the back of the net.

Alvaro Morata scored the only goal of the game against a resilient Ukraine side that did not want to go down without a fight. Spain now sit in second with 12 points, three behind Slovakia who did defeat them at home already in qualifying. The rematch in Spain is looking more intriguing as each round progresses.

Slovakia, in turn, stayed perfect with a victory over Luxembourg, as Adam Nemec of New York City FC opened the scoring before Vladimir Weiss and Peter Pekarik added singles of their own to keep them top of the group.

Macedonia were undone at home, dropping second-to-last in the group while their visitors, Belarus, overlapped them into fourth.

The Georgians defended with everything they had, but the world champions, Germany, made sure the three points would be theirs. Marco Reus and Thomas Muller scored in the first half to bump their nation up to 10 points to stay in second.

Scotland also jumped up to 10 points with a massive victory over Gibraltar, but are in third as the Germans did defeated them 2-1, thus holding a superior head-to-head record until they play again in Scotland.

Poland were about to about to enjoy a three-point cushion atop the group until Shane Long cancelled out Slawomir Peszko’s first-half strike in the final minutes of the game.

Captain Wayne Rooney, Danny Welbeck and Raheem Sterling made it 3-0 before the introduction of in-form forward Harry Kane, who netted the fourth on his debut for his nation. The Three Lions experimented with the 4-3-3 and it worked wonders as the Lithuanians simply could not stop the onrushing pressure.

Slovenia romped past San Marino as Borussia Dortmund’s Kevin Kampl was one of six scorers on the night as the visitors had nothing to offer.

The Swiss earned their third-straight victory to jump up to nine points as they brushed aside Estonia on a hat-trick of assists from Xherdan Shaqiri who found Fabian Schaer, Granit Xhaka and Haris Seferovic.

Kyle Lafferty scored the brace that gave his country, Northern Ireland, all three points against Finland in a 2-1 victory.

Romania surprisingly only edged past Faroe Islands due to a plethora of opportunities missed in front of frame. Claudiu Keseru decided the matter in the first half.

Hungary kept the Greeks scoreless to bump themselves up to eight points and stay in third. The visitors are stuck at two points at the bottom of the pack, clearly the most shocking factor of this group where they were definitely favored to win prior to last September.

Friday’s matchup betwen Russia and Montenegro was abandoned as Russian players stormed off the pitch after repeatedly being targeted with thrown objects by local fans. Russian keeper Igor Akinfeev was rocked in the head with a flare to start the game, causing an initial delay before the two sides played into the second half.

David Alaba scored one but missed a penalty in Austria’s easy victory on the road to top the group with 13 points, five ahead of the next-best team.

Zlatan Ibrahimovic headed home a goal-kick from the Moldovan keeper to score what is perhaps his weirdest, most-fortunate yet Zlatan-style goal before his second decided who went home with all three points.

Bulgaria proudly overcame a 1-0 deficit to jump 2-1 up on Italy, but Eder’s 84th-minute equalizer spoiled the party for the hosts.

Croatia jumped ahead of Italy into first with 13 points when they rocked Norway, 5-1 at home. The game was expected to be closer, but five different players from the hosts made sure this would be a nightmare for the Scandinavian nation.

Azerbaijan finally won a game on their fifth attempt after losing their first four with a 2-0 scoreline against Malta, who stay last with only one point.

Cristiano Ronaldo failed to score or even assist a teammate, but his presence was appreciated on the field as his Real Madrid teammate Fabio Coentrao assisted Ricardo Carvalho before scoring what would turn out to be the match-winner later on in the second half. This arrived just two minutes after Chelsea’s Nemanja Matic scored a sensational bicycle kick to tie it all up.

The Albanians were down 1-0 but the hosts’ resilience in the final 13 minutes provided just enough to complete the comeback and keep the three points safely at home.