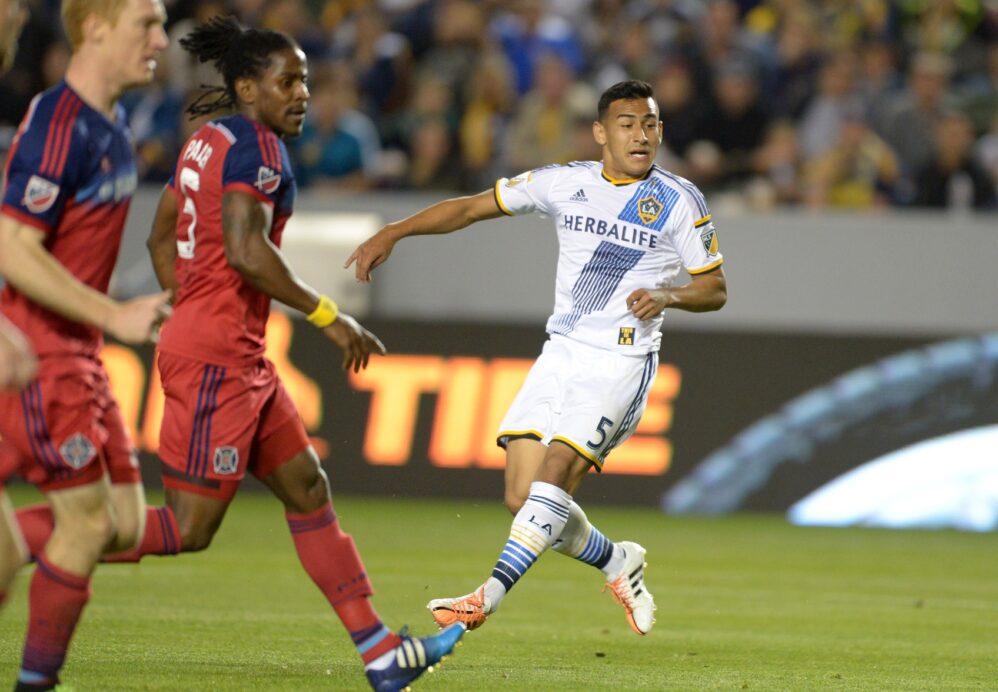 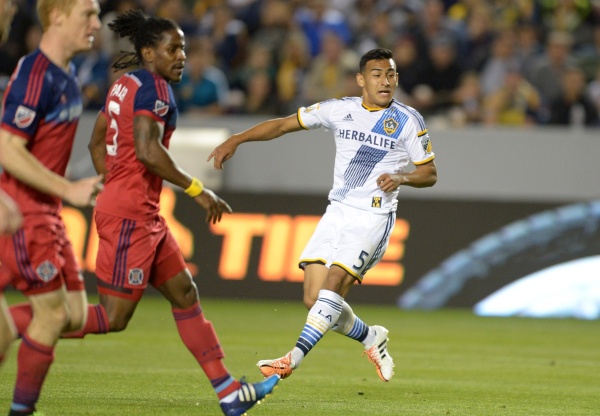 CARSON, Calif. – The LA Galaxy raised their fifth MLS Championship banner on Friday night, and then notched their first three points of the season, knocking off a lackluster Chicago Fire, 2-0, before a raucous sold out crowd of 27,000 on a balmy night at the Stub Hub Center.

The Galaxy struck first in the 65th minute when Stefan Ishizaki fired a hard curling cross that flummoxed the Chicago centerbacks. The ball was mis-hit by Jeff Larentowicz and deflected off Lovel Palmer before dropping to the foot of hard-charging Jose Villarreal. The 22-year-old, who had struggled with his passing at times during the evening, did not miss this time, beating Fire goalkeeper Sean Johnson with a sharp left-footed blast far post low to give the Galaxy all the advantage they would need on the evening.

“It feels good,” said a low-key Villarreal after the match. “The defenders had some miscommunication, and they left it, like a peach, as they say, it was perfect for me, and I just had to slap it in.”

“He obviously played well, got the winning goal, really good game,” said Galaxy head coach Bruce Arena when asked about Villarreal’s performance. “He’s a good player.  He dedicates himself to being a good professional.”

Robbie Keane doubled the Galaxy lead in the 81st minute when he pulled down a headed back pass from Baggio Husidic, off a long ball from Omar Gonzalez, and slammed it into the back of the net past a diving Johnson.

Despite the ample pageantry, the opening match of the 2015 MLS season was not always pretty. Chicago struggled to find any rhythm all night, and even the Galaxy looked ragged at times, failing to connect passes often early in the match.

The Galaxy subbed on several veterans beginning at the hour mark, and the presence of AJ De La Garza, Husidic, and Alan Gordon seemed to tighten up the Galaxy play. The final fifteen minutes of the match was an all out assault on the Chicago net, and the Fire were forced to resort to physical play to contain the league champions as glimpses of their MLS Cup form emerged.

While the Galaxy attack wasn’t always sharp, the LA back-line picked up right where it left off last season, when they were the stingiest defense in the MLS. The night’s clean sheet came despite a surprise start from backup keeper Brian Rowe, who faced few challenges from the ineffective Fire attack.

“The defense did a great job tonight,” said Rowe. “Always dropping back, helping out.  It makes my job a lot easier.”

If any player rose to the occasion, it was Stefan Ishizaki. Now in his second year in MLS, the former Swedish international looked exceptionally comfortable, and at times even daring, pressing higher into the Galaxy attack than he has in the past.  The Galaxy fired off 29 crosses in the run of play, and seventeen of those crosses came from the foot of Ishizaki. He earned the assist on the game-winning goal, and appears poised to take a much more prominent role in the Galaxy offense in 2015.

“A year ago I came in not as fit as I wanted to be” said Ishizaki after the match. “This year I’ve felt great all preseason, and my fitness level is way higher than it was last year. I feel a lot better, a lot more comfortable. I think this season I can make a much bigger impact.”

The Fire rarely threatened. Their best opportunity came in the 57th minute when Quincy Amarikwa slipped in momentarily behind the Galaxy defense and took a straight run at Rowe. Robbie Rogers tracked Amarikwa down and locked up with him and finally poked the ball away. Amarikwa went down inside the penalty area, but referee Jair Marrufo waved it off.  The Chicago bench erupted in outrage, but Amarikwa did not protest the call.

The new-look Fire will still have much work to do to if they hope to improve on their tepid performance of last season and reach the MLS playoffs this year. The Fire will host the Vancouver Whitecaps in their home opener at Toyota Park on Saturday, March 14.

The Galaxy will take the three points, and the momentary lead in the Western Conference, to Portland on Sunday, March 15, where they will face the Timbers.