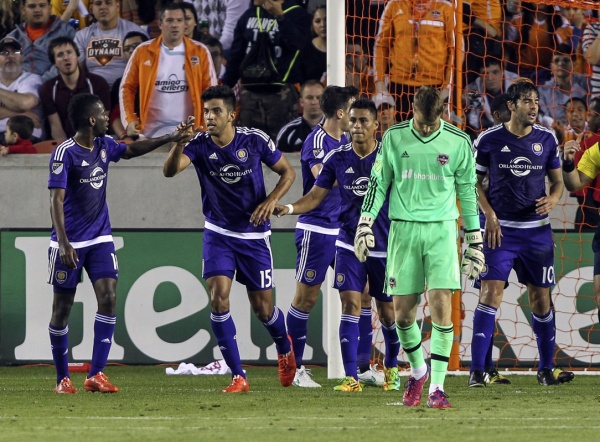 SANFORD, Fla. — After starting their Major League Soccer journey on a two-game unbeaten streak, Orlando City head coach Adrian Heath isn’t worried about where the goals are coming from.

“It’s funny I had somebody say to me the other day that we haven’t scored, it was an own goal, a deflection,” Heath told reporters. “I hope that continues and we keep winning games with golden goals and deflections cause I don’t care where they come from.”

OCSC earned their first MLS victory last Friday after defeating Houston Dynamo at BBVA Compass Stadium, courtesy of an own goal by Tyler Deric after Pedro Ribeiro forced the goalkeeper to blunder a clearance.

Before that, Brazilian star Kaka scored the game-tying goal against New York City FC after his free-kick goal deflected of Jeb Brovsky during the dying minutes of the club’s first MLS match at the Citrus Bowl. With week three having Orlando City welcome the Vancouver Whitecaps on Saturday, Heath called for calm and insisted the goals will come from his forwards.

“I think our record over the last four years, we’ve scored more goals than anybody in American [soccer],”  added Heath. “I don’t worry about that. The goals will come, I’m fully confident we have the necessary pieces to do that.”

Here are some more notes regarding Orlando City:

BACK LINE FINDING ITS FORM DESPITE MISSING VETERAN COLLIN

Coming into last Friday’s game at Houston, many questioned how Orlando City’s back line will perform without the services of MLS veteran Aurelien Collin.

The answer was clear that day and even showcased a shutout for Donovan Ricketts without having to make a single save.

“The fact that the team shaped defensively has looked very good,” said Heath. “At times a terrific shape, out of possession, and made it very difficult for them against a team that’s very good at home. So the fact that Donovan [Ricketts] has been nearly redundant for two games, we’re pleased.”

While the back line hasn’t found its exact identity heading into Saturday’s game, Rafael Ramos has solidified the right back position while Brek Shea has began to accept the left back role. Collin has been seen by Heath as the starting center back, meanwhile Seb Hines and Sean St. Ledger are still competing for that last center back role.

Orlando City’s injury list features a range of attacking options for the Lions and according to Heath, he isn’t risking rushing anyone back from injury.

Carlos Rivas (hamstring), Martin Paterson (hamstring) and Cristian Higuita (groin) did not train with Orlando City on Monday, but Heath told reporters that Paterson, who has yet to make his MLS debut because of injuries, has been progressing and could be ready to train later this week ahead of Saturday’s game vs. Vancouver.

“[Paterson] is making good progress, it’s just the case of waiting and seeing,” said Heath. “With people like him and Carlos, who are quick and want to run in behind, hamstrings are very dangerous things and we have to bare on the side of caution rather than risking it. We are not at that stage where we need to risk anything yet.”

After announcing a local television deal with WOFL FOX 35 in December 2014, Orlando City announced on Monday they have agreed with FOX Sports Florida and Sun Sports to a multi-year deal to provide statewide broadcast for Orlando City’s regional televised matches.

“Our fans across the state will now be able to follow their favorite team all season long thanks to this outstanding partnership,” said club president Phil Rawlins in a statement. “As with our great partners at FOX 35, we look forward to working with FOX Sports Florida to deliver a first class broadcast for all our fans across the Sunshine State.”

The first game of the new televised deal will happen on Saturday when Orlando City welcomes the Whitecaps to the Citrus Bowl for a 7:30 p.m. kick off. As part of the deal, all Saturday evening games will re-air on Sunday mornings at 9 a.m. ET.

What do you make of Orlando City’s forwards not scoring goals yet? How well do you think the back line will perform heading deep into the season? Which injured players worries you the most?