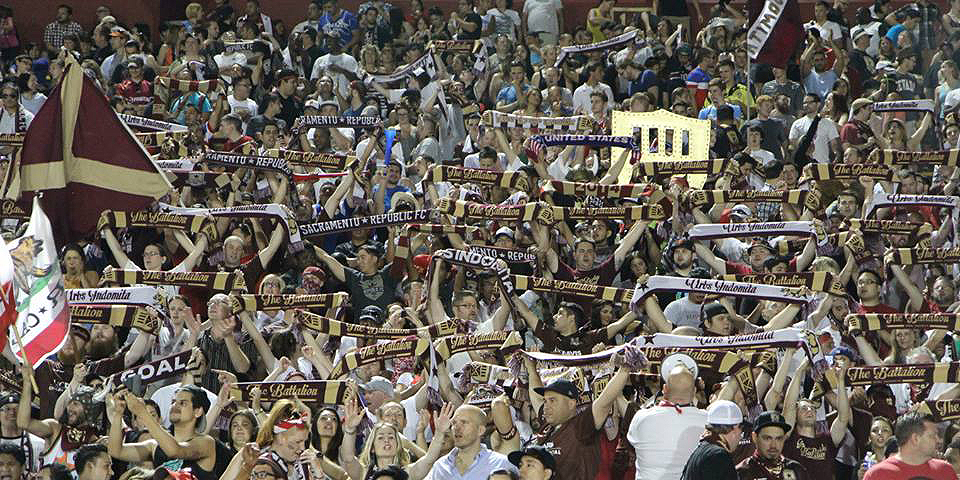 SACRAMENTO, Calif. — The buzz around the team in this city is palpable.

With year-round spring- and summer-like conditions and palm trees, it has felt as if the soccer season never left. Since Republic FC capped off its inaugural season with a championship in September, enthusiasm hasn’t stopped growing. Republic FC’s preseason is almost over and games have been selling out days in advance all the way through.

Even all the way in cold and cloudy New York City, it’s been difficult for the executives of Major League Soccer not to notice. The league is still deciding where it should expand next and the spotlight is firmly on Sacramento.

“The local momentum and relevance Sacramento has built in a short period is more than impressive,” said Portland Timbers owner Merritt Paulson, who took his club from MLS expansion side to one of the league’s success stories. “They are ambitious and doing all the right things.”

Even with rumors swirling about Minneapolis being the leading candidate to be the next city to be awarded MLS expansion, Sacramento continues to be one of the most impressive success stories among the markets bidding for a place in MLS.

So how did a market that didn’t even have a pro soccer team two years ago, let alone a place in the MLS expansion discussion, make such a dramatic transformation? Here is a closer look at how the one-time expansion underdogs have captured the imagination of not only Northern California soccer fans, but MLS as well:

A year ago, Republic FC had never played a match and the city had no history of professional soccer. To the outsider, Sacramento exists in the shadow of bigger, flashier markets like San Francisco.

But when it came down to the finer details, the ones that become apparent when looking closely, Sacramento makes a case too compelling to ignore.

With Las Vegas now out of the running, Sacramento has to compete against Minneapolis, Miami and San Antonio for two remaining MLS slots in this round of expansion. Multiple reports emerged last week identifying Minnesota as one of the teams that will fill one of the two remaining expansions slots, and a final decision from MLS is rapidly approaching. With nothing finalized just yet, it seems to be a race for whoever can check the league’s boxes by then.

“Right now, we’ve done absolutely everything they’ve asked for,” said Sacramento Republic FC president Warren Smith, before Vegas was formally rejected and rumors broke that Minnesota is in line for an expansion slot.

“We’re going to continue to make it hard for them to not choose Sacramento,” Smith added, noting the league has been coy about his club’s chances. “What they have shared is that no city has been as comprehensive and as diligent in building their case as Sacramento has.”

The league has four main areas it looks at when considering prospective expansion franchises, according to MLS Executive Vice President Dan Courtemanche: A financially viable local ownership group, a stadium plan with club control, a market with prospective sponsors and broadcast partners, and strong fan support for area sporting events and broadcasts.

The last one on the list came the quickest for Sacramento. In the club’s inaugural match in what was then USL Pro, Republic FC smashed the league’s single-match attendance record, drawing more than 20,000 fans. The club went on to set a new single-season attendance record in just nine matches, with another six left to host.

Sacramento has continued to deliver on the league’s criteria since then, striking a handshake agreement in September to acquire land for a new soccer-specific stadium blocks from downtown. The deal is preliminary, but it’s hard to discount in light of the opposition David Beckham has faced trying to build a stadium in Miami.

Republic FC outdid itself again and shot ahead in the MLS expansion race with a blockbuster announcement: The investing partners behind the San Francisco 49ers and the Sacramento Kings joined as investors to back the Republic’s MLS expansion bid.

MLS is looking for an expansion team “located in an appropriate geographic location.” For Sacramento, location is a mixed bag and could be Republic FC’s biggest weakness. The west coast has no shortage of teams and another one in California won’t expand the league’s footprint.

“I’m not sure this is something MLS initially understood — if you combine our (metropolitan statistical area) with the San Francisco Bay Area, we’re the fourth largest market in the country,” Smith said. “It deserves two franchises in Major League Soccer. We think it honestly helps the league and the Earthquakes.”

Smith concedes that the Earthquakes seem “cautious” about the possibility of nearby Sacramento making an entrance into MLS. But he said Republic FC is working to make the Earthquakes comfortable with it.

Long term, it could be a boost for both clubs, he said. There’s certainly room for a new rivalry in MLS.

February’s sold-out match in Sacramento against the Earthquakes was a preseason friendly that felt like anything but, with players shoving on the pitch and dueling supporters groups trying to out-yell each another in the stands. Eventually the visiting 1906 Ultras group was escorted out of the stadium when they apparently wouldn’t agree to stop chanting profanities.

The start of a rivalry is there. Perhaps, Smith wonders, it could produce a derby like the one in Portland and Seattle.

If Smith had looked a little more closely at what he had last time he co-owned a soccer team, he may already be an MLS club owner.

Back in 2004, he was part of a group that bought the Portland Beavers, a struggling minor league baseball team. To sweeten the deal, the package included the Portland Timbers, then in third-division USL, where Republic FC plays now.

While Smith oversaw the Timbers, his group took attendance from a paltry 2,000 average per match to more than 7,000, he said. But they didn’t really know where the team could go from there.

They sold it to a new sports investor named Merritt Paulson. He steered the club into MLS expansion and turned the Timbers into one of the most successful clubs in MLS history, selling out every home league match since 2011. The Timbers are on 70 consecutive sellouts and counting.

“We learned a lot through that process,” Smith said. “We learned, No. 1, that Merritt wasn’t crazy — he was actually pretty darn smart and we were just not wise enough to look at the opportunity in MLS. And, No. 2, Portland is very similar to Sacramento.”

Sacramento and Portland certainly aren’t exact copies of each other, but look closely and the similarities are there.

Before MLS entered the picture, both were cities with a single sports team, a successful NBA team in each. Sitting in top-25 media markets, both are large, populated areas that are often overshadowed by even bigger ones in Seattle and San Francisco respectively.

Perhaps most importantly, both are cities that didn’t hesitate to get excited about soccer in a big way, even at the lower division levels.

Smith turned to Paulson and the Timbers early in the process for guidance — it helped that some of the staff that worked under Smith’s tenure remain at the Timbers still. Although Paulson declined to speculate on Republic FC’s chances of breaking into MLS for SBI, he hinted the club is following the MLS expansion playbook well.

With inspiration from Portland — plus some from Orlando City, which had a similar quick rise through USL and made its MLS debut this year — Smith and his team set an ambitious five-year plan. In the first year, which was last year: Build a brand. By the third year: Acquire MLS rights. By the fifth year: Secure a new downtown stadium.

“We’re still right on target,” Smith said. “It all depends on MLS. The only thing that might happen is they award it, potentially, to us earlier. It all kind of depends on what happens this year.”

Sacramento’s expansion bid is running strong, but so is the competition.

San Antonio remains a longshot — even as the Mexican Football Federation recently endorsed MLS expansion into Texas’ second-largest city — but there are two other compelling options in Miami and Minnesota. The bids for Miami and Minnesota aren’t perfect, however, and both face obstacles that could end up benefiting Sacramento.

MLS wants David Beckham to put a team in Miami. But do Miami’s city officials want that, too? The answer has been a muddy one since February 2014, when the league announced Beckham would be granted a franchise once he secured a stadium in the city. These days, the bid that was long considered the surest now looks the most in doubt.

Miami is a top U.S. market, and Beckham, one of the biggest names in soccer, is backed by deep pockets. The only thing that may be missing from Beckham’s bid is a secured stadium site – but it is a very big thing. MLS seems to desperately want a team in Miami, but Garber has been firm that Miami won’t get a team without a premier downtown location for a stadium. As time drags on and Beckham moves onto his second, third and fourth choice locations, it looks like it may not work out for this round of expansion.

Despite Beckham’s group insisting things are on track, the project has been stuck at a standstill, turning it into a question mark after initially being considered a lock — and that has left the MLS expansion race wide open for Sacramento.

Republic FC will need that opening Miami has ostensibly created. Last week, reports emerged that Minnesota would be one of the two teams added in this current round of expansion. If that does end up happening, it’s hardly a surprise. MLS Commissioner Don Garber has called Minneapolis “a big priority” for MLS and has vowed to fix the league’s “lack of coverage in the Midwest” soon.

But Garber has also raised concerns about how Minneapolis would mesh with the open-air venues and cold-weather schedule of MLS. “It was minus zero in Minneapolis yesterday — imagine what it would be like in February,” Garber said in December when talking about expansion options. At the time, that looked good for Sacramento, which is sunny and warm for most of the year.

The decision isn’t final yet, however, and the league expects an announcement as soon as April. If MLS history has proven anything, it’s that nothing is a foregone conclusion. Either way, Sacramento will keep trying for an MLS expansion team, Smith said, no matter what happens in this expansion round that will cap the league at 24 teams through 2020.

“They have shared that we are definitely a part of conversation,” Smith said of MLS. “There are people in the league that have said it’s not a matter of if, it’s a matter of when.”

It all comes down to Miami and Minnesota, two teams long considered top contenders. Despite its later start, Sacramento has surged from pro soccer anonymity to the verge of a place in MLS and that momentum has the city looking like it could pull off what would have been deemed unthinkable even just a year or two ago.

“The one thing that’s changed in Sacramento is, it wasn’t long ago, maybe three years ago, when everything was impossible,” Smith said. “Now, there’s this feeling of, everything is possible. No longer are ideas being dismissed. Now people are saying, ‘That’s fantastic. How can I help?’”

“It takes a village, it takes a community to be awarded these franchises and we’ll do our work, but we can’t do it without the fans. To have them as excited as they are, I couldn’t be happier.”