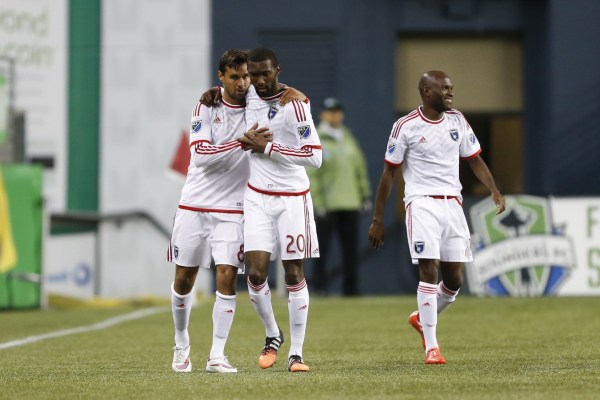 Stationed at the bottom of the rankings last week, few believed that the San Jose Earthquakes could pose much of a threat to the top-ranked Seattle Sounders. That was until they went out and did it.

The Earthquakes pulled off the upset of the week by defeating the Sounders, 3-2, despite going down a man early in the second half.

In general, it was a rough week for last week’s top rated teams, as the LA Galaxy settled for a draw with the Portland Timbers, while Toronto FC were dominated by the Columbus Crew.

NYCFC also picked up a victory over a playoff contender in the New England Revolution, as David Villa led the expansion side to the club’s first win. Orlando City also joined NYCFC with their inaugural victory by defeating the Houston Dynamo last Friday night.

Here are the SBI MLS Power Rankings for Week 1:

OUTLOOK– The Galaxy were just moments away from departing Saturday’s matchup with a loss, but Alan Gordon’s late equalizer saved the day for the reigning champions to earn a precious, albeit slightly fortunate, point.

OUTLOOK–  After putting on an impressive attacking display in their opening match, the Sounders failed to take advantage of an early goal and a man advantage in a loss to the Earthquakes. Questions now arise regarding the defense after being exploited by Chris Wondolowski and Innocent Emeghara.

OUTLOOK– After settling for a defeat in the team’s opening game, the Crew roared back Saturday by dominating Toronto FC. With the first win in the back pocket, the Crew now have a week of rest to relax and reflect on Saturday’s result.

THIS WEEK: At Philadelphia Union on Friday

OUTLOOK– Blas Perez once again proved to be the difference for FC Dallas, as the striker now sits tied with Clint Dempsey for the league lead in goals. Riding an in-form Perez, FC Dallas look to continue their perfect start on the road against the Union.

THIS WEEK: At New York Red Bulls on Sunday

OUTLOOK– Head coach Ben Olsen could take plenty of positives from the season-opening performance against the Montreal Impact, but there were still plenty of kinks to work out on the attacking end.Coming off of a bye week, D.C. United has had two weeks to prepare for the team’s trip to Red Bull Arena to take on their fiercest rivals.

OUTLOOK– Some teams respond well to the adversity that comes with going down a man, but if last week’s performance was any indicator, Toronto FC is not one of those teams. TFC were torn apart by the Crew after going down to 10 men, ensuring a sour taste in the team’s mouth heading into a bye.

OUTLOOK– Through the season’s opening two games, the Revs remain goalless, signaling a worrying start for the reigning Eastern Conference champions. A healthy Lee Nguyen and co. now have the added motivation of the club’s return to the friendly confines of Gillette Stadium for the club’s home opener.

OUTLOOK– It was far from the prettiest goal ever scored, but Orlando City will be glad to escape Houston with a 1-0 victory and the club’s first MLS win. Orlando City have proven to be the dominant side in each of their two contests, but the Lions are now tasked with taking on a Whitecaps side coming off of an impressive, albeit low-scoring, win of their own.

OUTLOOK– NYCFC put together a spectacular debut at Yankee Stadium by knocking off the New England Revolution on the back of David Villa. Despite Villa’s play, it is NYCFC’s defensive unit that have been most impressive, as the club is a deflected Kaka free kick from back-to-back clean sheets.

THIS WEEK: vs. D.C. United on Sunday

OUTLOOK– Last week’s bye was probably a welcome one for the Red Bulls, who are still in the process of acclimating a starting lineup full of new faces. An extra week of training is sure to help, but now it’s right into the fire with a matchup with rivals D.C. United.

OUTLOOK– After being held scoreless in their opening matchup, Real Salt Lake put three on the board against the Union Saturday, but were forced to settle for the same result of a draw. With two vastly different performances on record this season, RSL now have a bye to get their attack and defense on the same page.

OUTLOOK– The Timbers have settled for a pair of draws thus far, although it’s hard not to think that Caleb Porter’s side deserved to have won both contests. Lacking the ability to truly take control of a game, the Timbers will need to do better in putting teams away going forward.

THIS WEEK: At Portland Timbers on Saturday

OUTLOOK– Sporting KC have just one point through the team’s opening two games after being outclassed by Blas Perez and FC Dallas. The return of Matt Besler will be a major boost, though, as the team heads into a hostile Providence Park to take on the Timbers.

OUTLOOK– The Whitecaps recovered well from Week One’s loss to Toronto FC, as Octavio Rivero scored again to seal a late 1-0 victory over the Fire. Rivero appears to be living up to the hype, as the forward has given the Whitecaps a legitimate goalscoring threat to lead the attacking line.

THIS WEEK: vs. FC Dallas on Friday

OUTLOOK– The Philadelphia Union have settled for draws in consecutive weeks, but were just moments away from a victory before conceding a penalty. Much like the end of last season, the Union are struggling to close out games, something they will need to improve upon from here on out.

THIS WEEK: vs. Chicago Fire on Sunday

OUTLOOK– The Earthquakes put together a spectacular performance to knock off the reigning Supporters’ Shield winners and could easily be on four points heading into this week’s matchup with an old friend in Frank Yallop.

OUTLOOK– The Dynamo hung around with Orlando City on Friday, but a calamitous goal saw Owen Coyle’s side drop all three points. Despite the missteps in the loss, Tyler Deric has proven to be a capable keeper for the Dynamo through the opening weeks, highlighted by his save Friday on a Kaka free kick.

OUTLOOK– The Impact face a major debate this week, as the club heads into CONCACAF Champions League action on Wednesday. Having lost the team’s opening game, the Impact will need to prioritize either the continental competition or this weekend’s matchup with the struggling New England Revolution.

OUTLOOK– The defense was the star of the show in the Rapids’ season opener, but now the team has questions on the attacking end. With Deshorn Brown on his way out, the attacking responsibility now falls on Gabriel Torres and rookie Dominique Badji.

THIS WEEK: at San Jose Earthquakes

OUTLOOK– The Fire have failed to it their stride, as the team’s series of new faces really haven’t made much of an impact to this point. Frank Yallop will hope that changes with the introduction of David Accam, who could give the Fire a legitimate threat up top.