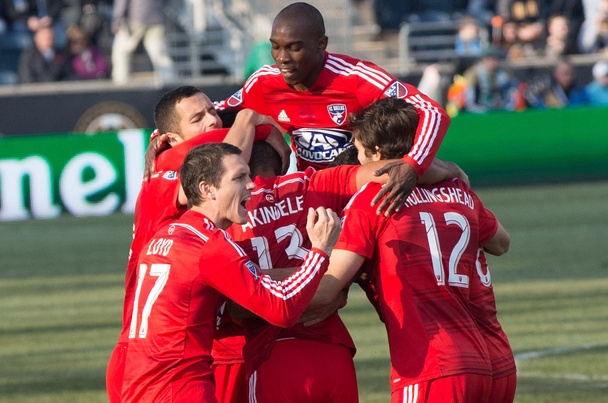 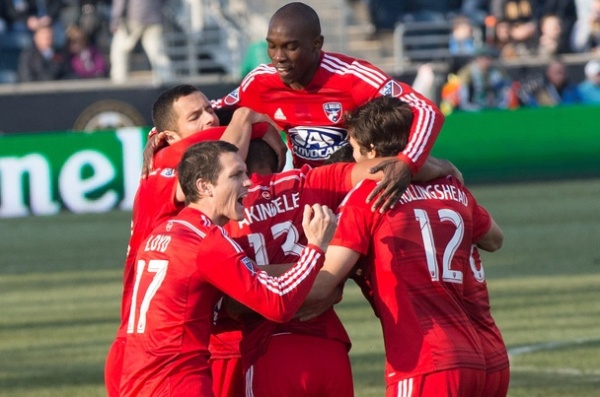 Entering the season perceived to be just outside the league’s upper echelon, FC Dallas continues to make its case to be included among the league’s elite.

FC Dallas has picked up three wins in as many games, most recently besting the Philadelphia Union 2-0. With the victory, FC Dallas remains the only team in the league on maximum points.

Things haven’t been as smooth for the defending champion LA Galaxy, which was once again forced to settle for a draw.

Elsewhere, the Earthquakes picked up a second straight victory to open up Avaya Stadium in style while ensuring a move up the rankings.

Here are the SBI MLS Power Rankings for Week 3:

THIS WEEK: at D.C. United on on Saturday

OUTLOOK– Once again, the LA Galaxy were forced to settle for a draw in a game they could have won, but the reigning champions have yet to lose a game through the opening three weeks. Jose Villareal has stepped up admirably following the departure of Landon Donovan, filling the void early with a goal and two assists.

THIS WEEK: At FC Dallas on Saturday

OUTLOOK–  Following a frustrating defeat to the San Jose Earthquakes, the Sounders are coming off a bye in league play. The club does, however, host Club Tijuana in a Tuesday night friendly to prep for CONCACAF Champions League. Waiting this weekend is the league’s hottest team, FC Dallas, which should provide a good barometer of where both teams stand in the early season.

OUTLOOK– FC Dallas has thrived early, establishing itself as the league’s most dominant side through three weeks. The club has been spectacular on both the attacking and defensive ends, having scored six goals while only conceding one. Week 4 presents a major test, though, in the form of the reigning Supporters’ Shield winners.

OUTLOOK– Tabbed as early season title contenders, the Columbus Crew lived up to the hype by dismantling a 10-man Toronto FC side last time out. With an extra week between action, the Crew will need to continue the momentum by replicating that performance, rather than a stagnant display from the team’s 1-0 loss to the Houston Dynamo in the season opener.

OUTLOOK– Toronto FC was completely overwhelmed after going down a man against the Columbus Crew, and never looked truly in the game for a majority of the contest. With a week to work in some of the new faces, TFC would hope to put together a more cohesive performance against RSL.

OUTLOOK– Coming off a tumultuous offseason to say the least, the Red Bulls did plenty to ease fan concerns with a dominant performance against a fierce rival. Despite being forced into playing a makeshift defense, the Red Bulls were dominant, with the club’s new-look midfield trio proving to be a major handful.

OUTLOOK– Saturday’s performance against the Rapids was more than a little underwhelming, as NYCFC was on the back foot against a Rapids side that wasn’t expected to present much of a challenge. NYCFC struggled to attack with any consistency, with David Villa providing the lone real chance of the afternoon.

OUTLOOK– In the eyes of Ben Olsen, Sunday’s performance was unacceptable, as D.C. United was completely outclassed by the rival Red Bulls. Overmatched in the midfield, D.C. struggled to get in any sort of rhythm in what turned out to be a demoralizing early season loss.

OUTLOOK– Last season’s Whitecaps lacked only an attacking threat, and it now appears that the club has one in Octavio Rivero. Having provided a goal in each of the team’s games, including Saturday’s late winner, Rivero has the potential to elevate the Whitecaps into the upper echelon of contenders.

OUTLOOK–  Three games, zero goals. The Revs are struggling and lack any creative spark. While Week 4 is no time to panic, Jermaine Jones’ absence as he recovers from sports hernia surgery has been mighty concerning, as the U.S. Men’s National Team midfielder’s return can’t come soon enough for a Revs side that lacks any bite.

OUTLOOK– Saturday’s performance was expected from an expansion side, as Orlando looked strong, but failed to make any true mark. Growing pains are expected, and they’ll come, but Orlando City still has to prove that they have a viable scoring option.

OUTLOOK– It’s been three points from three games for the Timbers, who have struggled to really assert themselves as dominant yet this season. Part of the blame should lie on the attacking end, as the Timbers have scored just twice in three matches, a recipe for dropped points.

THIS WEEK: vs.Toronto FC on Sunday

OUTLOOK– After two vastly different performances, Real Salt Lake needs to demonstrate that it can combine for success on both the attacking and defensive end. A match with Toronto FC looms, with both sides needing to show depth due to national team commitments.

THIS WEEK: at New England Revolution on Sunday

OUTLOOK– Following the team’s upset victory over the Seattle Sounders, it would have been natural for the Earthquakes to have a bit of a hangover heading into the opening of Avaya Stadium. It never came, as the Earthquakes looked strong once again in a defeat of the lowly Fire.

THIS WEEK: At New York City FC on Saturday

OUTLOOK– It’s been a series of mediocre to lackluster performances from Sporting KC. With just two goals from three games, Sporting KC has struggled to get into a flow, but is fortunate to see Matt Besler and Graham Zusi untouched by national team call ups.

OUTLOOK– After narrowly snagging draws in the team’s opening pair of games, luck finally ran out for the Union against the buzz saw that is the FC Dallas attack. Jim Curtin’s side impressed on the attacking end in the club’s second game, but consistency will need to be the name of the game going forward, starting with Sunday’s meeting with the Fire

OUTLOOK– After struggling in a defeat to Orlando City, the Dynamo did well to snag a point against an always-dangerous LA Galaxy side. Head coach Owen Coyle has his men playing tight, composed soccer, as the Dynamo have never looked truly outmatched yet this season.

OUTLOOK– The Impact’s CONCACAF Champions League form has yet to carry over into MLS play, with the team yet to score a goal in MLS this season. Injuries to Justin Mapp and rookie sensation Cameron Porter won’t help, as the Impact’s attack is quickly weakening.

OUTLOOK– Through two games, the Rapids have two points, based mostly off the team’s strength on the defensive end, which has produced back-to-back clean sheets. On the attacking end, things haven’t been so fruitful as the team is yet to score, but it’s pretty hard to lose if you don’t concede.

OUTLOOK– It’s been an ugly start for the Fire with three losses in as many games. Despite providing a few positive moments, the team’s new signings have yet to click, leading to the Fire being outclassed in each game to this point.