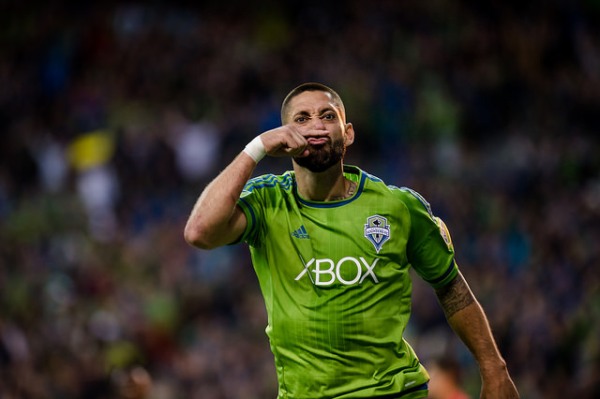 SEATTLE– It took 77 minutes and forced a packed house to sit through a somnolent first half, but the Seattle Sounders scored late in front of 41,451 at CenturyLink Field to earn a 1-0 win over the Portland Timbers on Sunday night.

No surprise it was Clint Dempsey who finally felled the Timbers.

Just moments after entering the match, Sounders midfielder Andy Rose fired from short-range at goalkeeper Adam Kwarasey, who dove to deflect the shot but failed to collect. As Kwarasey rolled toward the goal in search of the ricochet, Dempsey darted in to push the ball over the line for the 1-0 lead and his fourth goal of the season.

Dempsey has now scored in four straight matches against Portland. He also has six career goals in the rivalry, leading all players on either team since the Timbers joined MLS in 2011.

Late substitute Fanendo Adi almost equalized in the 81st minute, but his header from the center of the penalty area slapped off the crossbar. Gaston Fernandez volleyed wide right in stoppage time.

The Timbers have yet to win a regular season MLS match in Seattle. The Sounders now lead the all-time MLS series with a 6-2-4 record, outscoring Portland 22-14 in the process.

“I’m not sure what it is about them,” said Timbers midfielder Darlington Nagbe. “I know they don’t feel like it is going to be an easy game when they play us. I know they are still worried in the back of their heads when we play that we can beat them, so I don’t think it is anything too serious.”

The first half was sluggish from the start, with the Sounders (4-2-1, 13 points) continually stymied by a bunkered-in defense and more than a few errant passes.

“We were a little bit surprised at the beginning of the game because these games are usually more high-tempo type games,” said Sounders head coach Sigi Schmid, “and they were just very content with pushing the ball around at back and not really going anywhere with it. Sort of taking the air out of the ball, trying to slow things down.”

Obafemi Martins created the first chance of the match in the ninth minute, stepping into a loose ball at the left corner of the 6-yard box and scooting a shot just past the far post. It ended up being the only real opportunity of the half for either side.

“It was just really tight,” said Dempsey. “Any time a player got the ball in the pocket and was driving with the ball, he would either get fouled or was having to break from a tackle to try to play somebody. It was kind of a scrappy game. They made it difficult for us strikers to create chances.”

The Timbers (2-3-3, 9 points) couldn’t muster a shot until Maximilliano Urruti’s hopeful attempt from outside the box in the 36th minute.

As far as defensive performances go, the Sounders preserved the shutout despite missing center back — and reigning defensive player of the year — Chad Marshall to suspension.

After spending much of the first half on their heels, the Timbers came out more aggressively to start the second half, generating as many shots (two) in the first five minutes as they managed in the entire first half.

“I thought we created enough to score,” said Porter. “In a game like this you have to keep it tight. We’re on the road, we’re playing one of the best teams in the league, the Supporters’ Shield winners, two of the best strikers…We had to be organized, and I thought we were.”

In the 70th minute Urruti had a goal called back for offside after Darlington Nagbe chipped him behind the defense. He was later replaced by Adi, who sent a point-blank header wide left just seconds after entering the game.

“You are obviously disappointed to not come out of here with at least a tie,” said Timbers midfielder Jack Jewsbury, “and I thought we had enough chances on the road. You’re not going to get a ton of clear cut (chances) but I thought we fought and played well enough to possibly get out of here with three (points).”

Looking forward, both squads are back in action next weekend. The Timbers host the Vancouver Whitecaps (5-3-1, 16 points), while the Sounders visit Yankee Stadium for their inaugural match against New York City FC (1-4-3, 6 points).