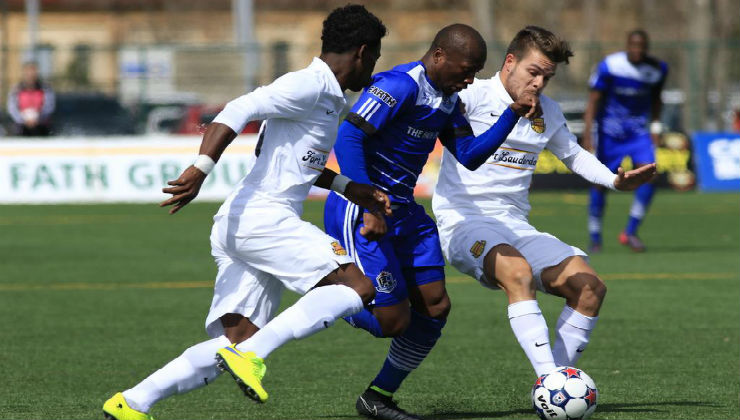 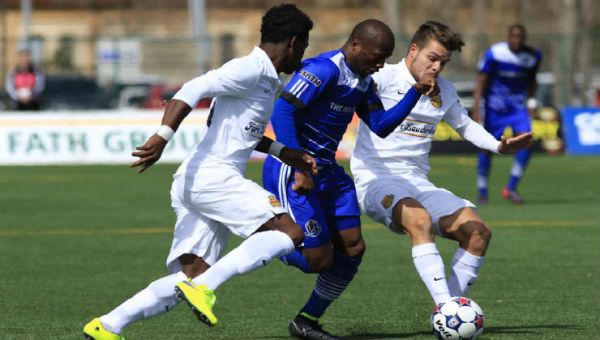 FC Edmonton’s constant bombardment in attack left the Fort Lauderdale Strikers in the dust, as the Eddies claimed a wild 3-2 win in Canada.

Sainey Nyassi is proving to be a hassle for opposing NASL defenses, as the midfielder used his speed and agility to create an easy goal early on for the Eddies, a penalty decision late in the first half and a goal of his own in the second half.

The Strikers put up a strong effort on the road, with Leo Moura causing the most anxiety for the Edmonton back line. His goal in the second half almost saw the Florida side through, but the Strikers just had no answers for the Edmonton attack on the day.

The goal-fest started in the 8th minute when Ritchie Jones, who was all over the field in the first 45 minutes, coolly passed Nyassi’s low-driven cross into the net after the speedy Gambian broke down the right and into the penalty box.

Edmonton defender Albert Watson gave the Strikers an opportunity to equalize after being called for a foul right outside of the box, but Moura’s curling effort went just wide of the goalkeeper’s left post in the 15th minute of play.

But in the 20th minute, Dani Sanchez dribbled into the box on the right, cut inside and curled his effort around Matt VanOekel for the first-half equalizer. Marlon Freitas was credited with the assist, but Sanchez did most of the work, beating his man with a fake and using his left foot to claim his first of 2015.

And the Florida waves kept coming, as forward Jose Angulo hit the crossbar yards away from goal moments later, and the chance bounced out to the good fortune of FC Edmonton. Edmonton’s Jones had two good chances to bag his brace for the afternoon toward the end of the first half, and it was Nyassi once again who gave the Strikers back line troubles in the 43rd minute, as the midfielder created space in the box and caused Daniel Navarro to foul him for a penalty.

Jonke blasted the subsequent chance to David Meves’ righthand side, but the goalkeeper guessed correctly, saving the shot and seeing the rebound chance roll wide.

Jonke almost made up for his miss in the 55th minute, but Meves came out and made himself big after Lance Laing’s dangerous cross into the box. Again, Laing found space in the 59th minute and sent in another cross, but Jones’ opportunity was stuffed by Meves, who had played well throughout the match.

The Eddies looked ready to score at any moment, causing problems for the Strikers defense all day long. However, the deadlock was broken in the 62nd minute by Fort Lauderdale midfielder Moura, who calmly finished the rebound off of VanOekel after he flubbed the slow-rolling effort by Victor “PC” Giro.

Toni Ameobi came on for Jonke late on and sparked the eager Eddies on, and it was none other than Nyassi who blasted in the second of the day for Edmonton in the 75th minute. But the Canadian side wasn’t finished there.

In the 80th minute, Laing, who was having just as good of an outing as Nyassi, sent in a wonderful cross from the left flank, and Ameobi rose high to head home the third of the afternoon for the Eddies.

With the win, FC Edmonton can enjoy the result with the next weekend off, while the Fort Lauderdale Strikers will stay in Canada and meet Ottawa Fury FC on Saturday.