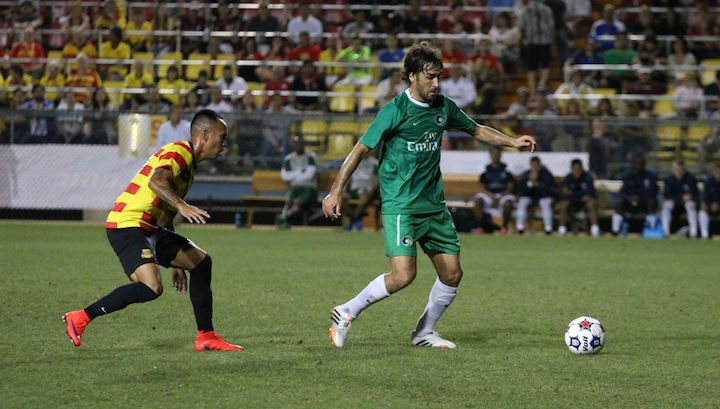 Raul’s regular season debut for the New York Cosmos was cut short this past weekend, but head coach Giovanni Savarese insists that there is nothing to fear.

Savarese said Tuesday that Raul’s injured hamstring resulted in a substitution that was merely precautionary, and that the Spanish forward is expected to travel this weekend for the team’s matchup against Indy Eleven.

“He came out of the game because he felt a little pinch,” Savarese said on a conference call. “He did an MRI this morning and it came out as something very slight and something very minimum. He’s already available to train tomorrow, so we expect him to do full training tomorrow. He’s fine.”

While there may be some temptation to rest Raul against Indy Eleven ahead of the Cosmos’ home opener next week, Savarese – who also revealed that left back Ayoze is expected to be fit as well – insists that he remains focused on the game at hand.

“First of all, I have to say that we always take it game by game,” Savarese said.  “The home opener is next week, but our main focus remains on this game in front of us, which is Indy Eleven. We are all preparing very well and Raul is going to be able to train tomorrow for the match this weekend, which is a very important match against a good team that has grown a lot from last year and we expect another battle.”

Here are some more of Tuesday’s New York Cosmos news and notes:

The Cosmos performance against the Fort Lauderdale Strikers may not have been perfect, but Savarese is plenty happy with the fight his side demonstrated in pursuit of three points.

Led by a Leo Fernandes finish, the Cosmos topped the Strikers, 1-0, in a game in which New York was surely not at its best. However, after seeing numerous games of that nature slip from the Cosmos’ grasp last season, Savarese is pleased with his side’s mental toughness in pursuit of a hard-earned victory.

“The team showed a lot of character, a lot of personality,” Savarese said. “At no moment in the game did we feel that we were losing control of the match, even though they were very dangerous in the first half (and) created some progress because I think their pressure pushed us into some things that I think could have done a little bit better. There were some things that we need to improve, but I think the character of (goalkeeper Jimmy) Maurer and the back four defenders is a factor of why they couldn’t score.”

Cosmos defenders Hunter Freeman and Samuel Caceres have yet to fully join the team for different reasons, but Savarese said that he expects the duo to be in training and challenging for playing time in the near future.

Freeman, who has made 40 appearances for the Cosmos since 2014, has been sidelined with Plantar fasciitis, and Savarese and his staff have been sure to be patient with the defender. Savarese does expect Freeman back soon, but the club will take its time in getting him back into the fold.

“Hunter Freeman is evolving. He’s getting better,” Savarese said. “He’s not there yet, and we’re probably looking at another two weeks. He needs to start doing full practices. His injury is a tricky one, so we have to take it with a lot of respect. There are a lot of exercises that are getting him closer, so at the moment we are very content with his progress and we hope to have him on the field soon.

Caceres, meanwhile, has yet to join the team as he awaits a visa. Savarese said that the situation is cleared up now and that he expects the Paraguayan defender in with the team as soon as this weekend.

“He’s now gotten approved with the visa,” Savarese said. “He’s just finalizing a couple of little things in Argentina and now soon he will travel to New York, probably this weekend. He’ll be with the team and he will be available to play as soon as he’s ready to get on the field.

“One of the great things about this year, I’ve mentioned many times, is that even though we are now shorter with the roster, we feel that there are more battles in each position. For a player to come in, they need to get to speed in which we feel that they could play. We’ll assess him when he comes, but he’ll be here probably this weekend.”

Savarese and the Cosmos are never shy with their intentions of acquiring the best players possible, but that doesn’t mean that the club is willing to go into the transfer market without a set plan.

There are still spots to be filled on the Cosmos roster, and while Savarese admitted that some of them may be filled with players that are expected to be on Cosmos B, the club also remains in pursuit of finding the right player at the right time.

“We find where we are right now is that we’re still looking,” Savarese said. “We try, but we’re not being desperate or aggressive to do that. We have to find the right players.

“We’re moving a lot. We’re still talking to a few names, but like I mentioned before as well, we’re not in a rush with anyone. Things need to be done correctly and hopefully soon we can announce some new players, but we are very content with the group that we have and as soon as we are ready to make an announcement, we’ll make it sooner than later.”