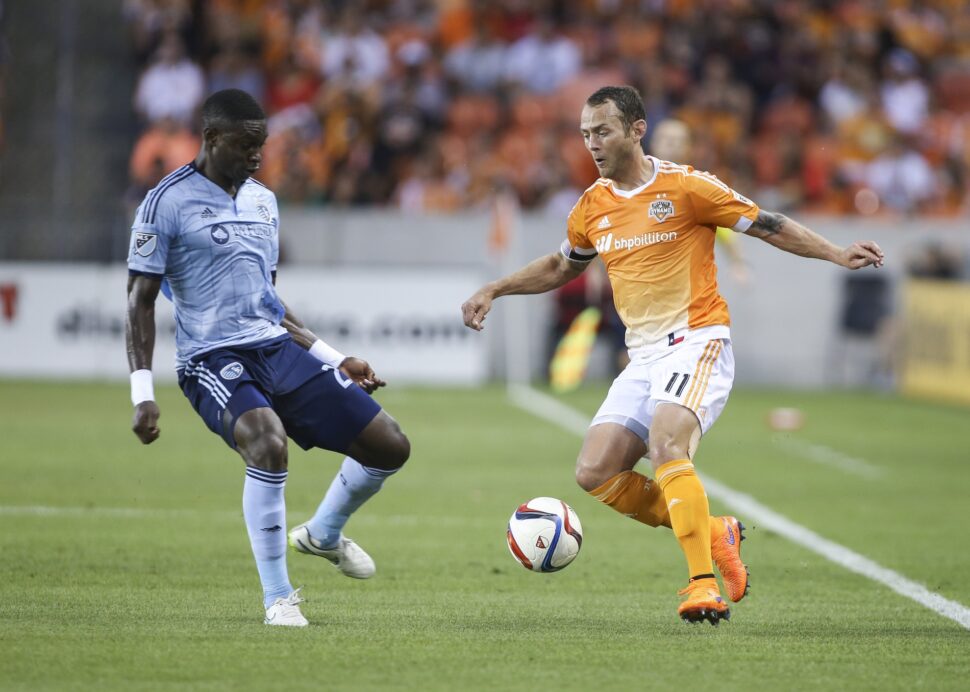 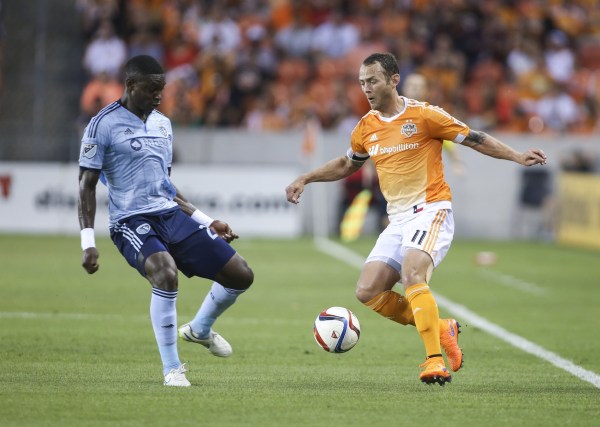 HOUSTON— In the past few seasons, games between Sporting Kansas City and the Houston Dynamo have become a rivalry match-up that has seen both teams coming out with their best foot forward.

Saturday’s clash was no different as it ended 4-4 with both teams managing to treat the public to a goal fest. Each team managed to score the four goals due to an equal part of defensive blunders and marvelous finishes from distance.

Feilhaber’s finish, his second of the night, came from range, as the midfielder smashed one from from long-distance to seal a point for the visitors.

The first goal of the match came from Sporting KC in the 3rd minute. Nemeth was capable of taking advantage of an Dynamo turnover, and transitioning it into a counter attack that he eventually turns into a shot that easily goes past Tyler Deric.

Sporting KC was not in the lead for long, though. As Barnes managed to score the tying goal in the 11th minute. The play started off of a Brad Davis throw-in that Bruin was capable of getting on the end of and getting into the box. He quickly lost the ball, but not before causing it to take a weird bounce off of two Sporting KC defenders. Barnes then easily pounced on the ball and fires to even it up at one.

Dwyer then decided to turn things into the Dwyer show as he was at the end of two very dangerous scoring opportunities. The pair of one-on-one counters were only thwarted by a quick thinking Tyler Deric that made a couple of saves that practically assured him yet another save of the week nomination.

While Sporting KC had Dwyer in great form, Houston was benefiting from a player of their own in Barnes. While he was not getting scoring goals or getting shots on goal. He was opening up space for players to get dangerous runs off.

One thing has been a constant in every Houston Dynamo team since the inaugural season, and that is their danger on dead ball situations. This game was no different as Davis managed to send a dangerous corner into the box that Bruin got on the end of for the goal. The goal places Bruin in second place for all-time Houston Dynamo goalscorers, behind only Brian Ching. Meanwhile, the assist places Brad Davis level as 3rd all-time MLS assists with Carlos Valderama.

The first half came to an end with Dynamo team that had taken complete control of the game. So it should come as no surprise that the second half started just as the first half ended.

In the first minute of the second half, Barnes managed to get at the end of a Nathan Sturgis pass that he buried for a goal from just outside of the box.

This night to remember for Barnes eventually turned sour as he was the cause of Sporting KC’s second goal of the night. Barnes made a back pass to Tyler Deric without paying attention to the fact that Dwyer was ready to pounce on it. Dwyer easily intercepted the ball, went one-on-one with Deric and buried it for the goal.

The Sporting KC goal changed the rhythm of the game as Sporting KC managed to take control of the game for the first time since the opening minutes. This control eventually led to a dangerous opportunity in the box that led to a penalty and red card on Houston Dynamo defender Jermaine Taylor for a questionable handball. Feilhaber sent the ensuing penalty shot into the back of the net.

However, all of this was short-lived as a ten-man Dynamo managed to earn a dangerous free kick that Brad Davis sent into the box for a Raul Rodriguez goal. This marks the Spanish defenders first goal as an Houston Dynamo player.

Even though the Houston Dynamo tried their best to hold on to the lead, Feilhaber managed to put it all even yet again with a golazo from distance. This goal came at the fifth minute of stoppage time.

For the upcoming match day, the Houston Dynamo will stay at home as the face FC Dallas in the Texas Derby. While Sporting Kansas City welcomes the Chicago Fire.