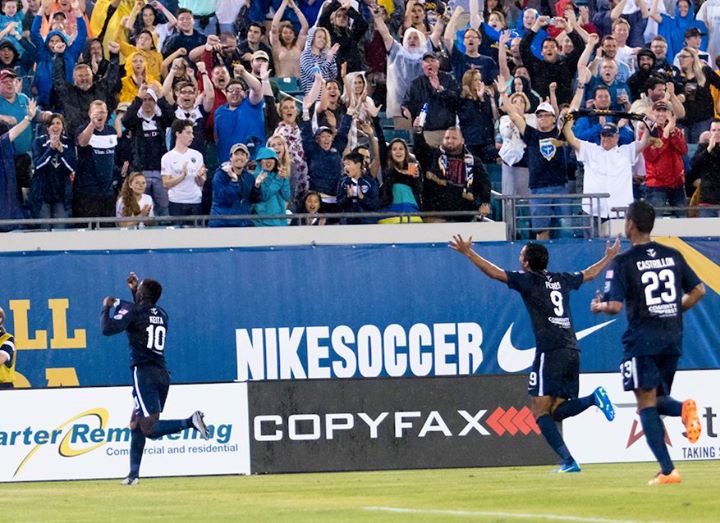 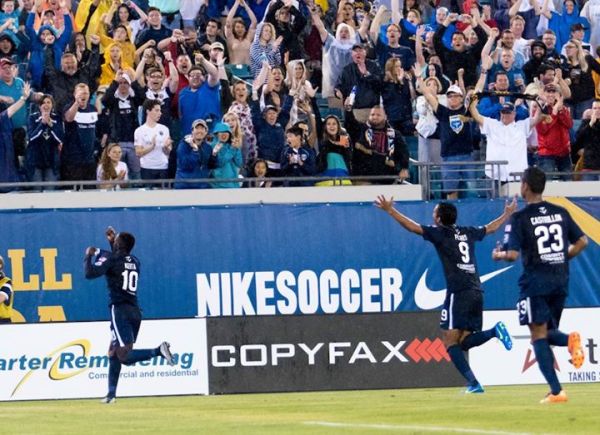 The 2015 NASL season has finally kicked off, and with it came a series of memorable moments, both impressive and disappointing.

The Jacksonville Armada led the way by shattering both goalscoring and attendance records in what turned out to be a 3-1 rout of FC Edmonton in the club’s first-ever game.

The Armada’s in-state rivals, the Tampa Bay Rowdies, also proved impressive in the opening week by taking down the reigning champions in the club’s first game of the Thomas Rongen-led rebuild.

It was an eventful weekend of NASL debuts, one with plenty of talking points, both on and off the field.

ARMADA QUICK TO FIND SUCCESS BOTH ON AND OFF THE FIELD

A record crowd showed up to EverBank Field to cheer on the Jacksonville Armada, and the hosts wasted little time in giving the fans what they paid to see.

Jemal Johnson scored in just 12 seconds, the fastest goal in the modern NASL era, to kickoff the Armada’s NASL history with a bang. It wasn’t just Johnson, though, as Alhassane Keita and Marcos Flores each contributed to lead the Armada to a resounding victory over FC Edmonton.

That victory carried into the stands, where the club drew a record 16,164 fans, the most in NASL history. Overall, a record-breaking weekend provided an ideal start for the Armada, as the club made major splashes both on and off the field to kick off their inaugural voyage.

The Tampa Bay Rowdies entered the 2015 on the heels of a major rebuild, and Thomas Rongen’s side couldn’t have faced a tougher first test than that of the defending champions.

The Rowdies passed that test with flying colors, absolutely dismantling the San Antonio Scorpions on their home field. Save for a stoppage time finish from Omar Cummings, the Rowdies were flawless in what turned out to be a 3-1 victory.

Throughout the offseason, Rongen spoke of rebuilding his team’s spine, starting with captain Marcelo Saragosa, to provide stability to back up the Dutchman’s philosophy of attacking soccer. While early season difficulties were to be expected, that spine faced none, paving the way for some of the team’s younger players like Darwin Espinal and Corey Hertzog to make major contributions.

It’s hard to take too much from one game, especially a season opener, but Rongen’s spine looks as tough as he expects it to be, and that bodes well for the Rowdies.

The New York Cosmos escaped from Fort Lauderdale with a 1-0 victory, but there were concerns aplenty for a side that is widely regarded among the league’s best.

The chief question lies with the health of Raul, the team’s big money offseason acquisition, who was removed early in the second half due to a hamstring issue. Hampered by the injury, the Real Madrid star’s debut was slightly disappointing, as the Cosmos didn’t look threatening until after Raul’s substitution.

It was always going to take time for the Spanish legend to adjust to the physicality of the American game, and that adjustment was certainly not aided by his inability to play without discomfort. Raul will adjust in due time; he’s too talented not to.

Where issues lie is in the immediate future. Raul is expected to be ready for next week’s matchup with Indy Eleven, but should he not be able to go, the Cosmos have plenty of options to fill in in his stead. Maybe the professional debut of Haji Wright, perhaps?

It was an offseason of change for the NASL, and the fans responded in numbers.

The league revealed Sunday that a combined 44,479 fans were in attendance for Saturday’s slate of five games, an average of 8,895 per contest. Buoyed by the Armada’s 16,164 and the Strikers’ 11,691, the 2015 opening week attendance compares favorably with last season’s average of 7,289, which saw the boost of Indy Eleven’s debut crowd.

The challenge now lies in continuity. It’s easy to break records and make statements in week one, but difficulty lies in keeping fans occupied throughout a season. Jacksonville appears to be off to a great start, but the league’s true growth will be measured on whether or not the upswing continues as the season reaches the dog days of summer.

Much like in MLS and generally throughout CONCACAF, the NASL’s opening week could not escape the wrath of poor refereeing. The chief culprit of the weekend was Robert Sibiga, whose series of questionable calls left a bad taste in the mouth of Ottawa Fury FC.

Sibiga ruled for penalty kicks in quick succession in Fury FC’s matchup with the Carolina RailHawks, the second of which appeared to be given for a foul outside the box. In stoppage time, with Fury FC down a goal, matters were made worse when midfielder Julian de Guzman was ripped down while in possession but received no call, leading to an insurance goal for the RailHawks.

Fury FC head coach Marcos Dos Santos was notably furious with the referee’s decisions after the game, and even RailHawks boss Colin Clarke admitted that it may have been a foul.

For years, refereeing has been a major problem throughout the North American soccer pyramid, and Saturday’s action proves that the NASL is far from unaffected by the epidemic.