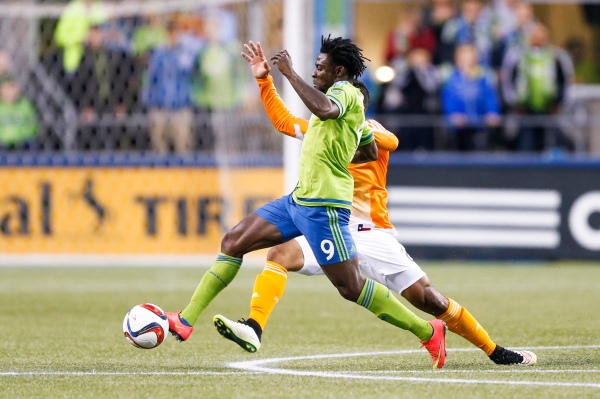 SEATTLE– Sometimes in soccer it only takes a moment, and that was certainly the case for the Seattle Sounders on Saturday night.

A Clint Dempsey assisted moment of brilliance from Obafemi Martins was all the scoring the Sounders (2-1-1, 7 points) needed to top the Houston Dynamo 1-0 in front of 39,860 at CenturyLink Field.

With five minutes remaining in the first half of an often testy and rarely fluid match, Martins stepped into a Dempsey pass, spun on defender Jermaine Taylor, and smoothly buried a 12-yard shot past goalkeeper Tyler Deric for the lead.

It was Martins’ third goal of the season and Dempsey’s second assist. The two are tied for the club’s goal-scoring lead.

The Dynamo (1-2-2, 5 points) enjoyed a man-advantage after referee Ted Unkel issued a red card to midfielder Gonzalo Pineda in the 56th minute, but could never capitalize.

Despite the advantage, and despite consistently applying pressure down the stretch, the Dynamo failed to generate many legitimate chances. Head coach Owen Coyle pulled tenacious defensive midfielder Luis Garrido for striker Will Bruin in the 64th minute, transitioning from a 4-5-1 to a 4-4-2 formation.

For his part, Sounders head coach Sigi Schmid brought in extra defenders, closing out the match in a 5-3-1, a formation that successfully clogged up Houston’s attacking third.

In the 66th minute, Brad Davis got on the end of a far-post DaMarcus Beasley cross, but sailed it over the crossbar. In the 74th minute, former Sounder Nate Sturgis sent a 25-yard shot into the CenturyLink stands. In the 80th minute, Davis narrowly missed high right on a free kick from well outside the box. Four minutes later Ricardo Clark managed to redirect a pass toward goal as he fell to the ground, but goalkeeper Stefan Frei easily dropped to smother the shot at the right post.

Pineda received the red card for a high challenge that ended with Clark taking a knee to the chest.

Coyle was forced to pull center back Raul Rodriguez from the match in the first half. The Spaniard, playing his first season in MLS, took an elbow from Deric in the 25th minute and left the pitch bleeding from his forehead. David Horst, the Dynamo’s 2014 starting center back, came on for Rodriguez.

It was a tense match frequently bogged down in the midfield, particularly before the red card changed the nature of the match midway through the second half..

“It was a workmanlike effort,” said Schmid, “and we’re never going to apologize for three points.”

Martins and Osvaldo Alonso both had chances to put the Sounders up 2-0 after the red card. In 64th minute Alonso turned over a Houston midfielder, thundered into the heart of the box, and forced Deric into a diving save. Eleven minutes later Martins raced up the left side of the pitch and across the penalty area before sending a right-footed shot just over the crossbar.

Looking forward, both clubs are back in action next weekend. The Dynamo Host the Montreal Impact (0-2-1, 1 point), while the Sounders visit the LA Galaxy (1-2-1, 2 points).