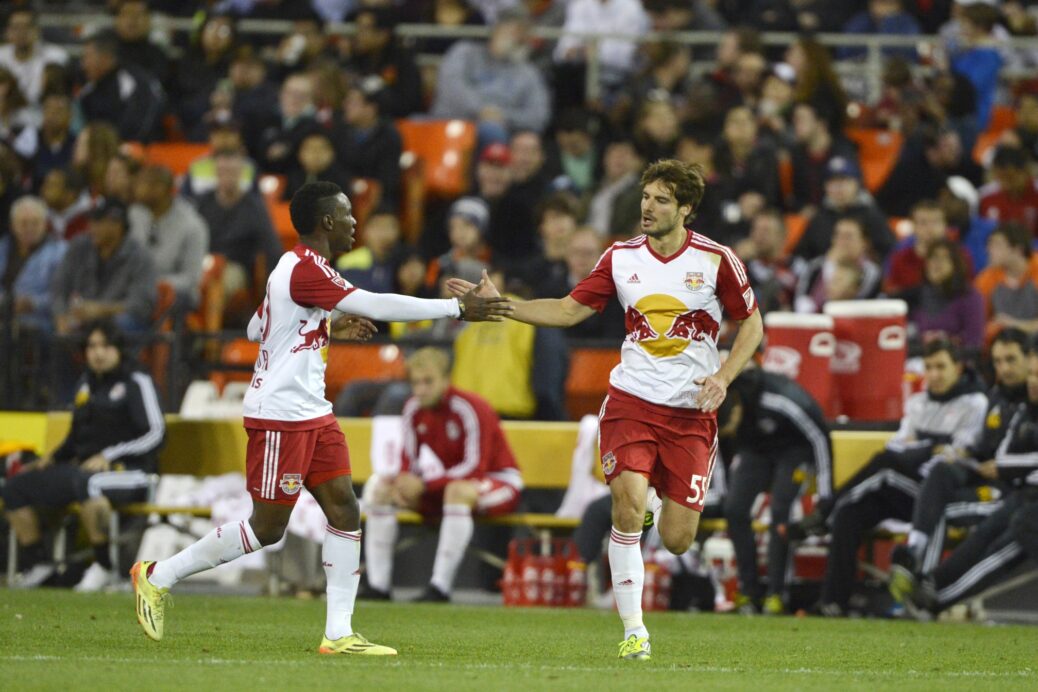 The New York Red Bulls handed Atlantic Cup rival D.C. United a taste of its own medicine on Saturday.

For the past two weeks, DCU has been the team triumphing with late-game heroics. This time,it was the visiting Red Bulls who struck in the 90th minute when Lloyd Sam converted the rebound from a Sacha Kljestan free kick to secure a 2-2 draw.

After falling to the Red Bulls in March, DCU offered a solid response to take a two goal lead thanks to Perry Kitchen. The midfielder struck with his head and from long range, and it appeared that the home side might even-up the season series.

A header from Damien Perrinelle called that into question before Sam’s late goal to take the Red Bulls into second place in the Eastern Conference, two points behind DCU in first.

Hamid’s solid game in goal had one blemish, but it proved to be the all-important one. With five saves to keep DCU in the lead, he perhaps should have had a sixth.

On a free kick from about 30 yards out, Sacha Kljestan sent a hard shot on goal that bounced in front of Hamid. He could only deflect it away, right into the path of a rushing Sam, who put it inside the far post to equalize with only stoppage time remaining.

An even contest first fell slightly into D.C.’s favor in the 26th minute. Just moments after he appeared to block a Red Bulls shot with his arm, left back Taylor Kemp swung in a corner kick at the other end that was headed home by Kitchen. The midfielder leapt in front of goalkeeper Carlos Robles, hanging in the air to meet the cross.

Kitchen’s second effort was even more impressive. A constant danger from the left wing, Chris Rolfe decided in the 67th minute to cut inside. He offered the rolling pass to Kitchen, who obliged by smashing a shot inside the right post for a two-goal cushion.

Both teams won their regular season home matches against each other with shutouts last season, but that trend was broken by Perrinelle. The defender rose between a group of DCU defenders to head in a corner kick just a minute after Kitchen’s second goal to pull one back for the Red Bulls.

By now the game had significantly opened up, and it almost resulted in another DCU goal. Rolfe was at it again, this time collecting a bouncing ball from about 20 yards out and unleashing a shot that landed square in Robles’ chest.

The next test for D.C. comes at home against Houston Dynamo next Saturday. The Red Bulls return to action on Friday, also in front of a home crowd against San Jose Earthquakes.