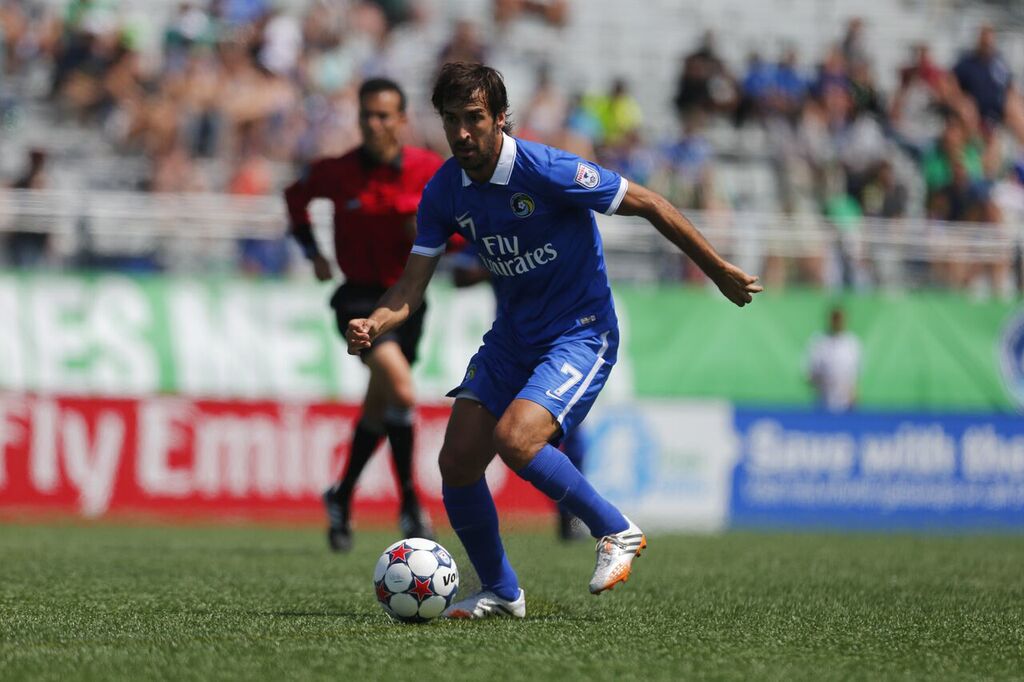 Photo by the New York Cosmos

Six weeks into the NASL season, this much is certain: the New York Cosmos are good.

With Sunday’s 4-2 victory over FC Edmonton, the Cosmos remain dominant atop the league, signaling themselves as the league’s overwhelming favorites.

Things become a bit more muddled further down the table, though, as nearly every time aside from the Cosmos have experienced some major ups and downs. Just over halfway through the NASL season, the table remains ever-shifting, giving each team a chance at ending the Spring in a favorable position.

Here are some of SBI’s observations from Week 6 of NASL action:

Through the opening six games, it is apparent that the New York Cosmos are a class above the rest. With the Spring title all but locked up, the Cosmos should have a new focus: history.

Anchored by goalkeeper Jimmy Maurer, who has allowed just three goals in six games, the Cosmos have had little problem keeping teams off the board. Led by Raul and Walter Restrepo, the Cosmos attack comes from all sides.

The question is now beginning to arise: Is this team good enough to run the table?

That remains to be seen. The club’s final four games of the Spring campaign look to be the team’s toughest, as matchups with the RailHawks, Scorpions, Minnesota United and Jacksonville Armada loom. All four teams will present certain challenges, but to this point, the Cosmos have remained unfazed by anything in their path.

While an unbeaten Spring campaign may yet remain a challenge too lofty, the Cosmos still have a chance to assert themselves as the most dominant Spring Season team in the league’s short history.

Since the NASL switched to a dual season format in 2013, the highest point total achieved in a Spring campaign came from the 2013 Atlanta Silverbacks, who collected 21 points in 12 games. As things stand, the Cosmos have four games remaining and sit on 14 points, giving the club a chance at breaking an unlikely record despite having two less games played.

For the Cosmos, the next four weeks will likely see the club snag a Spring title and earn a spot in this year’s postseason. However, it could also prove to be much more, giving the Cosmos yet another feather in their cap as the NASL’s premier club.

This isn’t how an expansion team is supposed to play.

With Saturday’s victory over Indy Eleven, the Jacksonville Armada jumped up to second place in the standings, assuring the team’s status as more than just an everyday expansion team.

To this point, the Armada have avoided the early-season expansion woes while turning their home field into a fortress. There have been few struggles and little frustration; just results.

Those results come as a result of an attacking, free-flowing style that has proven effective so far. While most teams have chemistry issues in the early going, Marcos Flores, Bochy Hoyos, Alhassane Keita and Jemal Johnson have each registered goals to this point, helping propel the Armada up the table.

The Armada have made themselves more than just a mere expansion team, as the club has made major strides both on and off the field through the opening weeks. As things stand, it’s time to start looking at the Armada as what they are: a team that could contend down the stretch in both the Spring and Fall seasons.

The Atlanta Silverbacks lost their first game of the season last time out, but that doesn’t mean that the team hasn’t reached a major crossroads.

With seven points through the first six games, the Silverbacks have done well to hang around and pick up points on nearly every stop. However,  those results can be a bit misleading, signaling time for the Silverbacks to step up as contenders, or fall back down to where they were projected in the preseason.

The main concern remains goals. With just four finishes and 14 shots through six games, the Silverbacks’ attack is amongst the worst in the league. In addition, all four of those finishes came in the team’s first three games, as the Silverbacks have been held scoreless in three straight outings.

In general, the team’s defense remains among the league’s best, anchored by veterans Simon Mensing and Rauwshan Mackenzie. However, that defense can only do so much to grab points, and unless the goals start flowing, it appears that the club is in for a difficult conclusion to the Spring Season.

PARITY REMAINS EVIDENT THROUGHOUT MAJORITY OF THE LEAGUE

While the Cosmos have all but claimed the Spring crown, the rest of the league looks to be in for a dogfight for positioning.

As things stand, just five points separate the second place Armada and last place Scorpions, setting up a frenetic second half of the Spring season.

The Cosmos have essentially locked up the Spring’s postseason birth, but incentive remains for the remaining 10 teams to grind through before the Fall. With two postseason berths up for grabs for the highest combined finishers, the end of the Spring season could prove the difference in a postseason appearance or an early ending.

For now, parity remains the name of the game, even if it is, unfortunately, well below the title race. Unless several teams step up to distance themselves for the rest of the pack, the Fall campaign looks destined to be a true battle with every team involved.