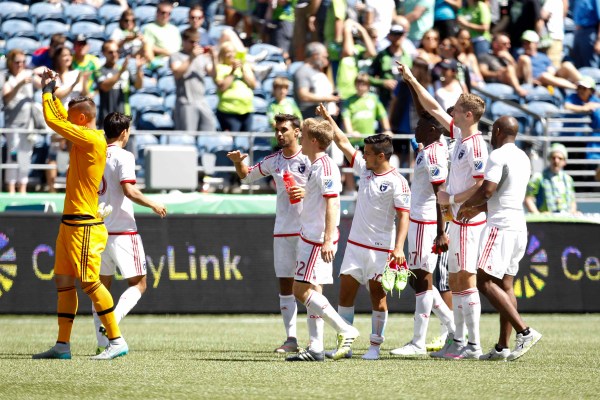 SEATTLE — The San Jose Earthquakes opened a new stadium this year, but they have turned the fortress that is CenturyLink Field into a second home.

The Earthquakes won in Seattle for the second time this season on Saturday afternoon, riding goals from Sanna Nyassi and Matias Perez Garcia to beat a shorthanded Sounders team, 2-0.

Nyassi, a former Sounder, opened the scoring in the 28th minute, finding himself wide open on the right half of the penalty area and finishing cleanly inside the far post.

Garcia added the insurance goal in the 73rd minute, dancing by Andy Rose and Chad Marshall to beat goalkeeper Stefan Frei from 14 yards out out.

The Sounders were missing Obafemi Martins and Clint Dempsey. Martins is out three to six weeks with a groin injury, while Dempsey sat for the first of a three game suspension for onfield misbehavior in Wednesday’s U.S. Open Cup match against the Portland Timbers.

Despite controlling possession for much of the first half, the Sounders couldn’t find the back of the net without their star strikers.

Goalkeeper David Bingham denied Rose at the doorstep on a 34th-minute near-post cross. It was as close as the Sounders came to equalizing.

The Earthquakes (6-5-4, 22 points) handed the Sounders (9-5-2, 29 points) their only other home loss this season in March, but currently sit outside the playoff spots.

The clubs meet for a third and final time at newly opened Avaya Stadium in San Jose in September.

Looking forward, the Sounders visit the Philadelphia Union on Wednesday, while the Earthquakes host the Galaxy next weekend.