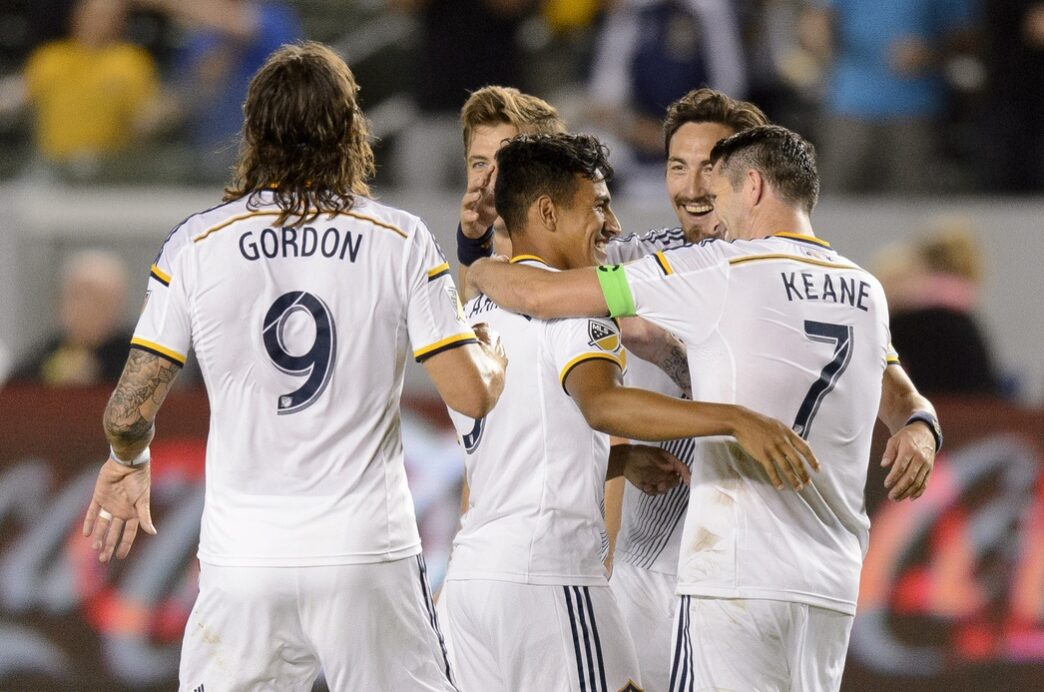 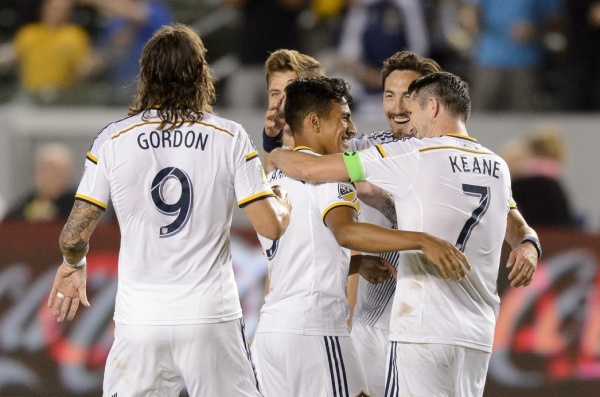 CARSON, Calif. — On Pride Night at Stub Hub Center, Robbie Rogers and the LA Galaxy had a lot to be proud of following the Galaxy’s latest masterpiece.

The Galaxy put together their second straight dominating performance, overwhelming the 10-man Portland Timbers on the way to a 5-0 thrashing, the team’s second-straight five-goal match.

Robbie Keane notched a goal and two assists, while midfielder Sebastian Lletget turned his latest outstanding showing, delivering a goal and drawing a penalty in the nationally-televised game.

The Timbers endured a nightmare evening, surrendering more goals in one match than they had in their previous five matches combined.

Despite seeing his team up its goal total to 16 in its past three matches, Galaxy coach Bruce Arena was careful not to get too carried away. “There’s going to be real good games, and some that aren’t. I don’t think this is really a 5-0 game, but we played very well at times,” Arena said.

Lletget was the first on the board in the 13th minute following a deflected cross from Dan Gargan—the goal is Lletget’s 4th in as many games and he’s hoping to keep it going in next week’s big rivalry game against San Jose.

Just five minutes later, after some sloppy play from Portland’s Diego Chara, Juninho played Lletget in again, and despite the efforts of forward Max Urruti to track all the way back to his own box, Lletget got tangled up and earned the Galaxy a penalty, which Robbie Keane happily put away.

Keane wasn’t done however, slipping in  Rogers for his first goal in a Galaxy uniform. Rogers hadn’t scored in MLS since 2011 with the Columbus Crew, and it came on a special night for the veteran.

“I didn’t think I was going to be as emotional as I was,” Rogers said of the goal. “Tonight is obviously Pride Night, so it was kind of special.”

The Galaxy followed up their strong first half with an equally-impressive second half. Lletget ran the Timbers ragged, and Juninho dictated the game from deep in midfield.

The Timbers brought on Fanendo Adi in the 70th minute to try and generate some offense, but just two minutes later, the Galaxy were back at it through a wonderful goal by Juninho. Jack Jewsbury gave the ball away in his own half, which Juninho played into Keane’s feet. The Irishman was happy to return the ball and Juninho poked home from a few yards out.

It went from bad to worse for the Timbers in the 75th minute, when Liam Ridgewell went flying up for a header and kicked out at Alan Gordon, earning a straight red card and Gordon a yellow for shoving him after the play.

But LA wasn’t finished there, late substitute Jose Villareal put the icing on the cake with a beautifully curled low free-kick in the 82nd minute to finish the night at 5-0.

Despite some early pressure at the beginning of the game, Portland struggled to create any sort of threatening offense all-night and registered their only shot on goal in the dying minutes of the game. The loss ends their 4 game win streak and sees them drop to 4th in the Western Conference.

Next stop for these two sides is Rivalry Week, with Portland hosting Seattle, and LA road tripping up to San Jose. No one is more excited for the California Clasico than Lletget who is looking to make it 5 goals in 5 games when he returns to his hometown.

“It’s a special one for me, I have about 50 tickets for friends and family—it’s ridiculous.”