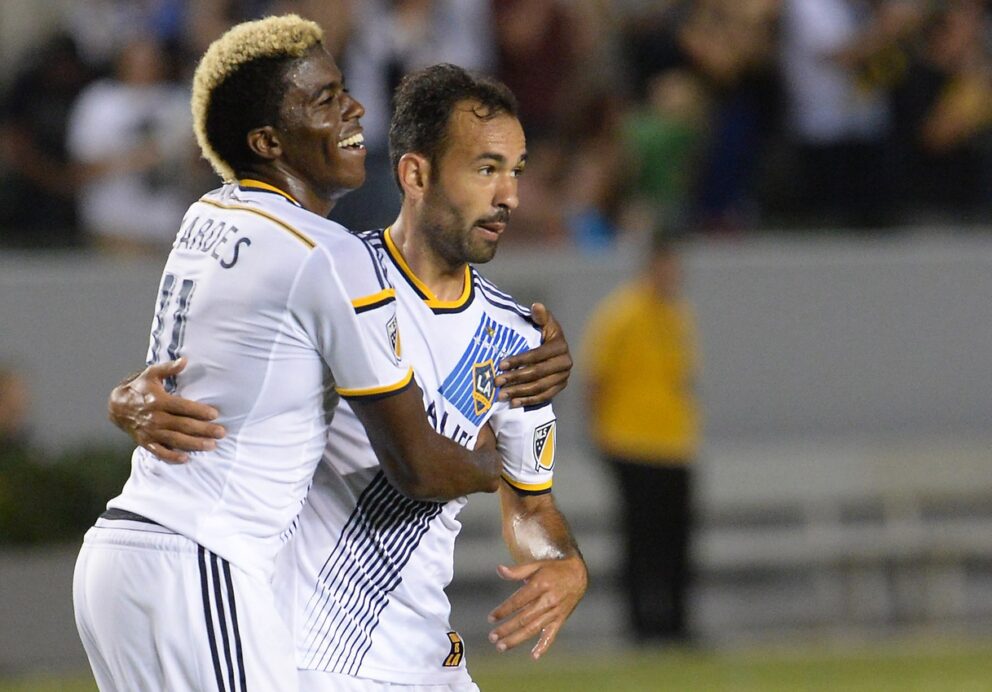 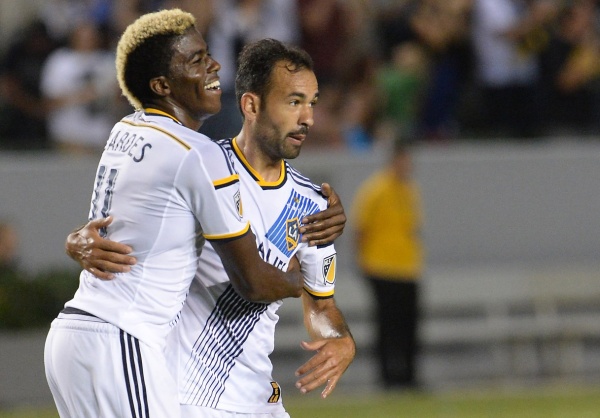 CARSON, Calif. – While Gyasi Zardes has been making a strong impression in the red, white, and blue of the U.S. Men’s National Team this year, his output in blue and gold for his club side had so far been mixed.

Until Saturday that is, when the LA Galaxy forward notched a fierce goal, added two assists, and generally terrorized the Philadelphia Union defense all night long, as the Galaxy rolled to a 5-1 win before a jubilant home crowd of 23, 875.

Zardes’ lone goal came in the 56th minute, when he gained control of the ball at midfield and sprang a wide open Robbie Keane with a long ball down the left flank. Keane patiently drew the defense to him, then fired a tasty forty-yard cross onto the foot of the streaking Zardes. Zardes elevated and converted the chance into the roof netting.

As pretty as the goal was, it was Zardes’ pace and distribution that undressed the Philadelphia back line relentlessly. Though he will not be credited with a goal or an assist, the twenty three year old created the opening goal in the 23rd minute, when he corralled a Baggio Husidic squared ball, fired off a shot which hammered off the goal post and directly back to Husidic, who neatly brought the ball down and stroked it past the sprawling Philadelphia goalkeeper Brian Sylvestre for the game’s opening tally.

“I’m growing as a player, and I’m just trying to be as effective as possible in the attack” continued Zardes, discussing his offensive outburst. “It was a veteran lineup out there.  They find the game. Just being more aware of my teammates has helped me as a player.”

Zardes’ two official assists were both off balls expertly played back to teammates waiting at the edge of the area. The first was to Juninho, who uncharacteristically brought the ball down rather than fire off a long-range shot, ducked under a charging Sheanon Williams, and poked the ball past Sylvestre to double the Galaxy lead.

Sebastian Lletget was also the beneficiary of Zardes’ largess, taking a perfectly-weighted pass from Zardes as he sped to the penalty spot and fired the ball into the back netting. It was the 22-year-old newcomer’s third goal in as many games.

“I feel good.  I think physically, that was the big issue in the beginning, but fitness-wise, I’m really coming along” said Lleget, who was signed by the Galaxy from West Ham in May. “Three goals, three games…as soon as the next game starts I forget about all that. I just want to get another one.”

Stefan Ishizaki added a highlight goal of his own, slamming an Omar Gonzalez headed back pass into the turf on the volley to beat the hapless Sylvestre once again. It was his first goal of the season.

“Obviously, it’s a real confidence booster” said Ishizaki of his goal. “But I’m thinking more about other parts of my game, my dribbling, making good decisions.”

The fact that the Galaxy scored five goals is promising for a team that has struggled in the final third at times this season. But the fact that the five goals were scored by five different Galaxy players was key to the team’s success tonight – all five goals came off some form of combination play – and will be critical to the defending champions moving forward. The Galaxy have been lambasted with injuries so far this season, and tonight was perhaps the first time since opening night in March that they’ve fielded an entire first choice starting eleven.

“It is good to have some of these players back” said Galaxy head coach Bruce Arena after the match. “It gives us a little more quality, obviously, in the final third, but we can still play better than we did tonight.”

To the Union’s credit, this game could have gone differently. Philadelphia dominated the first fifteen minutes of play, earning six corners in the first quarter hour, and when Zach Pfeffer forced a diving save out of Galaxy goalkeeper Jaime Penedo in the 8th minute, it was the Galaxy on the back foot. Cristian Maidana clanged a rocket of the crossbar in the 72nd minute, Maurice Edu missed over the bar on a low header in the 12th minute.

Unlike many teams that come to Los Angeles and bunker in in hopes of nabbing a draw and a point before getting back on a long flight home, Philadelphia pressed the attack whenever it was available, and the result was an entertaining and high scoring match.

But Zardes’ tenacious runs, coupled with creative wide play from Husidic and Ishizaki, slowly unraveled the Union. C.J. Sapong’s picturesque back-to-goal strike in the 58th minute was well taken, but by then the Union were fighting a steep uphill battle against a fluid and increasingly confident LA side.

“I don’t think we were as dominant as the score would indicate” continued Arena. “It was far from a complete victory tonight, and we’ve got a ways to go.”

The Galaxy will stay at home to host the Portland Timbers in a midweek match on Wednesday night, before traveling to San Jose for another installment of the California Clasico on Saturday.

The Union also have a midweek match. They now fly home to host the Seattle Sounders on Wednesday, and then welcome the Montreal Impact on Saturday.