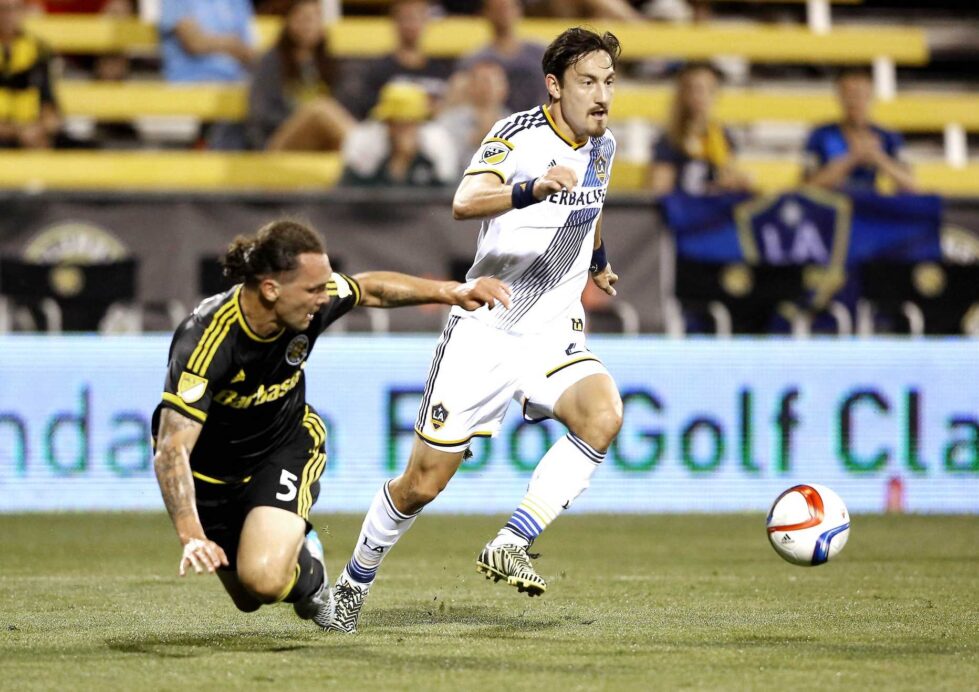 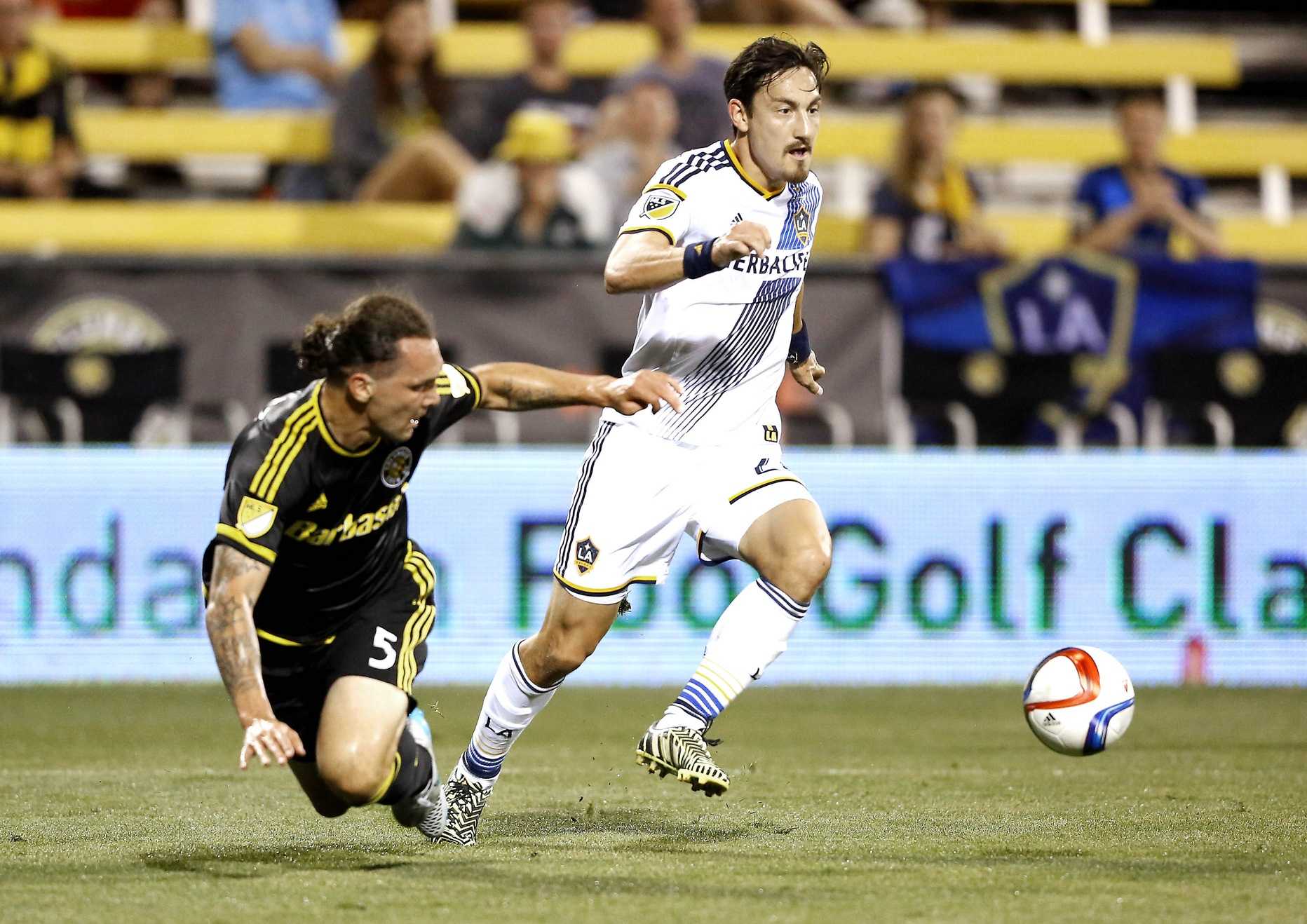 COLUMBUS, Ohio — Taking advantage of a slow start from the Columbus Crew following a long weather delay, the LA Galaxy came away with a hard earned point in a 1-1 draw at MAPFRE Stadium in Columbus on Saturday night.

Young American midfielder Sebastian Lleget opened the scoring for the Galaxy before Crew Designated Player Federico Higuain equalized in the second half. The Crew had a late chance to win the match but they were stymied and extended their winless streak to six games.

The Galaxy, meanwhile, moved into sole possession of sixth place in the Western Conference with 21 points, one ahead of the Houston Dynamo.

“It’s a good result,” Galaxy head coach Bruce Arena said following the match. “Our team played well tonight. (It was) not an easy game, another game on the road with a weather delay and that’s hard on the players. We lost a couple of players with some muscle injuries due to the delay and it wasn’t easy. I give our guys a lot of credit. They played hard and to get a point on the road is never bad.”

In a game that was delayed for two hours and 14 minutes due to severe weather, it was the Galaxy who started on the front foot. Both teams were awarded a 15-minute warmup period, but it was clear that the Crew weren’t mentally into the game from the start.

The Galaxy consistently won the ball up the field due to their high pressure and compact defending, while the Crew passing game wasn’t crisp, with a number of unforced errors gifting possession to the visitors.

Lletget marked his first start in impressive style. The 23-year-old midfielder was a late replacement in the lineup in place of Edson Buddle, who suffered a muscle injury in pregame warmups. Lletget found space on the left side of the box and fired home his first MLS goal, low and under the hands of Crew goalkeeper Steve Clark in the 14th minute.

The goal didn’t serve as a wake-up call to the Crew, as the Galaxy continued to dominate possession and control the tempo of the match. Winger Stefan Ishizaki had a goal disallowed controversially due to a foul called, and toward the end of the half, midfielder Jose Villarreal fired a volley off of a corner, forcing a save from Clark.

Former Crew midfielder and now Galaxy left back Robbie Rogers nearly made it 2-0 in the 43rd minute when he made a blistering run down the left wing and then skinned two Crew defenders with a cut-back in the box, but he put his shot well wide of goal.

“(In the) first half we weren’t in rhythm, there wasn’t quick enough movement, they were pressing us and they were doing a good job, but we can be better than that,” Crew head coach Gregg Berhalter said. “We know that. We deserved to go 1-0 down.”

After the halftime break, the Crew came out with renewed spirit and energy, and started to pass the ball around the field faster and constantly switch the point of attack.

The change in intensity created some chances from crosses into the box, but Galaxy goalkeeper Jaime Penedo wasn’t tested. The Galaxy started to regain their footing in the match around the hour mark.

Then out of the blue, the Crew equalized.

In the 66th minute, Crew midfielder Tony Tchani played winger Ethan Finlay in behind Rogers. Galaxy centerback Leonardo slid over to clear the through ball, but it was partially blocked by Finlay, allowing the ball to continue moving toward goal.

Finlay took a touch, looked up, and then cut a ball back to the penalty spot where Higuain fired home a one-time finish.

“Ethan got into the game,” Berhalter said. “It was something where [his level of play] from the beginning wasn’t there, but he kept going and that’s why when you have that much determination, you are going to get a breakthrough and he did. And Federico, we talk a lot about him, you guys know how important he is to our group and we need him to get on the ball, we need him to keep moving and create and he did that tonight.”

Both teams had a number of half chances for the rest of the match, but Penedo made perhaps the save of the night in the 82nd minute. Finlay made a run into space down the right wing and at the end-line chipped in a cross that found the head of Justin Meram, who powered a header that was tipped over the bar by Penedo.

“First half, we still had a lot of possession and they were just working hard and closing the gaps, but the way we play, at some point we’re going to gas them out because of the way we keep the ball,” Meram said. “You saw in the second half it opened up. I had a couple of great chances and Kai (Kamara) and Pipa (Higuain did as well). We were there and we were knocking. I think we took it to them in the second half and I think we could have pulled a win out of this one.”

The Crew next face a U.S. Open Cup test against the Richmond Kickers before returning to MLS action at home against the New England Revolution on Saturday. The Galaxy host the Philadelphia Union that same day, following a midweek domestic cup encounter with PSA Elite.