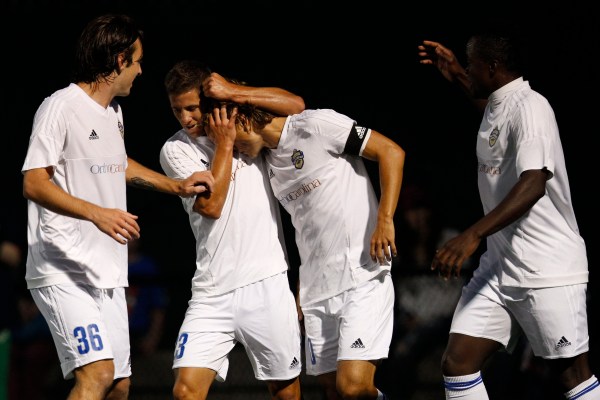 MLS teams dominated the Fourth Round of the 2015 U.S. Open Cup, but Wednesday’s action offered plenty of penalty-kick drama and a few upsets.

In Wednesday’s most thrilling match, the New York Cosmos progressed to the Round of 16 after they came back from a two-goal deficit and defeated New York City FC, 4-3, in penalties.

The Cosmos weren’t the only side to rock the boat, though, as Charlotte Independence knocked the New England Revolution out of the tournament with a 1-0 victory on the road.

Meanwhile, Orlando City SC needed two heroic stops from goalkeeper Earl Edwards Jr. to sneak past the Charleston Battery after 10 rounds of penalty kicks. Orlando City and the Battery battled it out in the 120 minutes of play, with four penalties being called along the way.

The drawing for Fifth Round pairings will take place on Thursday. Here is a closer look at the other action from around the U.S. Open Cup on Wednesday below:

Columbus Crew SC started Wednesday’s U.S. Open Cup goal-fest with a bang, as the visitors knocked out the Richmond Kickers, 3-1.

Adam Bedell got things going for Crew SC in the 17th minute after a long buildup from the back and a cross in from the right flank.

The USL side made things interesting in the 23rd minute when Fred Owusu Sekyere tied the score at one apiece.

However, just before halftime Ethan Finlay gave the visitors the lead, and Bedell found his second in the 63rd to close the game out for Crew SC at Richmond City Stadium.

D.C. United started well and ended with a strong two-goal punch in its 3-1 win over the Pittsburgh Riverhounds, scoring two in extra time to advance in the U.S. Open Cup.

D.C. United went up in the early goings when Facundo Coria tallied the first of the affair in the eighth minute, but Riverhounds midfielder Rob Vincent equalized 15 minutes later.

Both sides struggled to find the game-winner in regular time, but D.C. United’s endurance undid the Kickers in the additional 30 minutes of play, as both Kofi Opare and Nick Deleon scored in the first 14 minutes of extra time to give the MLS side the victory.

The first U.S. Open Cup upset was handed out by Charlotte Independence when it edged the New England Revolution at Soldiers Field Soccer Stadium in Boston, 1-0.

The Revolution starting lineup featured a number of reserves, and the USL side took advantage of the lineup decision, as Jorge Herrera sent a beautiful curling effort into the top-right corner of the net, giving the visitors the unlikely advantage.

The Independence would hold onto that lead until the end, progressing to the Round of 16 in its inaugural season.

Eight goals scored in 120 minutes of play was not enough at Blackbaud Stadium Wednesday.

Orlando City and the Charleston Battery went punch for punch in one of the most exciting U.S. Open Cup Forth Round contests, as both scored four goals in 120 minutes of play, sending the game to penalty kicks.

The Battery would take the lead when Jarad van Schaik netted the first of the night in the 58th minute, but Orlando City was there with an immediate reply. While Lewis Neal scored the first of the day for the Lions, Carlos Rivas netted a hat-trick, tallying all three from the spot.

Battery forward Dane Kelly claimed one of his own in regular time, and midfielder Justin Portillo had one of the goals of the tournament in extra time while also adding one from the penalty spot to keep his side level.

However, in penalties, Orlando City goalkeeper Earl Edwards Jr. came up big twice to see his side advance, 8-7.

Leonel Miranda scored the Dyanmo game-winner in the 24th minute after Chandler Hoffman slotted him a pass in the box for the simple finish. And in the waning minutes, Ricardo Clark finished the USL’s Aztex off with a lovely chip to send the Dynamo into the Round of 16 with a 2-0 win.

GALAXY POUND PSA ELITE TO REACH ROUND OF 16

The Los Angeles Galaxy had no issues defeating PSA Elite Wednesday, and they saw the return of Ireland international Robbie Keane, who tallied a hat-trick in the team’s 6-1 win.

Michael Salazar gave the underdogs the surprising lead in the 12th minute, but the Galaxy would prove too much to handle for the team that plays in the United States Adult Soccer Association.

After scoring his first MLS goal vs. Columbus Crew SC last Saturday, Sebastian Lletget erased the early deficit three minutes after the opener, and U.S. Men’s National Team forward Gyasi Zardes was there four minutes later to give the hosts the lead.

Keane netted his first near 30 minutes played and scored twice in the second half to put the game out of reach. Baggio Husidic tallied a sixth in the 77th minute to put the game to bed.