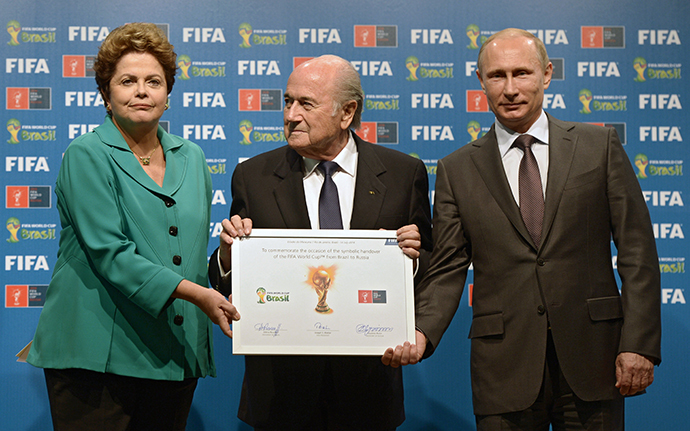 With the economy currently contracting due to low oil prices, Russia has cut down the nation’s World Cup budget in a major way.

Prime Minister Dmitry Medvedev has signed an order to cut the budget for the 2018 World Cup by 29.2 billion rubles ($544 million) to 631.5 billion rubles ($11.8 billion). Many of the budget cuts came in the form of luxury hotels, which the country is fearful will lie unused following the conclusion of the tournament.

Sports Minister Vitaly Mutko insists that the budget cuts will not effect stadiums, which have been an issue in recent months due to the decline of the ruble. However, Russia has reached a deal with FIFA that will see the number of training bases provided for the teams from 48 to 36, or three per stadium.

Federal government will be providing 335 billion rubles ($6.25 billion), more than half of the total budget, while regional governments, state-run companies and private investors will make up the rest of the money.

If reports out of Uruguay are to be believed, the race for FIFA’s presidency upon Sepp Blatter’s resignation is about to get a lot more interesting.

Diego Maradona will be among the candidates to make a run at the position, according to Uruguayan author and journalist Victor Hugo Morales. Maradona has long been a critic of the incumbent Blatter, going so far as to say that he is “enjoying” the current turmoil surrounding the organization.

“He told me he was going to run for president of FIFA and authorized me to inform,” Morales said. “‘I am a candidate’ were the words Diego Maradona used to answer me when I consulted him about the nomination for the presidency of FIFA.”

If Maradona does run for the presidency, he will join Brazilian legend Zico and Liberia Football Association chairman Musa Bility, both of whom have already stated their intentions of joining the race.

Chilean goalkeeper Claudio Bravo is taking both his current and former club to court in an effort to recoup money from last year’s transfer.

Bravo has launched a law suit against Barcelona and Real Sociedad seeking to claim 1.3 million euros ($1.48 dollars), or 10% of the transfer fee exchanged between the two clubs upon his signing with Barca last July.

Barcelona officials are reportedly expected to meet with Bravo’s representatives in the coming days.

The goalkeeper made 37 appearances for Barcelona this past season and set a La Liga record of not conceding for 754 minutes to start the season.

Italian club Parma has declared bankruptcy after an investor pulled out at the last minute and now faces demotion all the way down to Serie D. (REPORT)

Striker Mario Mandzukic is set to have a medical Monday to complete his move to Juventus. (REPORT)

Sevilla insists that forward Carlos Bacca will not depart the club unless his release clause is met. (REPORT)

What do you make of Russia’s budget cuts? How would Maradona fare in the presidential race? What do you expect to happen with Bravo’s case?