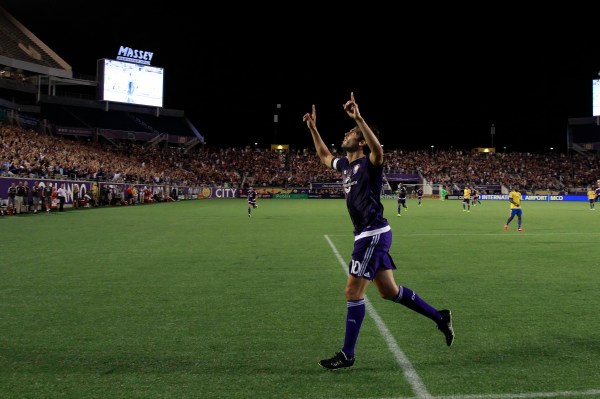 ORLANDO, Fla. — Orlando City SC may have seen their six-game unbeaten streak come to an end last week, but Adrian Heath’s men managed to regain their winning ways in the comfort of their home.

Cyle Larin had the opener, and Kaka closed it, as Orlando City cruised to a 2-0 victory over the Colorado Rapids on Wednesday night at the Citrus Bowl in front of 23,372 in attendance.

After a scoreless first half, Larin tallied the first in the 62nd minute when Carlos Rivas’ cross found the Canadian international to slot the ball past Clint Irwin. Kaka doubled the lead moments later when he blasted a close-range shot past Irwin to cap the game for the Lions.

“We were worthy winners,” Orlando City boss Adrian Heath told reporters about Wednesday night’s win. “Could have been a lot more [goals], and I’m delighted with the evening. Goals change games, and I always worry about the amount of times that we have pressure.

“Once again, we dominated the possession again this evening, but we need to score goals when we have those moments of pressure.”

Kaka had a chance to open the scoring for the Lions before the halftime whistle when Luke Boden’s through ball found Rivas, who fed the Brazilian designated player in the box, but the shot was saved by Clint Irwin.

Brek Shea, who was already playing with a reported groin injury, started and played 38 minutes, which resulted into Rivas substituting in for the U.S. Men’s National Team player.

Larin, who played in his last match before joining the Canadian National Team for the Gold Cup, gave his final thoughts of the game, which kept Orlando City sitting in third place in the Eastern Conference standings.

“I just kept going, and kept working, and it paid off today,” Larin told reporters. “I was just going out there and working, and I get my chances. It’s a process, and if we keep working, we’ll get to the top. Each game I get better and better. When it comes to next half of the season, I know what I have to do, and the goals will continue to come.”

After a lackluster first half from both teams, Orlando City dominated possession for the second 45 minutes, controlling 56.8 percent of the ball throughout the game along with their 20 shots on goal. The Lions almost opened the scoresheet in the 54th minute when Rafael Ramos’s clear-cut pass found Kaka, whose shot hit off the right post.

Pablo Mastroeni’s men found their first scoring chance come in the first 10 minutes of the game when Orlando City defender Sean St. Ledger’s turnover placed Luis Solignac on a one-on-one opportunity against Tally Hall, but the forward failed to capitalize on the chance when the Orlando City goalkeeper denied Solignac with the scoring opportunity.

Orlando City was entering Wednesday’s game after a disappointing 2-0 loss at Saputo Stadium to the hands of the Montreal Impact. Meanwhile, the Rapids entered the game riding a three-game unbeaten streak.

However, with the win, the Lions now head into their second bye-week of the season, but they’ll look to continue their momentum when they welcome the Columbus Crew on Tuesday for U.S. Open Cup play at the Citrus Bowl. The Rapids travel to Sporting Park on Saturday to take on Sporting Kansas City.