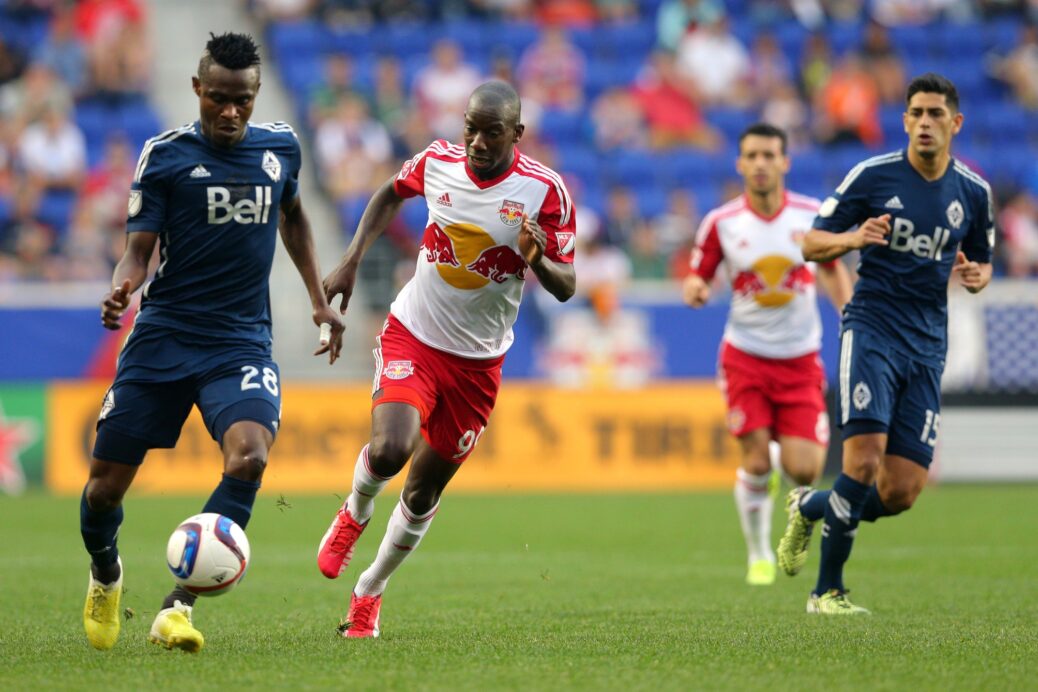 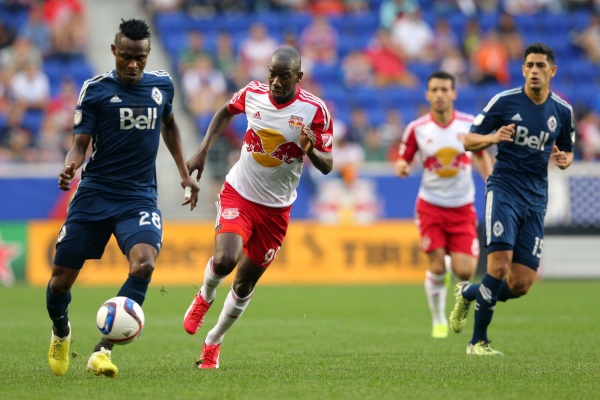 HARRISON, N.J. –The New York Red Bulls nearly walked away from Red Bull Arena with a point on Saturday night, but ultimately couldn’t overcome self-inflicted damage in a 2-1 loss against the Vancouver Whitecaps.

After losing Sacha Kljestan to a red card in the 11th minute and falling behind 2-0, the Red Bulls hopes for any positive result seemed far gone. But a goal from Anatole Bertrand Abang in the 81st minute cut the deficit in half and a flurry of late chances nearly led to an equalizer.

The best of those opportunities came in the 83rd minute, when substitute Manolo Sanchez blasted a low shot from outside the box. But David Ousted managed a diving save on that attempt and also kept out a Dax McCarty header on the ensuing corner, ultimately preserving the Whitecaps’ win.

“It was an incredible night in terms of circumstances, how the game can flip on end so quickly,” Red Bulls head coach Jesse Marsch said. “The biggest positive to take away is that, second half, a man down, the team really pushed hard and we were a little unlucky.”

In the end, the Red Bulls simply couldn’t overcome their own errors.

Things looked promising in the fourth minute, when the Red Bulls earned a penalty kick on a foul by Steve Beitashour. By the 15th minute, however, an Ousted save, Kljestan’s red card and Kekuta Manneh goal had quickly dismantled the early momentum.

As a result, the Red Bulls have now lost four straight MLS matches and have not recorded a league win since beating expansion side New York City FC on May 10.

“Crazy game, but we can’t feel sorry for ourselves,” Marsch said. “Five games, one point. That’s not good enough. Period.”

The unraveling began when Bradley Wright-Phillips was unable to get his first of two penalty attempts past Ousted, who made a diving stop to his right.

In the 11th minute, with the Red Bulls preparing to take a corner, Kljestan was given his marching orders. The midfielder was unhappy when the Whitecaps’ Kendall Waston wrapped him up while making a run, but his retaliatory elbow and backward kick promptly earned a straight red.

With the Red Bulls reduced to 10 men, the Whitecaps wasted no time capitalizing. Having escaped a disastrous miscue just minutes earlier, Beitashour redeemed himself with 15th-minute cross that found the foot of Manneh, who volleyed it past Luis Robles from six yards out.

After the break, the Red Bulls returned to their high-press style and looked threatening, but their efforts only led to Wright-Phillips’ penalty-kick misery being intensified.

The English striker was gifted another chance from the spot in the 64th minute when Abang had his shirt pulled trying to head a cross. But once again, Ousted was equal to the task, this time using his legs to prevent Wright-Phillips’ attempt from hitting the middle of the net.

Thirteen minutes later, the Red Bulls were punished once again.

Kianz Froese, a 19-year-old midfielder, found space on the counter as the Red Bulls pushed to equalize and slotted home his first MLS goal – which proved to be the game-winner – in the 77th minute.

The win pushes Vancouver into a tie atop the Western Conference and Supporter’s Shield standings, though the Seattle Sounders have a game in hand. Their next match – a trip to Gillette Stadium to face the New England Revolution – will be their fourth of five straight on the road while BC Place hosts the Women’s World Cup.

Meanwhile, the sputtering Red Bulls sit in a three-way tie for fifth place in the Eastern Conference and remain narrowly above the red line on goal difference. They’ll return to action on Wednesday night, when Real Salt Lake makes a cross-country visit to Red Bull Arena.

“It certainly feels like right now, that things are going against us,” Marsch said. “But if you dwell on that, that’s being a loser, right? And quite honestly, if we start to feel sorry for ourselves, then we’re going to dig even a bigger hole. So right now, I’m not feeling sorry for myself. I’m ready. I’m ready for this challenge and we’re going to figure out a way to get out of it.”