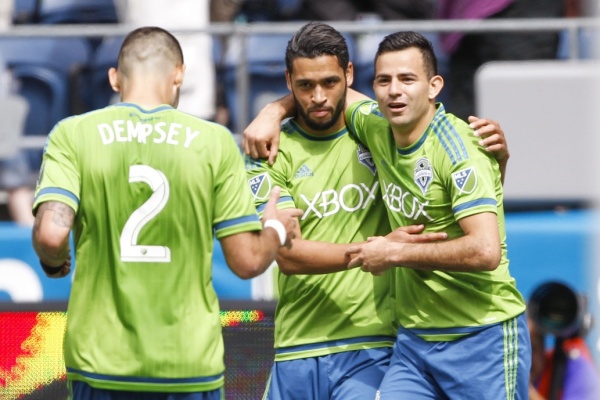 What a week it was for those that occupy the Cascadia region.

The three area teams combined collect a total of 15 points this past week, with both the Sounders and Timbers riding a six-point week. Meanwhile, the Whitcaps took care of business in besting a struggling RSL side, ensuring reason to celebrate, and snarl, in the Pacific Northwest.

Elsewhere, Sporting KC and the Chicago Fire proved to impress, combining for overwhelming defeats of FC Dallas and the Montreal Impact, respectively, to shake up this week’s rankings.

Have a look at the SBI MLS Power Rankings for Week 13 below:

THIS WEEK: at Sporting KC on Saturday

OUTLOOK– Heck of a double-game week for the Sounders, who picked up a pair of victories over teams that have been difficult to crack. As stated last week, the return of Obafemi Martins proved to be just what the Sounders needed on the attacking end. Special kudos to Marco Pappa as well for scoring two big-time goals to lead the Sounders to a six point week.

THIS WEEK: vs. Chicago Fire on Wednesday; vs. Toronto FC on Saturday

OUTLOOK– A bit of a mixed bag for D.C. United, which did well to bounce back and claim a win over the Union after falling to them earlier in May. The schedule continues to come hot and heavy, though, as matches with the Fire and TFC will make it four games in 10 days.

OUTLOOK– Well then. Friday night’s performance from Sporting KC was no joke. SKC absolutely throttled FC Dallas in what turned out to be a total team performance. Benny Feilhaber and Krisztian Nemeth continue to be Sporting KC’s best players, while Friday also yielded a special performance from Graham Zusi. Overall, a scary showing from a Sporting KC side hitting its stride.

THIS WEEK: at Portland Timbers on Saturday

OUTLOOK–  Absent Lee Nguyen and without an injured Jermaine Jones a majority of the game, the Revs did fine in snagging a draw with the LA Galaxy. The buildup to the opening goal was spectacular, as Scott Caldwell continues to shine along with the attacking trio of Teal Bunbury, Charlie Davies and Juan Agudelo. The questions now lie with Jones, as any new injury issues could put a major damper on the Revs heading into the summer months.

THIS WEEK: at Houston Dynamo

OUTLOOK– The Red Bulls could probably use this upcoming bye week after suffering back-to-back losses to the Union and Sounders. While a loss to the Sounders is normally far from concerning, Jesse Marsch and co. need to be a little bit worried given the nature of the defeat.

THIS WEEK: at Montreal Impact on Wednesday; at LA Galaxy on Saturday

OUTLOOK– Following a two-game slide, a defeat of Real Salt Lake is just what the doctor ordered for the Whitecaps. The emergence of Christian Techera is surely a welcome one for the Whitecaps, as the diminutive forward’s finish snagged some major points for a team still in the Supporters’ Shield hunt.

OUTLOOK– Four points is a solid haul for a Galaxy side that has been struggling as of late. Once again without Robbie Keane, the Galaxy did well to score the goals required to get two positive results. In particular Ignacio Maganto did well, as the rookie’s goal against the Revs was one for the highlight reel.

OUTLOOK– Doomed by a Zach Lloyd red card in an absolutely horrific loss to Sporting KC, FC Dallas are now winless in three. Friday’s performance especially was a bit of a red flag, especially coming after a disappointing effort against the Impact the week prior. FC Dallas is now beginning to fall towards the pack after one of the league’s hottest starts.

THIS WEEK: at D.C. United on on Saturday

OUTLOOK– Sebastian Giovinco is stepping up big time in the absence of Jozy Altidore, as the Italian star continues to pull the strings with both his playmaking and goalscoring. However, perhaps more important was Saturday’s efforts from the teams less-heralded players, with Justin Morrow, Warren Creavalle and Luke Moore providing goals in an impressive TFC victory.

THIS WEEK: at Philadelphia Union on Wednesday; vs. Montreal Impact on Friday

OUTLOOK: Undone by a questionable ejection of Michael Parkhurst, a point is a fair result for the Crew’s trip to the Citrus Bowl. While Parkhurst’s dismissal put a damper on things, the Crew remain firmly entrenched in the Eastern Conference hunt. The questions till remains if, and when, the Crew will take that next step into the contenders that many expect them to be, but until then, let the Wil Trapp waiting game continue.

THIS WEEK: vs. New York Red Bulls on Friday

OUTLOOK–  At this point, getting just a point from NYCFC is somewhat of a disappointment, especially after the Dynamo had an early lead. Regardless of the result, Will Bruin remains hot, a major positive, and the Dynamo remain right in the thick of things out west.

THIS WEEK: vs. FC Dallas on Sunday

OUTLOOK– The Earthquakes were absolutely swarmed by an aggressive TFC team, and were certainly the second best team on the field last Saturday. Still, the Quakes remain firmly in the Western Conference playoff picture, but a little consistency would go a long way for a team that has struggled to put together back-to-backs good performances this season.

OUTLOOK– Now, those are performances worthy of a team looking to remain in the playoff hunt. The Timbers needed to snag some points, and they grabbed all six in an impressive double-game week. Now with three wins in five, the Timbers are back where they should be, but need to continue to push on to vault over the pack in the West.

THIS WEEK: at D.C. United on Wednesday; vs. Orlando City on Saturday

OUTLOOK– Riding two straight draws, the Fire brought the hammer down on the Impact on Saturday. Particularly impressive was Kennedy Igboananike, whose hustle and effort was rewarded with the Fire’s third goal. If Igboananike can start clicking, look for him to join would could be a fearsome attacking unit as the team starts to click after a busy offseason.

OUTLOOK– Orlando City just doesn’t do things the boring way. Led by an 89th minute equalizer from Pedro Ribeiro, the Lions snagged yet another point from nothing by taking full advantage of a questionable Michael Parkhurst red card. Right in the thick of things in the east, this season has been a fun one for Orlando City. Now the challenge lies in making it a winning one.

THIS WEEK: at Colorado Rapids on Sunday

OUTLOOK– Rough, rough week for RSL. Dropping two contests against fellow Western Conference contenders, RSL are in severe danger of falling out of the pack of contenders. It’s way too early to be hitting the panic button, but one has to wonder exactly where RSL fit in the grand scheme of things with where they stand so far.

OUTLOOK– After picking up a statement win over the Whitecaps the week prior, the Rapids were humbled by Cascasdia’s other two outfits. The Rapids are in an interesting spot. Looking at results, they’ve been competitive and have avoided plenty of losses. However, on points, the Rapids are starting to fall out. Avoiding losses can’t be the goal anymore, as the Rapids need to start collecting maximum points to hang around in the crowded West.

THIS WEEK: vs. Vancouver Whitecaps on Wednesday; at Columbus Crew on Saturday

OUTLOOK– After getting some positive results in recent weeks, the Impact fell flat on their faces against the Fire. While it’s far from a result that was desired, the Impact do have time on their side with at least three games in hand on everyone else in the Eastern Conference.

THIS WEEK: vs. Columbus Crew on Wednesday; vs. NYCFC on Saturday

OUTLOOK– On the heels of back-to-back wins, the Union crashed down to earth in a 2-1 loss to a D.C. United that they defeated just two weeks back. On paper, a loss to D.C. United isn’t too bad given their current standing, but Saturday’s contest could have been a major statement for the Union. A bit of a chance wasted, but still plenty of time to battle back with a double-game week on the horizon.

OUTLOOK– Battling back from an early deficit, a draw with the Dynamo was a fair result. Still, with the lone goal coming via a penalty kick, NYCFC is still struggling to score from open play. With just 10 goals this season, the scoring needs to come from somewhere if NYCFC are hoping to emerge from this hole that they’ve dug in the early season.