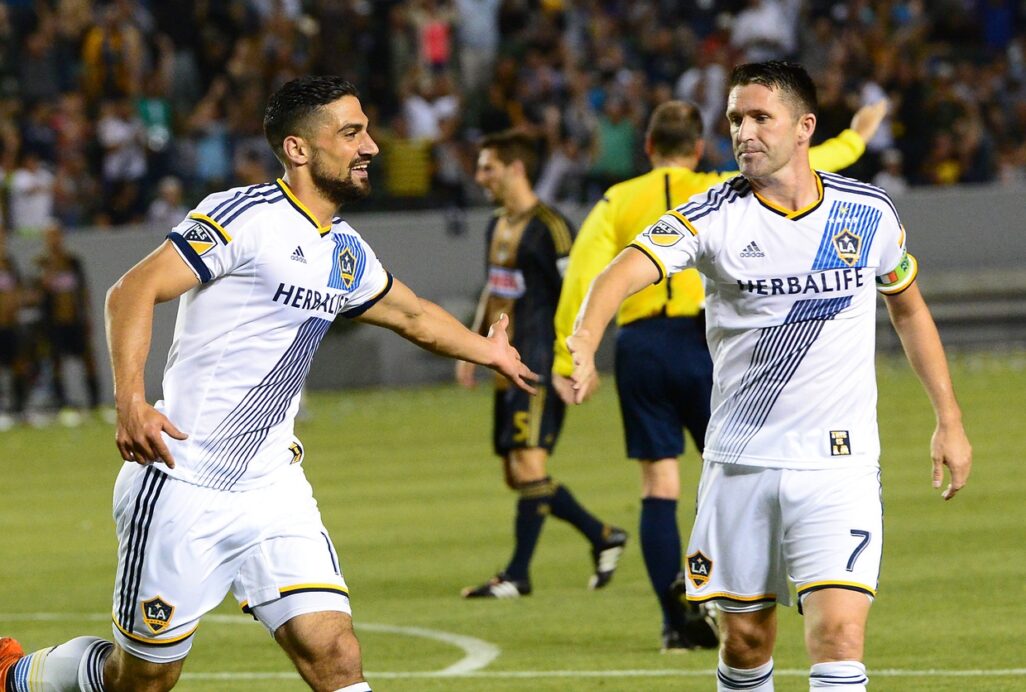 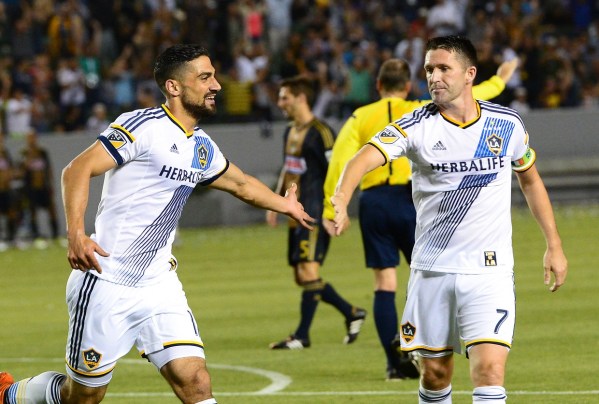 In the East, New York City FC continued the club’s unbeaten run by traveling north of the border and taking down a full-strength Toronto FC. Out West, the San Jose Earthquakes took it to an admittedly weakened Seattle Sounders team to climb back into the playoff picture.

Meanwhile, the LA Galaxy made what might have been the week’s biggest statement, thumping the Philadelphia Union, 5-1, to reassert themselves as contenders in this week’s Power Rankings.

Have a look at the SBI MLS Power Rankings for Week 16 below:

THIS WEEK: at Chicago Fire on Wednesday; at Toronto FC on Saturday

OUTLOOK– Down a goal in the second half, D.C. United once again demonstrated the team’s trademark resiliency in taking down the Revs via a Chris Rolfe brace. It’s hard to doubt D.C.’s candidacy as best the East has to offer, as the team has certainly lived up to the expectations laid forth by last year’s rise.

THIS WEEK: at Philadelphia Union on Wednesday; at Portland Timbers on Sunday

OUTLOOK– Without both Clint Dempsey and Obafemi Martins, it was far from surprising to see the Sounders have a dud of a performance against the Earthquakes. With both absent for at least two more games, the Sounders will need to find that option going forward, and Saturday’s matchup with the lowly Union might just be the perfect opponent to do so.

THIS WEEK: At New England Revolution on Saturday

OUTLOOK– Once again, David Ousted came up huge for the Whitecaps, stopping a pair of penalty kicks to lock up a tough road win at Red Bull Arena while becoming only the third goalkeeper in MLS history to stop two spot kicks in one match. Riding Ousted’s hot hand, the Whitecaps are dangerous, as this year’s team has the attack to match the stability of the always-stout backline.

OUTLOOK– Entering riding a seven-game unbeaten run, Sporting KC finally slumped to a disappointing defeat Sunday at Rio Tinto Stadium. A disappointing rivalry loss, sure, but Sporting KC can surely overcome the loss after really asserting themselves as a force in the last month and a half.

THIS WEEK: vs. Columbus Crew on Saturday; vs. Vancouver Whitecaps on Saturday

OUTLOOK–  Disappointing loss for the Revs, who blew a one-goal lead in a game that would have catapulted them right back towards the top of the Eastern Conference. With just one win in eight, the Revs are just a totally different team without Jermaine Jones, something that will need to be addressed as the midfielder continues his spell on the sidelines.

THIS WEEK: vs. Portland Timbers on Wednesday; at San Jose Earthquakes on Saturday

OUTLOOK– The Union proved to be an absolute cakewalk for the Galaxy, who impressed in both the league and U.S. Open Cup play this week. Once again looking dynamic, the Galaxy are scoring at will with acquisition Sebastian Lletget proving to be a welcome addition to the Galaxy lineup.

THIS WEEK: at LA Galaxy on Wednesday; vs. Seattle Sounders on Sunday

OUTLOOK– Don’t look now, but the Timbers have won four straight to complete a massive ascendance up the Western Conference table. Caleb Porter’s side has turned around in impressive fashion and developed into a real threat out West. However, the team’s biggest test come this week in matchups against a pair of contenders in the Galaxy and Sounders.

OUTLOOK– For the second time this season, the San Jose Earthquakes took on the Seattle Sounders and emerged victorious, an impressive feat no matter the opposing lineup. The win keeps the Earthquakes in the conversation out West, but the task gets even tougher this weekend against the Galaxy.

OUTLOOK– Winless in the team’s five-game roadtrip, FC Dallas has fallen all the way to sixth in the Western Conference. Goals have been nearly impossible to come by in recent weeks with just two in six games, a disturbing stat for a team that was looking like a Western Conference contender just over a month ago.

OUTLOOK– What a difference a month makes. NYCFC is now riding a three-game winning streak and now sits level on points with the Red Bulls, Sunday’s opposition. Things are looking up for NYCFC, who have asserted themselves right back into the playoff picture approaching what will likely be a busy summer transfer window.

THIS WEEK: At Toronto FC on Wednesday; at Philadelphia Union on Saturday

OUTLOOK– Following their CONCACAF Champions League success, the Impact have jumped into MLS play and climbed right up the Eastern Conference table. Saturday’s win over Orlando City sees the Impact climb up to fifth in the conference despite having games in hand, as the Impact continue to look more and more for real.

THIS WEEK: vs. Montreal Impact on Wednesday; vs. D.C. United on Saturday

OUTLOOK– Frustrating for Toronto FC, who were forced to settle for a loss in a game that saw all three of its stars take the field in some fashion. Still, it’s been a big month and the returns of Jozy Altidore and Michael Bradley should be a big help in the games leading up to their Gold Cup departures.

THIS WEEK: vs. Colorado Rapids on Wednesday

OUTLOOK– Another week of highs and lows for Orlando City, as the team followed an hard-fought U.S. Open Cup victory over the Charleston Battery with a defeat to the Impact. Still, all the way up to third in the East, Orlando City remains a playoff contender and continues to have an impressive season for a first-year MLS team.

THIS WEEK: at NYCFC on Sunday

OUTLOOK– The Red Bulls appear to be in full-on free fall mode and have picked up only one win since April. That win, coincidentally, came against their rivals, NYCFC, the same team they face-off with this weekend in a game that gives the Red Bulls a major opportunity to turn their season around.

THIS WEEK: at FC Dallas on Friday

OUTLOOK– The Dynamo just can’t seem to put a consistent string of results together, in any direction, as the team continues to tread water just outside the playoff picture. Following a loss to the Timbers, the Dynamo have a chance to regain some ground in what will be a crucial Texas Derby.

THIS WEEK: vs. New England Revolution on Wednesday; at Real Salt Lake on Saturday

OUTLOOK: Following a U.S. Open Cup win, the free weekend was a welcome one for the Crew. Winless in six, the cavalry should be arriving soon in the form of Wil Trapp, giving the Crew a major presence in the midfield once again.

OUTLOOK– Javier Morales continues to be the key man for RSL, picking up two more assists in this past weekend’s win. However, RSL still sits on the outside of the playoff picture and will need to start picking up consistent results to climb back up the table.

THIS WEEK: vs. D.C. United on Wednesday

OUTLOOK– The midweek win over Louisville City in the U.S. Open Cup will serve as a nice confidence boost, but the Fire really need to get something going in MLS play. Riding three straight losses, the Fire face a tough task in turning that around against a D.C. United team that knocked them off  on June 3.

THIS WEEK: At Orlando City on Wednesday; at Sporting KC on Saturday

OUTLOOK– Surprise, surprise. Another week another draw for the Rapids, a team that now has 15 points from as many games. Most impressive was Dillon Serna, whose late equalizer put an exclamation point on an impressive performance, one that could be built upon in the form of much-needed wins.

THIS WEEK: vs. Seattle Sounders on Wednesday; vs. Montreal Impact on Saturday

OUTLOOK– Absolutely thumped by the LA Galaxy, the Union once again look like a bad team. No matter the opposition, losing 5-1 is unacceptable, especially with three of those goals coming in a nine minute span. The Union’s struggles continue, as the team continues to sink towards the bottom of the conference.