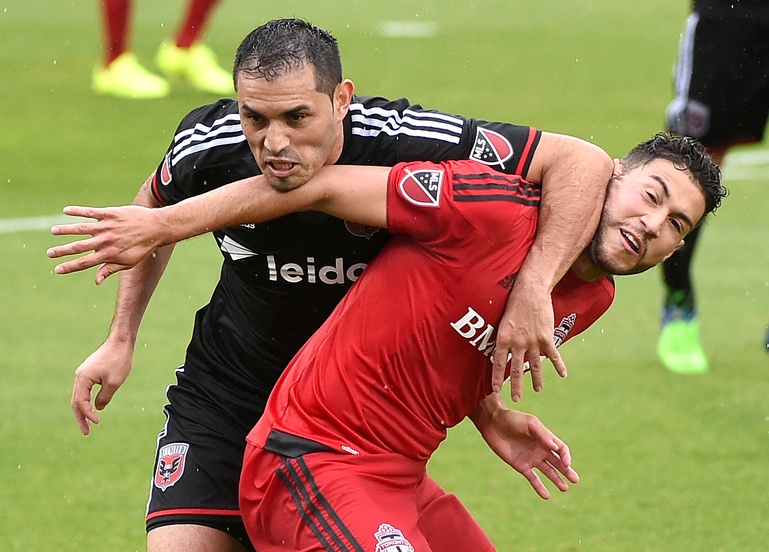 Two of the Eastern Conference’s best met at BMO Field on a rainy and windy Saturday, and while Toronto FC gave D.C. United fits all evening, neither could find the breakthrough in a scoreless draw.

Toronto was on the offensive a majority of the first and second half, as D.C. United was content with absorbing the pressure being made by Toronto’s dynamic trio of stars.

The Reds were unable to make a move up the table to catch D.C. United, who currently leads the Eastern Conference, and with the 2015 Gold Cup starting, TFC may rue its missed opportunities even more, as important pieces like Michael Bradley, Jozy Altidore and Jonathan Osorio are set to leave the club to compete at the international stage.

The first real chance came in the 28th minute when Sebastian Giovinco kept the ball in near the end line, cut in toward goal and picked out Altidore in the middle of the box, but the U.S. Men’s National Team forward couldn’t put his header on frame.

Against the run of play in the 33rd minute, Luis Silva blasted a shot from just outside the top of the penalty area, and Toronto goalkeeper Chris Konopka quickly dove to his right to save D.C.’s first chance on the day.

In the 38th minute, Osorio had a wonderful chance to give the hosts the lead, but his rolling effort went just wide of the post, much to the delight of Bill Hamid, who couldn’t reach the shot attempt.

TFC kept the pressure on in the second half, and in the 63rd minute, Giovinco came close to breaking the deadlock after working his way inside the box, but his blast sailed over the bar. In the 67th minute, it was he, again, who attempted a strike, this time from the right, but Hamid dove to his right to save the low shot.

Giovinco didn’t stop trying, and he attacked from the right once more in the 76th minute, but the shots just weren’t hitting the back of the net for the Italy international.

And D.C. United remained strong until the final whistle blew.

Toronto FC will head on the road next Saturday, as it plays the Los Angeles Galaxy. Meanwhile, D.C. United meets Philadelphia at PPL Park on Tuesday.