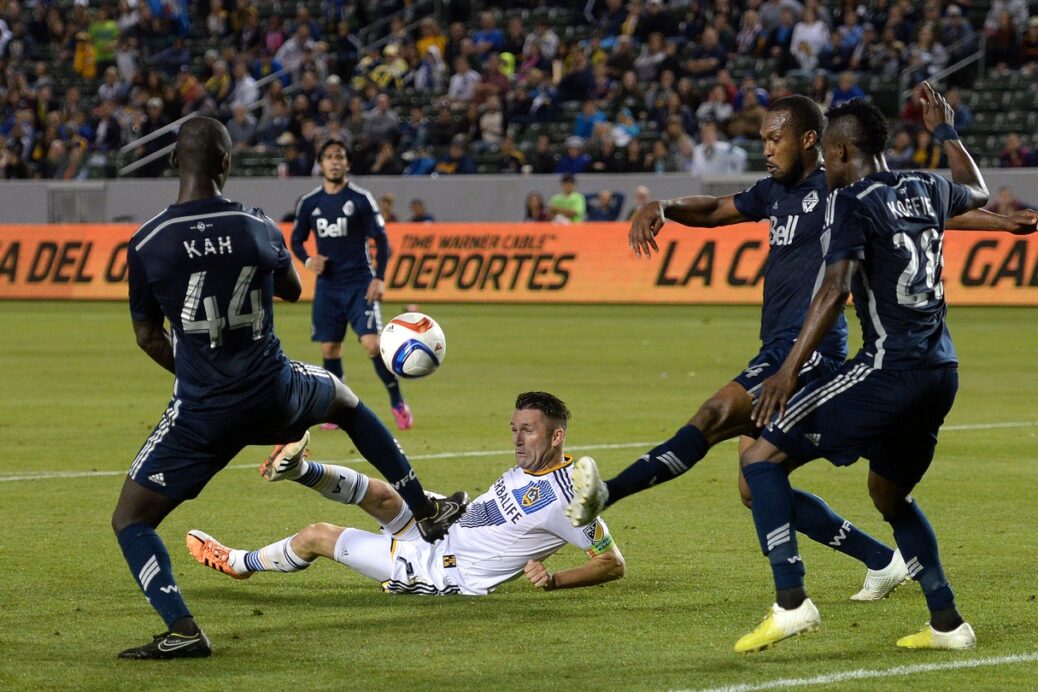 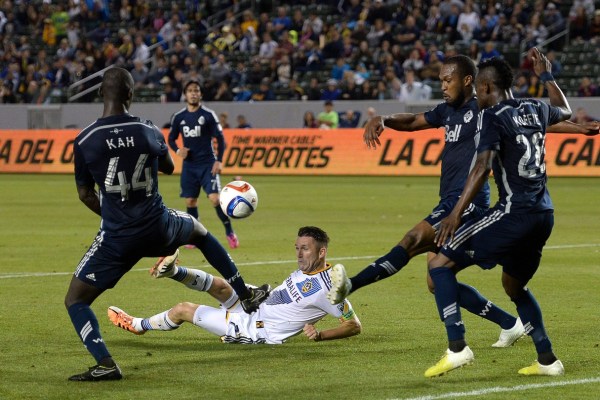 CARSON Calif.– The Vancouver Whitecaps at last rewrote the script against perennial nemesis the LA Galaxy, knocking off the defending champions in Los Angeles for the first time ever, 1-0, on a Kekuta Manneh strike in the 32nd minute.

Manneh intercepted a lazy switch pass by Galaxy central midfielder Mika Vayrynen and was off to the races. He played a long wall pass to Octavio Rivero, received the ball back from Rivero at a dead run thirty yards from goal, and found himself one on one with Galaxy center back Omar Gonzalez. While Gonzalez matched Manneh’s pace, Manneh cut inside on Gonzalez just inside the penalty area and created ample space to challenge and beat LA backup goalkeeper Brian Rowe to the near post. The goal was only the second the Whitecaps have ever scored in Los Angeles against the Galaxy.

“They played well” said Galaxy head coach Bruce Arena after the match. “They’re very good in the air.  They dominated us there, and we weren’t good enough on the ball to play around them.”

The result ended another long-running story.  The LA Galaxy had not lost at home in twenty three games, the third longest streak in the history of the MLS.  Tonight the Galaxy defense was exposed repeatedly, especially by Manneh’s pace.

“The first two times, I know he likes to cut inside, so I made sure to take him outside and close down the angle.” said Gonzalez, discussing Manneh’s repeated runs at the Galaxy center back. “But the third time, he was more central, so I was vulnerable to both sides, and I allowed him to come inside more, and that’s how he was able to get his shot.”

Vancouver played an extremely compact formation throughout the evening, with both fullbacks refusing to get drawn out, and with not one but two center midfielders, Matias Laba and Gershon Koffie, parked directly in front of their large center backs, Kendal Watson and Pa Modou Kah.

“They had a game plan to stop balls going through the middle, and they defended well” said Galaxy team captain Robbie Keane, who will leave tomorrow for international duty in European qualifiers for his native Ireland. “Full credit to them, they deserved to win the game.”

The goal put wind in the Whitecap’s sails, and by the second half, they were the aggressor.

With the Galaxy defenders pushing higher and higher to try to find the equalizer, twice Vancouver attackers found themselves in behind the Galaxy back line, and twice they failed to  increase the Whitecap’s lead.  On the first, Cristian Techera laid the ball off to midfielder Pedro Morales, who hit the post, the second time the Whitecaps had done so on the evening; on the second breakaway, striker Rivero simply missed teammate Darren Mattocks entirely.

“The reason why they got so many counterattacks late, in the second half, is because we’re just going for broke,” continued the Galaxy’s Gonzalez. “We wanted to tie the game. We have to take chances.  We kept on taking chances, by sending players forward, but we kept on losing the ball, but we kept on coughing it up, and they just kept on going on counters.”

The Galaxy, meanwhile, drop to 5-5-6, good for twenty one points and fifth place in conference.  Tonight marked only the third time in club history they were held without a shot on goal, the last being in Kansas City in April of 2013.

“No excuses, but we’re a little bit shorthanded in a lot of spots on the field, and it showed with some of our quality” continued Arena. “It takes away from our effectiveness.”

The Galaxy now travel to Columbus next weekend for a showdown with the struggling Crew.  The Whitecaps will get a week off before logging more air miles, as they travel next to New Jersey to take on the Red Bulls on June 20th.