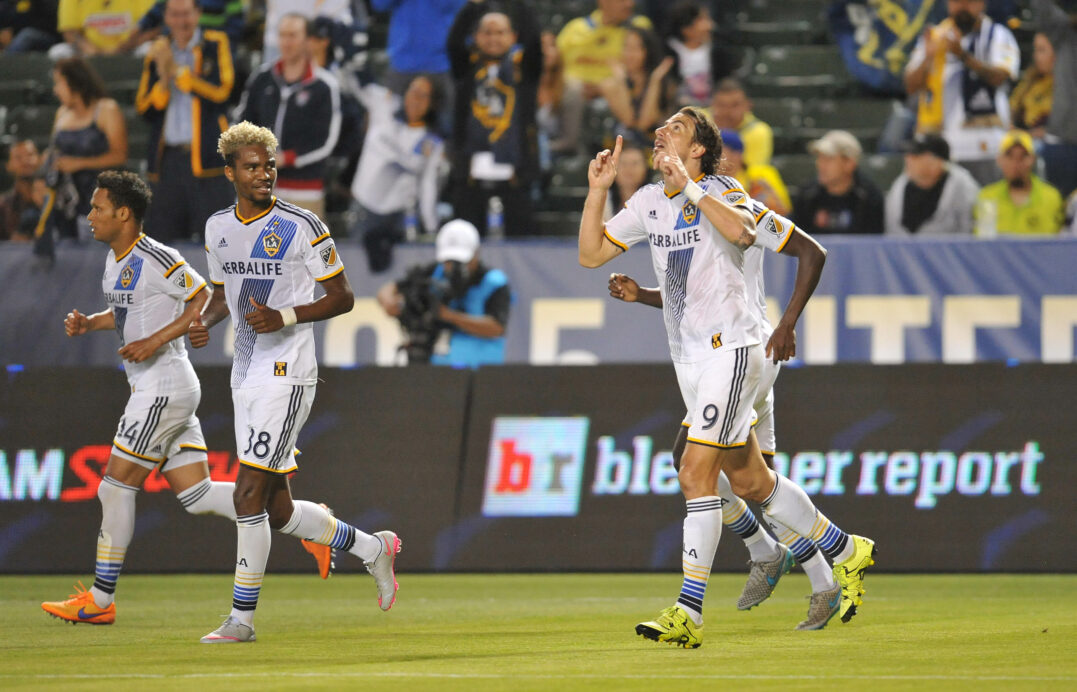 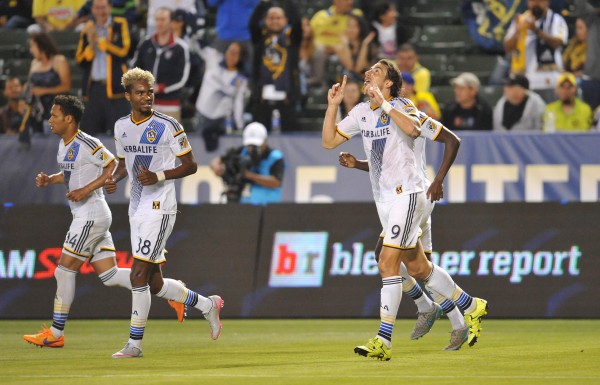 After withstanding a frenetic attack from Club América in the first fifteen minutes, the Los Angeles Galaxy gained control of the match, and then the scoreboard, defeating the Mexican club, 2-1, at StubHub Center.

Based on crowd presence, it seemed the opening match of the International Champions Cup tournament was a home game for legendary Mexican side Club América, despite being played in Los Angeles. And with LA Galaxy head coach Bruce Arena’s twenty-two man lineup, it hardly seemed the Galaxy were motivated for much more than a summer friendly payday.

However, after going down early, Robbie Keane evened the score in the 44th minute, and then Alan Gordon broke open the deadlock in the 80th to give the Galaxy home faithful – however small in number – a worthy triumph over the vaunted Mexican giants.

Keane’s goal was one for the highlight reel.  The Irish international raced toward the América goal and hauled in a 50-yard pass from Juninho, touching the ball deftly out of the air and redirecting the ball so effectively that both the América defender marking him, and the América goalkeeper coming forward into the play, were instantly sent sprawling to the turf.

Keane then pivoted and easily tapped the ball into the back of the net in front of the massive América supporter section.  The goal instantly sucked the air out of the yellow-clad América faithful and seemed to take the wind entirely out of the Las Aguilas players as well.

America opened play with a ferocity that caught the Galaxy flat-footed.  The Azulcremas displayed pace and technical ability the Galaxy almost never see in MLS play, and when Darwin Quintero squirted in behind the Galaxy back four and nutmegged goalkeeper Brian Rowe, it seemed the Galaxy might be in for a long and deafening night.

However, the Galaxy had a new weapon to call upon to bring composure to the middle of the pitch: the widely heralded debut of Liverpool legend Steven Gerrard.  While Gerrard, like the rest of the Galaxy, looked caught out by the Club América tenacity early on, slowly Gerrard and his new midfield partner, Juninho, began to wrest control of the match.

“It was a great feeling.  It was a difficult game and I thought they (Club América) were very good” said Gerrard after the match.  “I thought after 15 or 20 minutes that the team settled really well, we played some good football, and we got our deserved equalizer.  For me personally, it was good to get 45 minutes under my belt, and I’ll keep getting better and better, and the more I get used to my teammates, I’ll improve.”

With the Galaxy facing an extremely heavy schedule – with two more matches in the next five days – Arena pulled into the deepest reaches of his roster and fielded an entirely different eleven to start the second half.  Three of the substitutes made their debut with the senior team, and only two – veteran forwards Alan Gordon and Edson Buddle – see regular time with the Galaxy.

Club América, on the other hand, left it’s entire starting lineup on the field for almost the next half hour of play, but the expected onslaught of goals by talented Mexican senior players against green MLS reserves never emerged.  Rather, it was the Galaxy that put América on the back foot, generating multiple chances in the first thirty minutes of the second half, while an increasingly frustrated América side stopped generating chances on goal and began hacking at Galaxy legs instead.

So when Alan Gordon scored the go-ahead goal for the Galaxy in the 80th minute, it was by no means against the run of play.  Kenny Walker sent Raul Mendiola a perfectly weighted long ball down the Galaxy’s right flank.  Mendiola corralled the ball just short of the end line, a crossed a long bending ball to the far post, where Alan Gordon lurked.  Gordon used his physical size to out leap and out muscle two América defenders, and chipped a header back across the goal mouth and over the outstretched arms of América goalkeeper Hugo Gonzalez.

The looping strike thoroughly wrong-footed the goalkeeper, and he helplessly watched as the ball clanged off the post and into the back of the goal.

“It was fun” said Alan Gordon, whose last minute heroics have become something of a routine story for the Galaxy this season. “It was kind of a hostile crowd in our own stadium, which is never a great feeling.  But to come away with a win and give our supporters that were here supporting us bragging rights is important.”

The Galaxy reserves were left to face a ten-minute onslaught from a now thoroughly distraught América side.  Rookie goalkeeper Andrew Wolverton made a diving save on a Michael Arroyo free kick, but it would be the only on-target attempt América would manage in the second half.

“In the second half, our young players played with a lot of confidence, played hard” continued Arena, when asked about his reserves’ performance. “I think the way they closed the game out and preserved the three points was excellent.”

Both sides will play four matches in total as part of the International Champions Cup. Club América will play in San Jose against the Earthquakes on Tuesday before taking on Manchester United in Seattle on Friday.  But for Los Millonetas, these games are all a tuneup before the start of the 2015 Apertura in August.

The Galaxy, meanwhile, are in the heart of several different competitions.  They will travel to Salt Lake City on Tuesday to take on Real Salt Lake in a U.S Open Cup quarterfinal, then return to Los Angeles to host San Jose in another installment of the California Clasico on Friday night, before finally heading fifteen miles north to the Rose Bowl to take on no less a power than UEFA Champion’s League winner F.C. Barçelona in their second I.C.C. match.