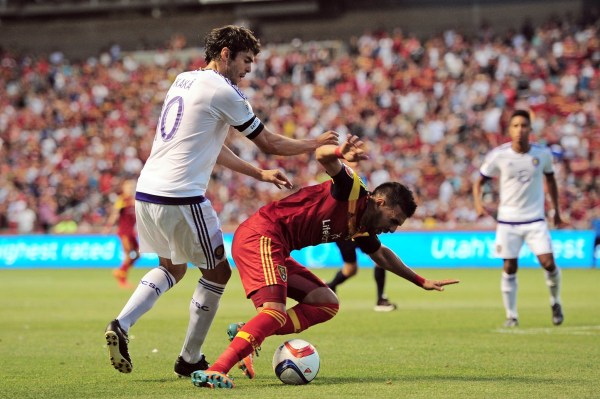 When Orlando City star Kaka scored a beautiful goal on Saturday night, it didn’t exactly come as a surprise. It was the red card that ended his night that was the far more surprising development in Orlando City’s visit to Utah.

Orlando City and Real Salt Lake played to a 1-1 draw at Rio Tinto Stadium, but it was Kaka’s controversial ejection that drew more headlines than either of the actual goals scored.

Referee Storin Stoica sent Kaka to an early shower in the 45th minute after a hard challenge on RSL midfielder Javier Morales that sent Morales crashing to the turf. Kaka’s momentum forced him to step on Morales as he stumbled, which Stoica apparently deemed worthy of a red card, the second straight red card of Kaka’s professional club career, and first in a dozen years.

Orlando City managed to avoid defeat despite playing down a man for the entire second half, earning a previous road point that keeps the club with just one loss in eight matches.

RSL nearly opened the scoring just four minutes in when Olmes Garcia sent a low shot from close range toward goal only to have Orlando City’s Tally Hall stretch low to tip it away from danger.

Orlando City responded just 30 seconds later after a quality passing sequence concluded with Pedro Ribeiro slipping a pass to Kaka, who sent his curling shot past Jeff Attinella for the opening goal, his ninth of the season.

RSL equalized in the 28th minute when Sebastian Jaime forced a powerful header past Hall. He elevated to finish off a perfect cross from Tony Beltran to give him goals in four straight matches.

Both teams had their chances in the second half, but couldn’t find the net. Sean St. Ledger had a header saved well by Attinella, while Sebastian Saucedo saw his far-post blast from distance tipped away by Hall in the 84h minute.

The draw leaves RSL winless in three straight matches, with a trip to Colorado up next on Saturday. Orlando City returns to action on Saturday, at home against FC Dallas.