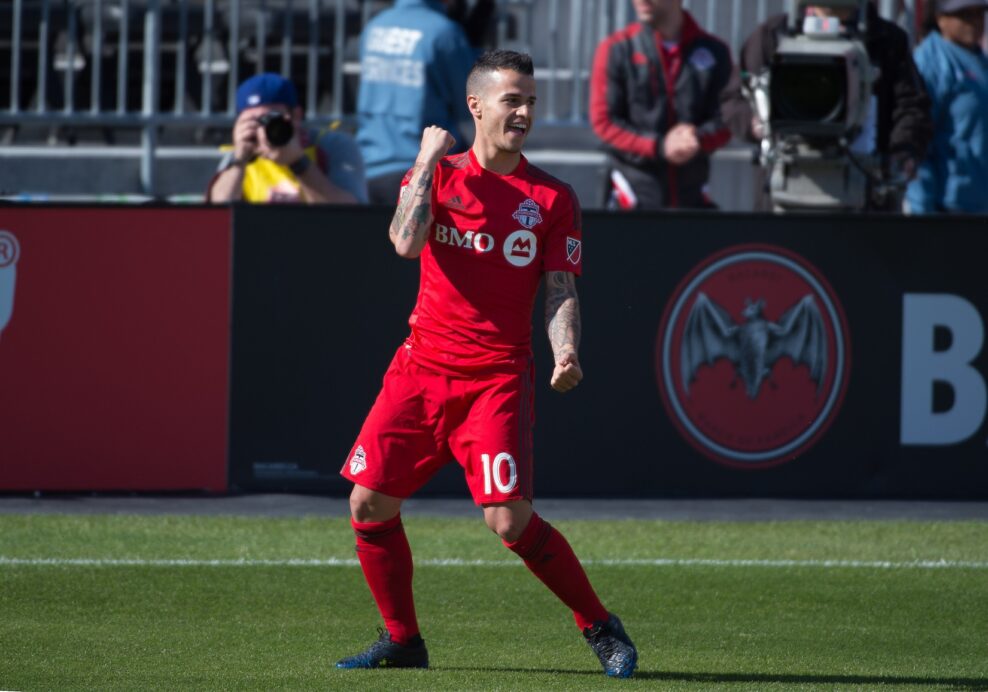 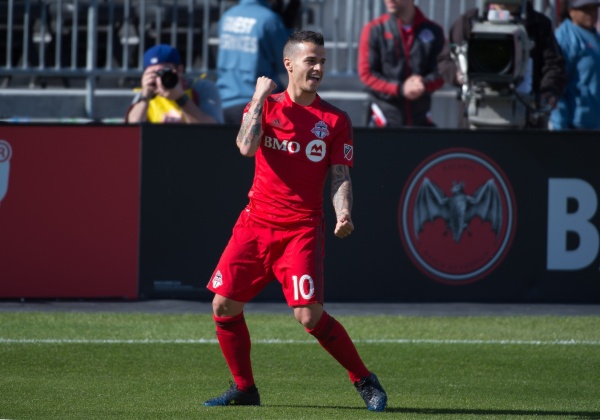 Sebastian Giovinco turned Superman to provide his side with a first-half hat-trick, but it wouldn’t be enough to earn Toronto FC all three points at Yankee Stadium.

The Italian provided a trio of goals in the first half to lead a two-goal comeback for TFC, but Patrick Mullins doomed the visitors to just one point to earn his team a 4-4 draw.

Just moments after seeing Marky Delgado give TFC the lead, Mullins provided the leveler in the 84th minute, heading home from close range for NYCFC’s fourth goal of the game. The NYCFC forward’s equalizer put a damper on a spectacular performance from Giovinco, who netted a hat-trick and assisted the fourth to push TFC out of a two-goal deficit and into the lead.

Taking just nine minutes between goals, Giovinco’s hat-trick registers as the third-fastest in MLS history. The record is currently held by Harutyun Karapetyan with a five-minute effort for the LA Galaxy in 1998.

Down two goals heading into the 34th minute, Toronto FC looked destined to settle for the team’s second loss to NYCFC in less than a month. But then Sebastian Giovinco decided to take over.

Just five minutes after surrendering TFC’s second goal of the night, Giovinco cut the lead to one in the 34th minute, atoning for a missed penalty of his own that caromed off the post 16 minutes prior.

Given another opportunity from the spot, Giovinco opted to go the same way, but to a much different result, as the shot tucked into the left-hand side-netting to kickstart the TFC comeback.

Giovinco struck yet again just six minutes later, dashing through the NYCFC defense for his second of the game and 10th of the season. Spurred on by a backheel pass from Jackson, Giovinco fought off a defender as he dashed in alone on goal, firing past Saunders for his second goal of the game.

The third came just three minutes later, as Giovinco chipped a shot up and over Saunders for his first-half hat-trick, the first in the history of Toronto FC, while giving his side a 3-2 lead. Giovinco’s  hat-trick takes him to 11 goals through the first 17 games of MLS play.

Giovinco’s trio of goals completed a remarkable comeback, as NYCFC proved dominant in the lead-up to the Italian’s flurry, even in the absence of the injured Frank Lampard, who was scheduled to make his debut before being ruled out midweek.

Just moments after missing a sitter in front of net, Villa atoned by smashing home a beautiful free kick in the 17th minute for his ninth goal of the season, including seven in seven games, to give NYCFC the early lead.

Stationed on the dead ball toward the left side, Villa took advantage of space created within the wall. Curling a free kick up and over, Villa’s effort hit the hands of goalkeeper Chris Konopka, but the pace of the shot carried the ball over the line to give NYCFC the 1-0 lead.

That lead was doubled in the 29th minute, as NYCFC took advantage of more calamity in the TFC backline to force an own goal.

After seeing a penalty called on defender Damien Perquis, Villa’s effort was saved by Konopka with Patrick Mullins darting in to possess the rebound. Mullins proceeded to bank a cross off Perquis and into the back of the net, doubling the lead through a fortuitous own goal.

That lead evaporated against the heroics of Giovinco, but it was a fellow international superstar in Villa who nearly laughed last, providing a second-half penalty kick to level the scoreline.

Villa added his second goal of the day and eighth in seven games in the 65th minute, burying his second penalty kick attempt of the evening to level the scoreline at three. The goal was Villa’s 10th goal of the season, including braces in three of the past four matches.

The Spaniard’s goal proved to be just the start of a series of late-game chaos, as Delgado smashed home a Giovinco assist in the 82nd minute, just two minutes before Mullins proved hero by earning NYCFC a share of the points.

Following the draw, NYCFC returns to action Saturday with a trip to visit the New England Revolution, while Toronto FC hosts the Philadelphia Union that same day.