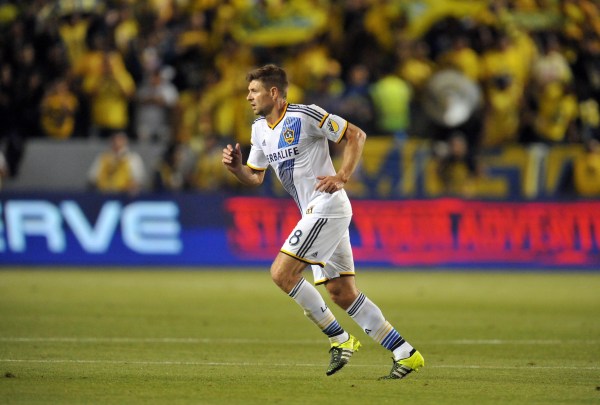 Having previously collided twice this month, the LA Galaxy and San Jose Earthquakes are set for another California Classico, and this one will feature Steven Gerrard.

The two California sides will meet for the third time this weekend, joining a Cascadia clash between the Portland Timbers and Vancouver Whitecaps as rivalry contests taking center stage this weekend.

Derbies won’t be the only interesting matchups on the docket, though, as an inter-conference clash between FC Dallas and D.C United will likely present a contrast of styles between top contenders.

Having split the season series to this point, the Earthquakes can make up some major ground on the Galaxy when the California rivals at StubHub Center Friday night.

Currently sitting just six points behind the Galaxy with three games in hand, the Quakes are just outside the playoff places, but will once again be without star forward Chris Wondolowski due to Gold Cup duties.

The Galaxy will see Steven Gerrard for his MLS debut, reuniting with with a healthy Robbie Keane. That strike force will have be enough to help the Galaxy cope with the international absences of Gyasi Zardes  Omar Gonzalez, Alan Gordon and Jaime Penedo.

After playing to a 4-4 thriller with NYCFC last week, Toronto FC is now tasked with taking on a Philadelphia Union side that is rounding into form.

The Union are unbeaten in the team’s last three contests with two victories as the team continues to climb out of the basement of the Eastern Conference and into the playoff picture. Also in that picture is TFC, a team that saw Sebastian Giovinco net three times last week against NYCFC. Adding to TFC’s firepower may be the return of Jozy Altidore, who could feature after leaving the U.S. Men’s National Team ahead of the Gold Cup quarterfinals.

Winners of three of four, the New York Red Bulls can put some distance between themselves and Orlando City with a victory this weekend.

The Red Bulls currently sit just two points ahead of this weekend’s opposition in the standings while also maintaining a game in hand. Saddled with a depleted backline, the Red Bulls will see depth restored with the return of Karl Ouimette from the Gold Cup, while Cyle Larin will rejoin the Lions from the same Canada side.

In addition, the Red Bulls will be without fullbacks Kemar Lawrence and Roy Miller due to international duty, as both Jamaica and Costa Rica continue into the Gold Cup knockout rounds.

Throttled by the New York Red Bulls last week, the New England Revolution will need to show major improvements this time out against the Red Bulls’ cross-river rivals.

Riding an electrifying 4-4 draw that saw the team’s defense completely collapse under the pressure of Sebastian Giovinco, NYCFC will face a bit of a respite this weekend against a Revs side that has scored just four times in five games. However, it appears that the team’s midfield will once again be weakened as Frank Lampard looks unlikely to make his debut this weekend.

Entering as one of the league’s hottest teams, Sporting KC faces off with a Montreal Impact side that looked as dangerous as ever last time out.

Riding a Dominic Oduro brace and a Marco Donadel thunderbolt, the Impact thrashed the Crew, 3-0, last time out to put an end to a three-game winless run. Taking down Sporting KC will be another animal, though, despite the international absence of Graham Zusi.

Saturday’s matchup between FC Dallas and D.C. United presents quite the clash of styles.

Heavily reliant on a potent attack, FC Dallas hosts a D.C. United team that has built its reputation on stout defending, timely goals and a disciplined, methodical approach. That approach has been just a bit too methodical recently, as D.C. has scored one goal in three games, while FC Dallas has pitched three straight shutouts.

However, change may be nearing for a D.C. team in need of a spark without goalkeeper Bill Hamid, as the acquisition of Alvaro Saborio could bolster a sputtering attacking unit once the former RSL star joins from Gold Cup duty.

Sitting last in the West, the Rapids are riding two straight wins in games that have seen the team score five of the team’s 17 total goals. The Seattle Sounders  continue to flounder without Obafemi Martins and Clint Dempsey, losing four of the team’s past five contests.

Two teams on the outside looking in have a chance to re-establish playoff hopes with a win on Saturday night.

RSL enters the weekend on the heels of a major shakeup, as forward Alvaro Saborio was dealt to D.C. United for Luis Silva, who will not be available due to injury. Both RSL and the Dynamo will be hampered by international call-ups as well, as Kyle Beckerman, Nick Rimando and DaMarcus Beasley all join the U.S. Men’s National Team for Gold Cup play.

A Cascadia clash between two of the West’s top teams could go a long way in determining playoff positioning, as well as local bragging rights.

The Whitecaps and Timbers both enter the weekend as Western Conference contenders, making Saturday’s clash all the more important. Fresh off the signing of Designated Player Lucas Melano, the Timbers enter winners of six of eight games, propelling Caleb Porter’s side all the way up to fourth in the West. Above them, however, are the Whitecaps, losers of two straight, who are currently tied on points atop the table.

After experiencing a drubbing at the hands of the Montreal Impact last week , the Columbus Crew will be happy to see the Chicago Fire again on Sunday.

Despite last week’s result, the Crew sit second in the conference after Wednesday’s 1-0 win over the Fire, possessing both the league’s leading goalscorer in Kei Kamara and league-leading assist man in Ethan Finlay. The issues, however, have been in defense, as the Crew have conceded 29 times third most in the East. Luckily for them, the Fire have proven to be of little concern offensively, scoring just 19 times in 18 contests.