NASL Week 1: A Look Back 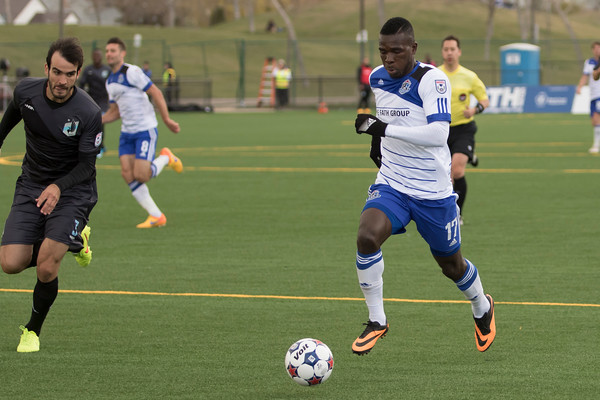 FC Edmonton only amassed nine points from 10 games in the Spring Season, but the team is already one-third of the way to that number after one game in the Fall.

The Canadian side smashed the San Antonio Scorpions on Sunday, scoring four goals and allowing none against the 2014 NASL Champions.

Elsewhere in the league, the New York Cosmos could only manage a 1-1 draw against Indy Eleven at home, a disappointing result for the first place team from the Spring.

The Carolina RailHawks followed up a strong Spring Season with a resounding victory over Minnesota United, while the Tampa Bay Rowdies beat the Atlanta Silverbacks and Ottawa Fury FC defeated the Jacksonville Armada.

Here’s a closer look at the action from the first week of the Fall Season:

The New York Cosmos, possibly drained from a run to the U.S. Open Cup Round of 16, were only able to manage a draw at home against a visiting Indy Eleven.

The Eleven got on the board first through Wojciech Wojcik in the 26th minute. Wojcik fired home from a volley after the ball was deflected high into the air at the top of the Cosmos’ box.

The Cosmos equalized late in the match, finally scoring in the 78th minute when Walter Restrepo put a shot past Kristian Nicht after a through ball from Marcos Senna.

The Eleven will host the Carolina Railhawks next Saturday evening. The Cosmos will play next on August 25, traveling to Indianapolis to play the Eleven again.

The Carolina RailHawks got off to a strong start against MLS-elect side Minnesota United, scoring twice in two minutes to be up 2-0 on United by the 17th minute in an eventual 3-1 win.

In the 15th minute, Simone Bracalello had a cracker of a strike from 20 yards out, curling one into the right upper 90 after being given too much time and space by United’s defense.

Then in the 17th minute, Tiyi Shipalane put the Railhawks up 2-0 by finishing off a cheeky chip attempt by Nazmi Albadawi. Albadawi’s shot deflected off of the crossbar and back into the middle of the box for Shipalane to fire home.

Minnesota got back into the match in the 26th minute thanks to a finish from Daniel Mendes. Mendes’ goal came off a low, driven cross whipped in by Kevin Venegas from the right side of the box.

But the RailHawks would seal the victory with a third goal in the 57th minute from Austin da Luz. Da Luz ran onto a through ball and embarrassed his defender to put a shot on target. Sammy Ndjock was able to save the first shot, but the rebound came back out to da Luz and the winger would not miss twice.

The RailHawks will host the Fort Lauderdale Strikers on Wednesday, while United will host Ottawa Fury FC on Saturday.

FC Edmonto made quite the statement on Saturday by routing the NASL’s defending champions.

The Eddies struck early with a second minute penalty kick goal from Sadi Jalali, and the game would then go scoreless until the 68th minute, when Lance Laing put Edmonton up 2-0 with another penalty.

The side would put up three goals in a span of 15 minutes, with later strikes coming from Hanson Boakai and another from Laing in the 74th and 83rd minutes, respectively. Boakai put the ball in the back of the net as he fell between two Scorpions defenders in the center of the box, while Laing curled in a fantastic free kick into the left upper 90.

FC Edmonton will travel to Fort Lauderdale on Saturday, while San Antonio will host the Tampa Bay Rowdies on the same day.

Goals from Mason Trafford and Tom Heinemann on either side of halftime gave Ottawa Fury FC a 2-0 win at home against the Jacksonville Armada.

Trafford scored in the 13th minute, putting home a rebound from a Andrew Wiedeman shot. Heinemann headed home a Brandon Poltroneiri cross for the second goal, putting the ball high over the keeper.

Jacksonville will travel to Atlanta to play the Silverbacks on Saturday, while Ottawa features again Saturday with a visit to Minnesota United.

The Tampa Bay Rowdies beat the Atlanta Silverbacks for the second time in three weeks, after ending the Spring Season with a win over its southern rivals.

The scoring opened in the 22nd minute, when a shot from Brian Shriver forced an own goal by the Silverbacks. C.J. Cochran got a hand on the ball, but centerback Rauwshawn McKenzie pushed the ball into the back of the net when trying to clear it.

The next goal came from Darnell King in the 30th minute. King cut inside the box to find space and fire his shot past Cochran.

In the 36th minute, the Silverbacks benefitted from an own goal by Rowdies defender Stefan Antonijevic. Pressure from a Silverbacks corner kick led to Antonijevic’s mistake.

Following the win, the Rowdies return to action Saturday against the San Antonio Scorpions, while the Silverbacks face off with the Armada.