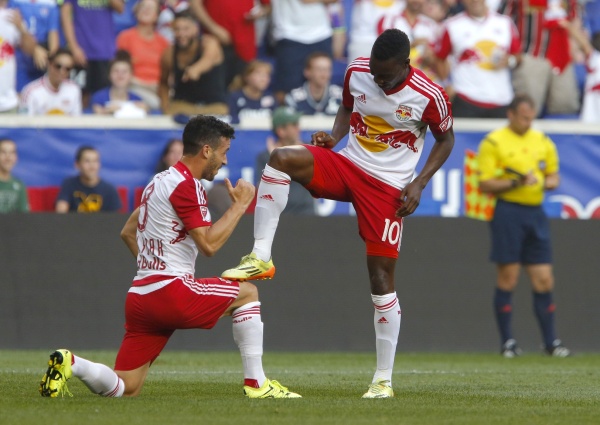 HARRISON, N.J. – The New York Red Bulls entered Saturday night without five of their usual options on the backline, so they opted not to spend too much time defending.

Instead, the Red Bulls proved that the best defense is a strong offense, pouring in three goals over the first 12 minutes en route to a 4-1 win over the New England Revolution at Red Bull Arena.

“Let’s be honest,” Red Bulls captain Dax McCarty said. “They got the best of us last year (in the Eastern Conference Final) and they denied us a chance to go to MLS Cup, which was really frustrating. So every time we play them, we want to step on the field and set the tone.”

With both Chris Duvall and Ronald Zubar injured and Roy Miller, Kemar Lawrence and Karl Ouimette on international duty at the Gold Cup, the Red Bulls were far from full strength in the back. To make matters worse, they were also without head coach Jesse Marsch, who was suspended as a result of his ejection from last week’s lost against Columbus Crew SC.

Bradley Wright-Phillips and the Red Bulls attack were more than willing to cover the holes.

“I thought our guys came out with the right mindset from the get go,” Red Bulls assistant coach Denis Hamlett, who filled in for Marsch, said. “They were aggressive, in attack mode. The game, the first 15 minutes we were pretty good – probably the best we’ve played all year.”

The English striker opened the scoring with a simple header just four minutes in when Lloyd Sam sent a cross from the end line back across goal.

Five minutes later, it was Sam’s turn to provide the finishing touch, as he slid a shot past Revolution goalkeeper Bobby Shuttleworth after an interchange between Wright-Phillips and Mike Grella at the top of the penalty area.

In the 12th minute, Wright-Phillips made it a brace. The move began when Sacha Kljestan found Dax McCarty in the midfield. The captain promptly laid off a one-touch pass to Wright-Phillips, which put him in on goal to extend the lead.

“We want to make sure that at home we’re in attack mode,” Hamlett said. “We want to take the game to the team and tonight those guys were able to do that. I think once they get going, they just finish their chances.

“We’ve created a lot of chances this year at home, we just didn’t finish them. Tonight we were able to finish them and I think it makes the game a little bit easier.”

Despite the sizable cushion, the Revolution managed to put a bit of doubt in the Red Bulls’s minds just before halftime.

The tension came when Andy Dorman got one back for the Revs in the 37th minute. His point-blank touch on a Lee Nguyen cross was originally disallowed for offside by the sideline referee, but the head official correctly overruled the decision and allowed the goal to stand.

That pressure evaporated in the 56th minute, however, when left back Anthony Wallace lashed a 25-yard shot that ricocheted off two Revolution players and into the back of the net for his first MLS goal.

While Wallace and the rest of the Red Bulls’ shorthanded backline proved strong enough to see out the win, the Revolution’s defense was victimized once again.

The Revs have now allowed a league-worst 33 goals through 21 games. They have also conceded at least two goals in each of their last five matches, all losses.

In fact, the Revs have now lost seven of their last 13 matches across all competitions and notches just one win since beating the Red Bulls at home on May 2. As a result, they’ve slipped to fifth place in the Eastern Conference and face a visit from an improving New York City FC squad on July 18.

The Red Bulls’ form has been starkly different, as they’ve won three of their last four matches after a difficult end to the spring. In turn, the club has moved up the standings and into second place amidst the packed Eastern Conference playoff race. Their next action comes on the road against a fellow playoff contender, Orlando City, on July 18.