Galaxy come back to beat Earthquakes on Keane, Gerrard heroics 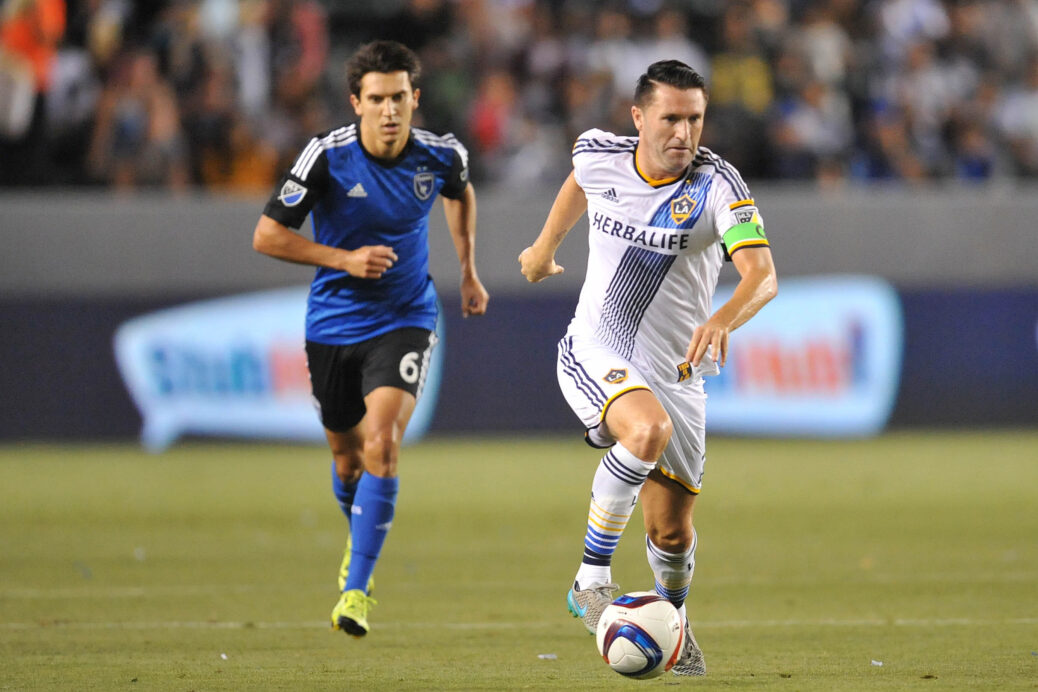 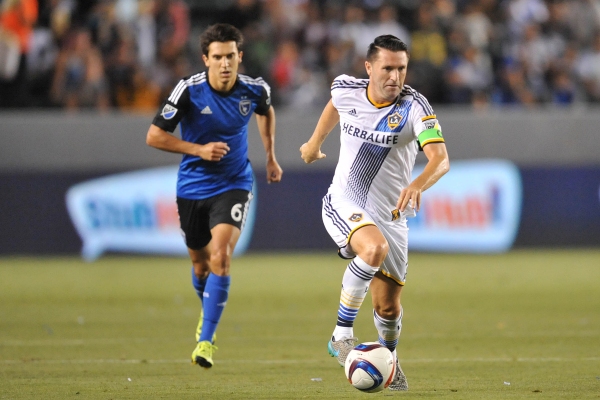 CARSON, Calif. – Major League Soccer got a look at the future tonight, and for the Galaxy, the future looks bright.

Irish international Robbie Keane contributed his second hat trick in as many home games, and Liverpool legend Steven Gerrard added a goal and an assist, as the LA Galaxy overcame an early two goal deficit to race past the San Jose Earthquakes, 5-2, before a raucous sold out crowd of 27.000 at the Stub Hub Center.

Keane’s goal in the run of play gave the Galaxy the lead in the 64th minute, and was assisted by Gerrard on a lovely set piece play. The Galaxy were awarded the free kick when Shea Salinas pulled down Robbie Rogers just outside the area, near the San Jose end line. When signaled by Gerrard, Keane made a hard run at the near post from the six yard line, and Gerrard found him, slamming the free kick hard and low directly in front of the San Jose goalkeeper. Keane stepped in front and nicked the ball off the outside of his foot and into the back of the net.

“We kinda whispered to each other before he went over” said Keane, discussing his combination goal with Gerrard. “we had a plan. It was all about the ball in. I just managed to get a nice touch on it.”

Keane added two goals on penalty kicks, both converted with the use of his patented stutter-step approach to the ball. Each time he was able to get Quakes goalkeeper David Bingham to commit early, and each time Keane buried the ball to the opposite side.

Gerrard’s goal came off a play he started, when he broke forward with the ball and forced the Quakes back line into hasty pursuit. He squared the ball to Keane and missed, but Keane pivoted and sent the ball wide to Baggio Husidic. Husidic fired a hard cross into the area, and when Clarence Goodson deflected the pass, there were two Galaxy white shirts waiting for the open shot. Wisely, journeyman midfielder Kenny Walker stepped out of the way of the oncoming Gerrard, and the man they call ‘Sir Steven’ stepped forward and fired and tasty low curling shot past a diving Bingham and into the far side netting.

“I was quite disappointed in the previous two games not to get goals. You know, I had two good chances” said Gerrard, referring to his first two appearances with the Galaxy, both out-of-league competitions over the past week. “But I have belief in myself. I know that if I keep getting in the right positions, the goals will come. I was very pleased to get off the mark, and even more pleased for Robbie to get another hat trick.”

The Galaxy did not look stellar in the first half an hour. San Jose – and specifically Quincy Amarikwa – twice caught the Galaxy back line napping, and twice put away chances.  On the first, Sana Nyassi beat Robbie Rogers down the right flank, then served a perfect low cross onto the foot of Amarikwa, who easily converted the chance.

“They played well. Our first twenty minutes of the game was not good. It was sloppy” said Galaxy head coach Bruce Arena after the match. “Last twenty, twenty five minutes was pretty good.  And the second half was a pretty solid half.  I thought our guys responded real well.”

Only three minutes later, San Jose was awarded a direct free kick, and when the service clanged loose inside the area, it was once again Amarikwa in the right place at the right time, and he banged home the ball with his left foot to give the Quakes a surprising two goal lead in their rival’s home stadium.

But the lead was short lived. The first Keane PK came only six minutes later, and then Gerrard opened his MLS account in the 37th minute to level the match, bring joy back to the home crowd, and give the Galaxy all the momentum it needed to run away with the match in the second half.

“I felt like a kid out there again.” continued Gerrard, when asked about his impressions overall impressions of his first MLS match. “I’ve been looking forward to this game for a long time. I love playing in derbies. I wish I could play them every week. I used to love the rivalry against Everton and Manchester United back home, and I look forward to these battles moving forward.”

Sebastian Lleget, who looked every bit up to the task of joining the attack with legends like Keane and Gerrard, added the game’s final tally when he headed in a loose ball in extra time to close out the scoring. With Gyasi Zardes gone for most of July with the U.S. National team, Lleget has quietly put together a remarkable season. The twenty two year old now has five goals in six MLS appearances, and six goals in eight competitions in total.

“He played a terrific game. He’s got a unique combination of speed, power, and balance.” said Bruce Arena about his signing from West Ham. “He’s just been very good for us.”

The Quakes will now wait nine days before traveling to Vancouver to face the Whitecaps on July 26th.

The Galaxy will have much less time to rest.  They head fifteen miles north to take on Champions League champions FC Barcelona in an International Champions Cup match at the Rose Bowl, before traveling to Houston to face the Dynamo on July 26th.